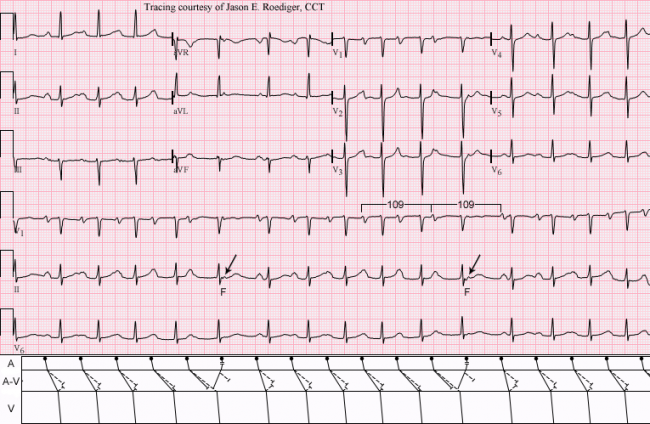 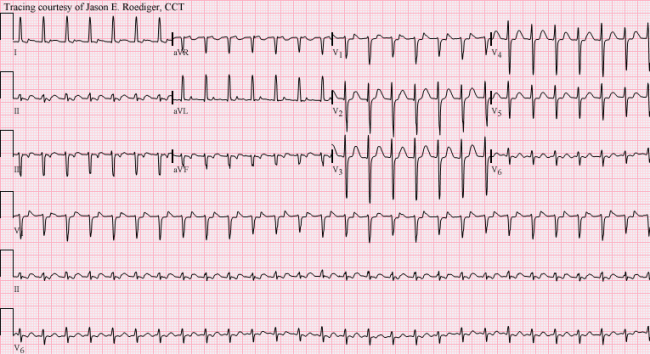 Patient's clinical data:  47-year-old black man.  Another serial ECG (seen below) showed a supraventricular tachycardia (SVT) at a rate of 164/min that was diagnosed by an Electrophysiologist as atrioventricular nodal reentrant tachycardia (AVNRT).  How does knowing the mechanism of AVNRT help you in determining the nature of the mechanism in this week's ECG.

This shares some similarities with previous ECGs that I've posted but this time there is an extra twist.

Is this really what it appears to be?  Well, . . . yes and no.  It depends on whether you're referring to how it manifests electrocardiographically on the surface tracing OR electrophysiologically on a cellular level.  Don't make the mistake of rushing to make a hasty judgement and be sure to pay attention to subtle detail.  As usual, a heavily detailed laddergram will reveal all!

Atypical Wenckebach in the presence of dual AV pathways

Looks like atypical 6:5 Wenckebach... The first beats of the repeating cycle (beats 2,7,13) have a progressively shorter initial PRI...in addition, the R-R intervals seem to lengthen rather than shorten, especially at the end of the cycle. I would theorize that this is due to dual AV pathways, which we can assume are present dorm the diagnosis of AVNRT. I look forward to better and more detailed explanations from the regular suspects!

I agree entirely with Dave's concise summary. Ideally - a "typical" AV Wenckebach cycle is characterized by the following "footprints" of Wenckebach:

While most of the above "footprints" are present - as per Dave - this just doesn't look right for "typical" AV Wenckebach:

Jason urged us to consider something other than "the obvious" - with hint that a reliable source diagnosed AVNRT in this patient - ergo we know there are dual AV nodal pathways. These must be contributing to the unusual features of this example of Wenckebach - presumably with alternate conduction down one and then the other pathway (depending on which pathway is refractory at any given point in time) - BUT - the full answer to this tracing requires a laddergram that only Jason can draw. Awaiting Jason's reply!

Shot in the dark!

Sitting here in my hotel room I figured I should take a shot at this!

If you look at the second PRi for each Wenckebach-group with the shorter initial PRi's you'll find they match the initial PRi seen on the strip.

I meant "fast pathway (beta)" and "When the fast pathway 'fails' the now fast(er) pathway is used".

yes i agree Wenckebach. Also LAD, LAFB and LQT. It would be nice to see the ether EKG not seen.

Was the AVNRT before this ECG, and how was it treated?  Could the treatment be a factor is this atypical presentation of Wenckebach?

Will have to investigate

As is often the case, I usually post these ECGs with the intention of having members provide a "cold" read on the ECG as it presents in its original form.  I'll try to find out more about this patient's past medical history and provide some additional follow-up.  I'll also post their ECG of AVNRT and attempt to find out if it occurred before or after the above ECG.  Treatment as well.  Additional info is forthcoming!

So I'm by no means confident, but I'll toss my hat in the right as well.

Type I AV block high in the AV-node.

The node then diverges into two pathways somewhere below the level of the block.

The primary AV conduction pathway is the "fast" path.

There is a second "slow" AV-nodal pathway that allows for retrograde conduction, but in a ladder sense I would describe it as being quite "low" in the AV-node. The slow path then exhibits concealed retrograde conduction higher and higher back into the AV node as the longer PR-intervals allow the higher portions of the AV-node to recover more with each attempted echo, until...

...with varying 5:1 and 6:1 conduction ratio's, the signal finally manages to escape from the retrograde slow pathway and back into the atria. The timing of this retrorade p-wave is very close to the time of the next sinus beat, so there may even be a small degree of atrial fusion, but it looks just a little to early to say that definitively.

This retrograde p-wave gives the area of the type I block a break, "resetting" it back to it's starting PRi, even though a true Wenkebach cycle with a block sinus p-wave has not actually occured!

My Perspective - on Dual AV Nodal Pathways and this Rhythm

Permalink Submitted by [email protected] on Wed, 03/27/2013 - 06:53
Now that I've seen Jason's illustrative laddergram (which I'm sure he is about to post here) - I'll add a few of thoughts to hopefully add perspective:

I’ve watched with fascination as this story has unfolded, and learnt quite a bit in the process. But has the riddle been completely solved? What troubles me slightly is the big increase in PR interval not in the last beat of each Wenckebach sequence, but in the penultimate beat. In the 1st sequence the PR intervals are approximately 220, 260, 280, 360 and 480ms. In the 2nd sequence they are 180, 220, 260, 300, 380 and 460ms. For me it is the jumps from 280 to 360ms in the 1st sequence and from 300 to 380ms in the 2nd that are anomalous Wenckebach behaviour and I wonder if they can be explained by postulating that conduction switches from fast to slow pathway in the penultimate rather than last beat of each sequence. If this is the case then the 1st impulse to conduct down the slow pathway finds that the fast pathway is still refractory from the previous beat and is unable to enter it retrogradely. The next beat shows a big increase in PR interval, not because conduction switches at this point but simply because it is the 2nd PR interval in this ‘new’, slow pathway Wenckebach sequence.  In this case the PR interval is sufficiently long that the fast pathway has been able to recover and allow retrograde conduction and subsequent atrial fusion as has already been described.

Is this possible? I await further enlightenment!

Any EP docs following this case?

Several different theories have be postulated but I think they all share a common theme which is the dual A-V nodal conduction.  Unfortunately, without the benefit of a His-bundle recording we are all limited to pure speculation and our best educated guesses.  I've stated my interpretation on FB.  This diagnosis lies in the purview of the true rhythm experts - the electrophsiologists.  If there are any EP docs out there who would like to weigh in on this case, we would be most appreciative!

COMMENTS:
This is my version of the laddergram for this ECG. I say “my version” because both Vince DiGiulio and Christopher Watford constructed their own versions of laddergrams for this ECG.  In the A-V tier, the solid (i.e., –––––––––) lines represent conduction in the fast pathway (FP) and the dashed (i.e., - - - - - - - -) lines represent conduction in the slow pathway (SP). The two oblique arrows are pointing towards atrial fusion (F) between the descending sinus impulse and the ascending atrial "echo". The sinus rate and rhythm remains undisturbed since the sinus node is not discharged or reset. The cycle of the two conducted sinus beats flanking the atrial fusion is exactly equal to two of the preceding sinus cycles (109 = 109) in hundredths of a second. There is progressive delay of conduction in the FP until either (1.) conduction is blocked (i.e., fails) in the FP and thereby allows or permits the SP to transmit the impulse by default since the SP and the FP are not vying or competing for the honor of transmitting the impulse, or (2.) the conduction time of the FP invariably exceeds that of the SP and conduction effectively "jumps" over from one to the other. In other words, the pathway that can conduct the impulse more rapidly ends up being the one that succeeds in transmitting the impulse to the ventricles. More often than not, the FP is transmitting the majority of the impulses, but once its conduction time equals or exceeds the SP's conduction time, then conditions are primed for having "dual A-V nodal conduction". On the last (and disproportionately long) P-R interval, there is micro-reentry in the A-V node. This is the exact same mechanism responsible for the patient's AVNRT. In the laddergram, each successive sinus impulse advances further and further down the SP in an anterograde direction from the proximal end of the A-V node to the distal end. Conversely, at the distal (i.e., lower) end of the A-V node, retrograde conduction is retreating backwards further and further with each consecutive impulse.  On a purely electrocardiographic level, there is only an attempted Wenckebach without any true "dropped" beats. However, on an electrophysiological level, there is a 6:5 Wenckebach period taking place in the fast pathway.