This ECG was taken from a 78-year-old man who was experiencing chest pressure in the morning, after having left shoulder pain since the night before. He has a history of hypertension and hypercholesterolemia, and has an implanted pacemaker.

What does the ECG show?  The ECG shows an atrial paced rhythm, with two premature beats, beats number 5 and 12.  These are probably PVCs.  The patient has a functioning AV conduction system, so the paced atrial beats are conducting through the AV node and producing QRS complexes.  In the interventricular conduction system, the impulse encounters right bundle branch block. This causes each QRS to have an “extra” wave attached at the end, representing slightly delayed depolarization of the right ventricle.  Instead of an “rS” pattern in V1, for example, we see “rSR’ “.  The slight delay causes the QRS to be widened, as we are measuring the two ventricles separately, rather than synchronously.

There is definite ST segment elevation in V2 and V3, and the shape of the ST segment is straight, having lost it’s normal “concave upward” appearance.  In an ECG taken three minutes later, the STE extends to V4.

Do the pacemaker or the right bundle branch block prevent us from diagnosing an ST-elevation M.I.?  The answer to that is a resounding “NO!” Pacemakers can sometimes make it difficult to assess ST elevation because ventricular pacing causes ST segment changes.  Pacing the right ventricle causes a depolarization delay in the left ventricle as the impulse travels “cell to cell” across the LV.  This means an RV-paced beat will resemble a PVC from the RV.  When LV depolarization is altered, repolarization will also be altered, causing ST elevation in leads with negative QRS complexes, and ST depression is leads with upright QRSs. These are called discordant ST changes. These changes are proportionate to the height or depth of the QRS, with very minimal or no ST changes in leads with short or biphasic QRS complexes.  We don’t have to worry about that in this situation – the pacemaker is not pacing the ventricles. 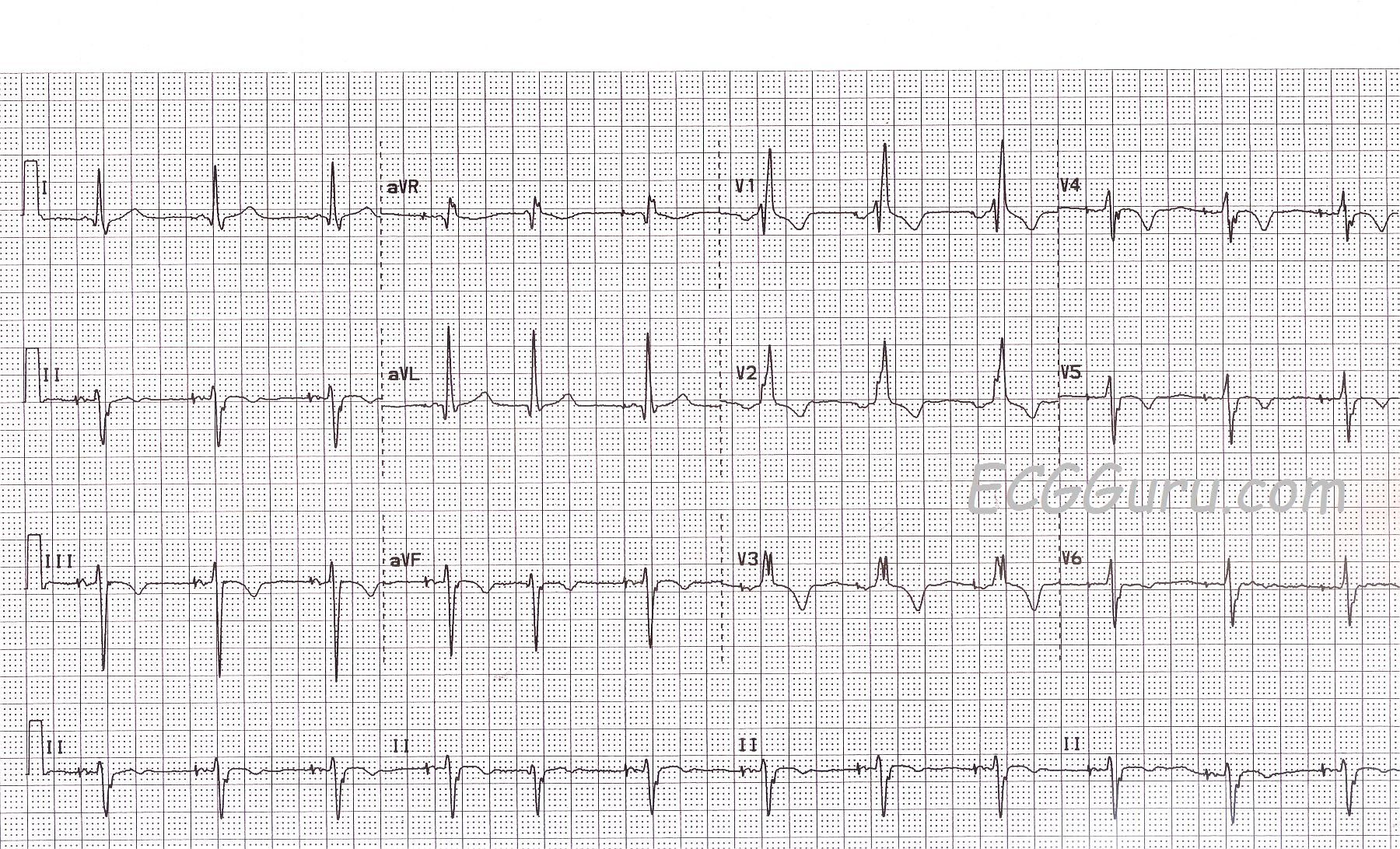 No instructor's collection should be without an atrial paced rhythm OR a right bundle branch block.  Here, you get both.  First, the atrial pacing.  This patient had a sinus node problem, but his AV conduction system was functional (if not perfect).  At this time, he is able to conduct impulses from the atria to the ventricles.  What he cannot do is reliably produce the impulse in his atria.   So, this pacemaker is currently pacing the right atrium, producing a paced "P" wave, which is then conducted to the ventricles.  The fifth beat on the strip shows a "native" beat - one produced by the patient.  No P wave is seen, so it is presumed to be a junctional beat.

As for conduction through the ventricles, there is a right bundle branch block.  The left bundle branch is ensuring that the ventricles receive the depolarization "message", and the ventricles are depolarizing and contracting.  However, the right ventricle gets the message a little late, since is arrives from the left ventricle, and not through a functioning right bundle branch.  This produces a terminal wave on each QRS that represents this delayed depolarization of the right ventricle.  In leads oriented to the left side of the heart, like I and V6, it is seen as a wide little S wave.  In V1, which is oriented to the patient's right, we see an R prime (R'), producing the easily-recognizable rSR' pattern of RBBB.

For your more advanced students, this patient has atypical T waves for RBBB.  Normally, the T waves axes should be OPPOSITE that of the terminal portion of the QRS.  So, Lead V1 correctly shows an inverted T wave, since the R' is a positive deflection.  There are inverted T waves in Leads III, aVF (II is biphasic), as well as in V4, V5, and V6.  We expected upright T waves here. Because we do not have clinical information for this patient, we will call them "non-specific" T wave changes, remembering that inverted T waves can be a sign of ischemia.

This strip for your basic students is a nice example of atrial pacing in a patient with an intact interventricular conduction system.  Generally, the pacemaker will behave this way when the sinus node is not functioning well enough to provide adequate rate for the patient, and the conduction system from the AV node down is functioning properly.

Pacemakers in the modern age are very complicated to understand for the beginner, and pacemaker programming and malfunctions often cannot be determined from a simple rhythm strip.  It can be a challenge to teach beginning students about the programming options available today.  This strip is nice because it is clear, and the pacer spikes are readily seen.  The patient is being paced 100% of the time in this strip.

Atrial Pacing in a Patient With Acute Inferior Wall M.I. 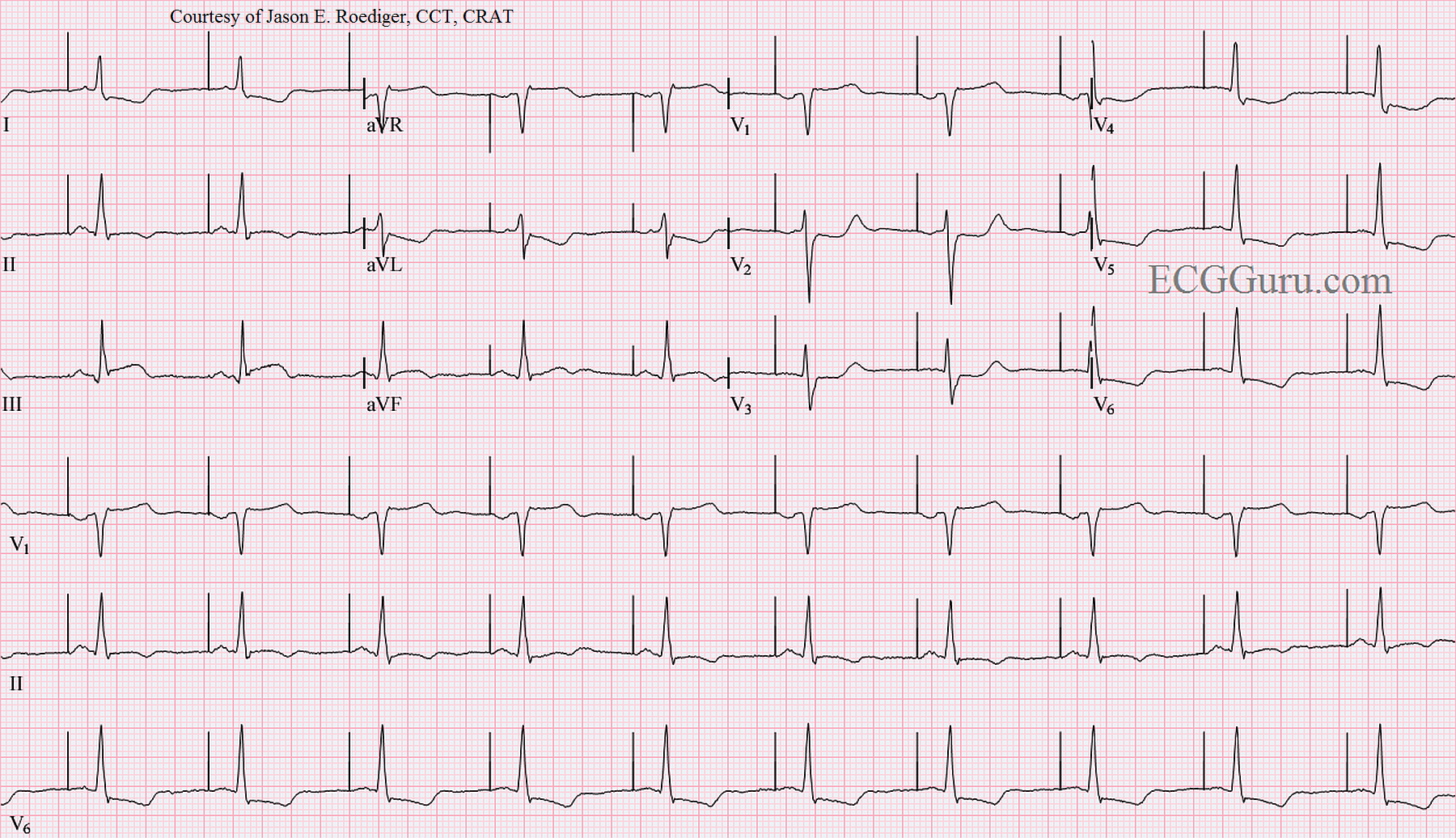 Some people have been taught (incorrectly) that an electronic pacemaker prevents us from seeing an acute ST elevation M.I.  Not true.  It can be difficult to interpret ST elevation M.I. in the setting of WIDE QRS complexes.  When this situation exists, it is best left to the experienced ECG interpreter to determine whether there is STEMI.  In this ECG, we see ATRIAL pacing.  The patient has an intact AV conduction system.  The pacemaker paces the atria, and the impulse continues normally through the AV node and the ventricles.  The QRS that results is normal (narrow).  In this situation, the ST segments are accurate for determining ST elevation and depression.

This patient is a 74-year-old man who complained of chest pain for five days before presenting to his primary physician at the outpatient clinic.  After obtaining this ECG, the PCP transferred his patient to the Emergency Department.  He was admitted to the CCU with troponin level of 2.13 ng/ML. (Normal < 1.5 ML)

Our thanks to Jason Roediger, ECG GURU, for contributing this ECG.