The Patient:  This ECG is from a 59-year-old woman who was found by the EMS crew to be unresponsive, with agonal respirations at about 6 breaths per minute. Her pulse was thready at the carotid, and absent peripherally. Her skin was pale, cool, and mottled.  Her BP via the monitor is 81/40, peripheral pulses not being palpable.  An initial rhythm strip showed sinus rhythm at 75 bpm with right bundle branch block and ST elevation.

The patient’s husband gave a history of “difficulty breathing” since sometime this morning, alcohol dependence, hypertension, tobacco use, and insomnia. He said she had been drinking heavily for several weeks.

She was immediately ventilated and intubated, and an intraosseous infusion line established.  A12-lead ECG was done, and it showed a dramatic change in the rhythm and ST segments over the initial strip. She was transported to a nearby hospital with CPR support. She achieved return of spontaneous circulation (ROSC) at the Emergency Department, after having three doses of epinephrine.  Follow up with the ED physician revealed that the patient had suffered a massive gastrointestinal bleed.  This patient, due to loss of a critical amount of blood, had low blood pressure and very poor perfusion, which resulted in damage to her heart (and possibly other organs as well). I do not have further follow up, but will update this if I receive more information.

This ECG was obtained from a 37-year-old male who was complaining of non-radiating substernal chest pain.  He offered no significant medical history.  He denied taking any medications.  He was hypertensive and bradycardic on arrival in the Emergency Dept. He was alert and ambulatory.  Approximately 20 minutes after first being seen by paramedics, he suffered an episode of ventricular fibrillation in the E.D.  He was resuscitated and sent to the cath lab.  His coronary arteries were without lesions.  We do not know the results of any lab tests, including troponins.

What does the ECG show?  The rhythm is sinus bradycardia at a rate of 48 bpm. The PR, QTc, intervals and QRS duration are normal.  The QRS frontal plane axis is normal and there is good R wave progression in the precordial leads.  There is ST segment elevation in Leads I, aVL, V2, and V3, with reciprocal ST depression in Leads III and aVF.  The ST segments that are elevated retain a relatively “normal” shape, being concave upward. There are no abnormal T wave inversions or pathological Q waves. 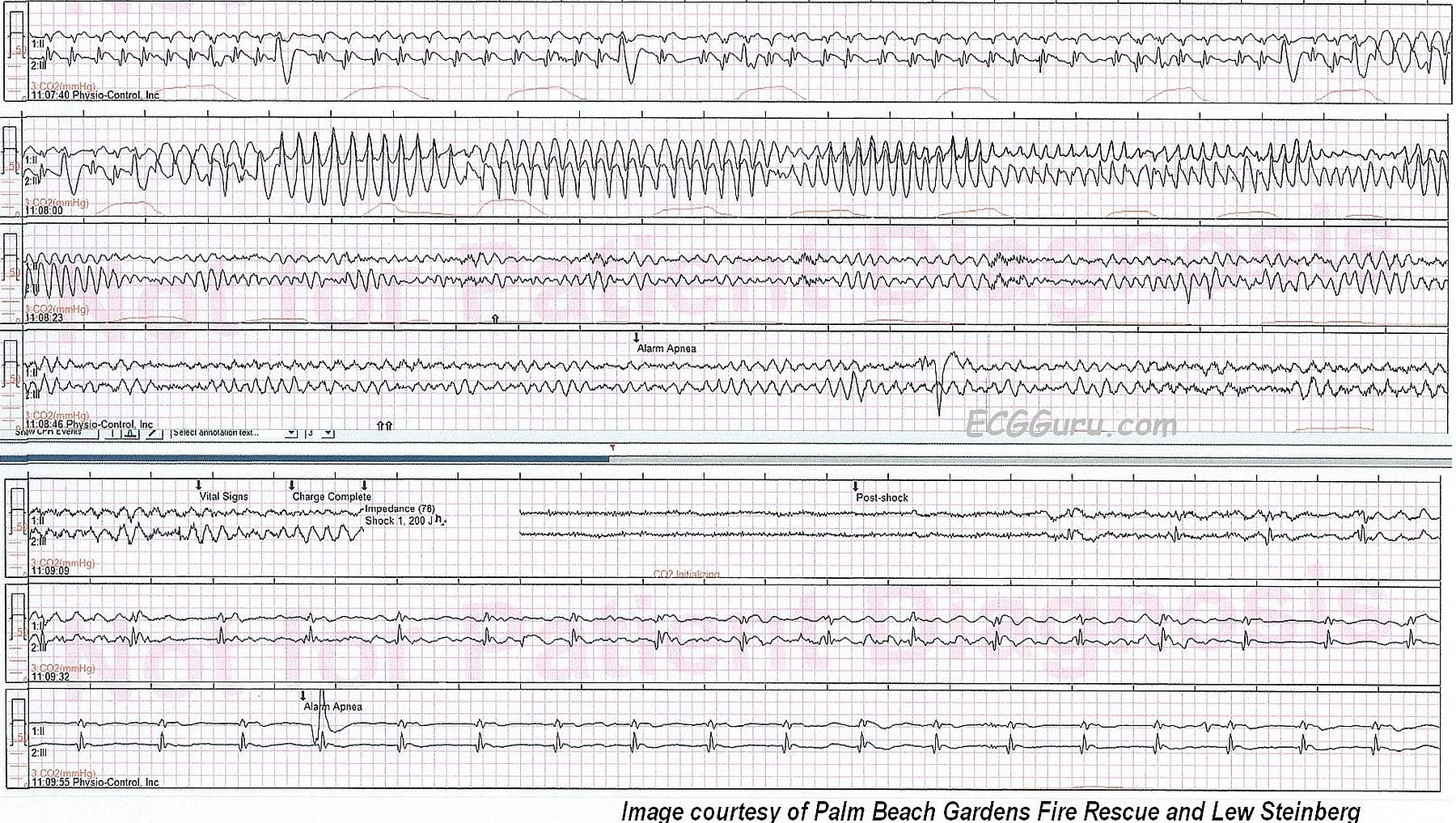 A paramedic crew responded to the office of a local physician. A 61-year-old male presented with a one-week history of chest pain and shortness of breath. He had a previously undiagnosed atrial fibrillation with rapid ventricular response and left bundle branch block, but was alert. Shortly after transport commenced, the patient became unresponsive with Torsades de Pointes, which rapidly degenerated into ventricular fibrillation. The paramedic placed pads and defibrillated within one minute.  After two minutes of compressions, the patient had a fairly regular rhythm with return of spontaneous circulation.  Transport time was short.  On catheterization, the patient was found to have severe coronary artery disease, requiring coronary artery bypass graft surgery (CABG) A balloon pump was inserted in an attempt to strengthen him for surgery.

What is the rhythm?   The 12-lead ECG presented here shows atrial fibrillation at a rate of 138 per minute.  The rhythm is irregularly-irregular with no P waves.  Since the patient had not yet been diagnosed with atrial fib, obviously no therapy had been initiated to control the rate. There is a PVC near the end of the strip.

How Do You Teach Early Repolarization Vs. Acute M.I.?

Our expert today is Dr. Ken Grauer, M.D., a frequent contributer to the ECG Guru.

KEN GRAUER, MD is Professor Emeritus (Dept. Community Health/Family Medicine, College of Medicine, University of Florida in Gainesville).
Dr. Grauer has been a leading family physician educator for over 30 years. During that time he has published (as principal author) more than 10 books and numerous study aids on the topics of ECG interpretation, cardiac arrhythmias, and ACLS (including an ongoing Educational ECG Blog).

For my answer, please check out my FULL REVIEW on assessing ST Elevation from Early Repol vs Acute MI - GO TO: https://www.kg-ekgpress.com/ecg_-_early_repolarization/