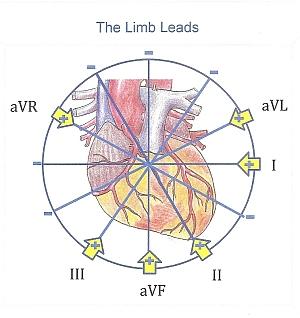 Dr. Jones, do you have any tips to help me teach axis determination to my students?

That can be a lot of drawing of lines and angles and expenditure of brain power – especially after being awake and on duty most of the night. Well… relax! It doesn’t have to be difficult at all. And you don’t have to draw any diagrams!

First of all there are three generalizations about axes that you should know:

FIRST, forget about axes of +23 degrees, -14 degrees or +61 degrees. You never – let me repeat – NEVER have to be so exact in electrocardiography unless you are calculating the QRS-T angle (and most healthcare providers don’t need to do that). 99 % of the time if you are within 15° to 30° of the correct mean axis you are doing JUST FINE! The reason is because 99 % of the time we just want to know if the axis is normal or not, or if it is located closer to one of the extremes of axis (the “extremes” being left axis deviation or right axis deviation). Besides, the mean QRS axis is very labile – just taking a deep breath can change it considerably!

The first axis we are concerned about is the mean QRS axis in the frontal plane. There are four leads that we use to tell us what we need to know.

Second, we often want to know if the “normal” mean axis is tending rightward or leftward. We do that by looking at leads aVL and III. If the QRS complex is predominantly negative in aVL, then it has to be more positive than +60° (rightward). If the QRS is predominantly negative in III, then it has to be more negative than +30° (leftward). If the QRS complexes in leads aVL and III are both positive, then the mean QRS axis in the frontal plane will lie between +60° and +30° and could not be more “NORMAL!” 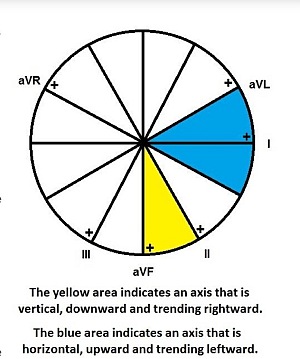 Tall, thin people usually have long, elongated hearts that seem to just “hang” in their chest (and some actually do!). We would expect these individuals to have hearts that are nearly vertical, so we would also expect to see a QRS complex in aVL that is predominantly negative or maybe equiphasic. If the QRS in aVL were very positive, we would wonder about the presence of a conduction disturbance that sends the terminal depolarization upwards. (FYI, in electrocardiography, when we say an impulse is traveling “upwards,” we really mean “to the left.” If we say it’s traveling “downwards, we really mean “to the right.”)

Short, stocky people tend to have hearts that lie a bit more horizontally on the diaphragm, so we would expect their mean QRS axis in the frontal plane to be more horizontal. Therefore, we shouldn’t be surprised to see that lead III is predominantly negative or equiphasic.

So if we look at a 12-lead ECG and quickly see that the QRS complexes in both leads I and II are positive but the QRS complex in lead III is negative, we would say that although the mean QRS axis (or vector) in the frontal plane is normal, it is also somewhat leftward or horizontal. If the QRS in aVL were negative instead, then we would report the mean QRS axis as somewhat rightward or vertical.

Years ago, we were taught that any axis more negative than 0° was left axis deviation. Then, it was decided that the axis could be up to -30° and still be normal. This presented a lot of confusion regarding how to refer to a normal axis. Basically, if the mean QRS axis in the frontal plane falls between -30° and +90° call it NORMAL. If it falls between -30° and -90° call it LEFT AXIS DEVIATION. Some people still want to refer to the area from 0° to -30° as left axis deviation but with a normal axis and they do make a good argument. The issue of how to refer to that section between 0° and -30° still isn’t completely resolved.

Let’s talk about P waves. Anytime I mention “P wave axis” or “P wave vector” I usually see eyes rolling up to the ceiling. But the P wave axis is determined exactly the same way as the QRS axis!

That being said, we usually want to know the general direction of the P wave axis (I’m going to stop repeating “mean axis” and “in the frontal plane”). Abnormal P wave axes tend to be vertically oriented.

Normally, the P wave axis is almost parallel to the lead II axis and so it tends to cluster around +60°. A P wave in the frontal plane that is moving rightward – i.e., more inferiorly or vertically – is very characteristic of chronic lung disease such as COPD or an acute strain on the right side of the heart such as a pulmonary embolus.

If the P wave vector becomes more vertically oriented, what happens to the P wave in lead I? Lead I is perfectly horizontal on the Einthoven triangle, so if the P axis is vertical, then it must be perpendicular to lead I. When a vector is perpendicular to a lead it can be either isoelectric or equiphasic. In the case of the P wave, it is usually isoelectric – or nearly so. In any case, a P wave with a vertical axis will be very small or totally isoelectric in lead I. Obviously, we normally do see P waves in lead I so equally obviously the P wave axis is usually not particularly vertical.

The T wave axis can be handled exactly the same way as the QRS and P wave axes. However, we really don’t look at the T wave axis that much. When we do, it’s usually in reference to the angle formed between the T wave axis and the QRS axis (on the hexaxial reference grid) called the QRS-T angle. In calculating the QRS-T angle, we really do want to use axes that are as accurate as possible. However, determining those axes to the nearest degree isn’t really as difficult as you might imagine. Here’s my method:

I use the R and T axes printed on the ECG printout. Seriously… this is how 98% of all physicians calculate the QRS-T angle (and the other 2% are liars!).

Joking aside, advanced electrocardiographers do sometimes use the T wave axis to interpret 12-lead ECGs, but most healthcare providers need only note that the T wave is inverted in certain leads under certain conditions.

I said there were three generalizations about axes, so here’s the third…

Let’s focus on S waves. Let’s say we are dealing with a heart that has a nearly vertical QRS axis with predominantly negative QRS complexes in leads II, III and aVF. That means that the ventricular depolarization is heading straight up. But what if the deepest S wave is in lead III? That would tell us that the preponderance of the electrical force is pointing up and to the left (around -60° and parallel to the lead III axis) which would point to the basal-lateral area of the left ventricle. Therefore, we likely have a heart with a problem in the left ventricle – perhaps in the area served by the LAD, LCx or ramus intermedius. One would also like to see what’s happening in lead aVL because it’s up in that area also. Usually the problem will be LVH or LAFB (anterior hemiblock). And what if lead II has the deepest S wave? That would indicate that the QRS axis is likely parallel (or nearly so) to lead II and traveling away from its positive pole which would be up and to the right (around -120°) – likely a problem in the right ventricle or the RCA circulation. If that were the case, one would want to look at lead aVR because it’s up there in that vicinity, too.

Just remember that when we speak of positivity or negativity of a deflection in any of the frontal leads, we are talking about vertical or horizontal axis. Positivity or negativity in lead I is considered the “gold standard” for determining “rightwardness” or “leftwardness,” but it often really isn’t that useful for the simple reason that it is rather unusual to see predominantly negative complexes in lead I. That’s because axes in the frontal plane are typically normal. So we have to look at other leads that indicate a rightward tendency or leftward tendency within the context of a normal axis and those leads are lead III (negativity indicates “leftwardness”) and lead aVL (negativity indicates “rightwardness”). The inferior leads – II, III and aVF – indicate verticality (downward or rightward if positive, upward or leftward if negative).

So, in the final analysis, you usually just want to know if you have a vertical axis or a horizontal axis, if the axis is outside the limits of normality and occasionally, when the axis is normal, you may want to know if it is trending leftward or rightward. Now you know how to determine this information without doing any diagraming or calculating. 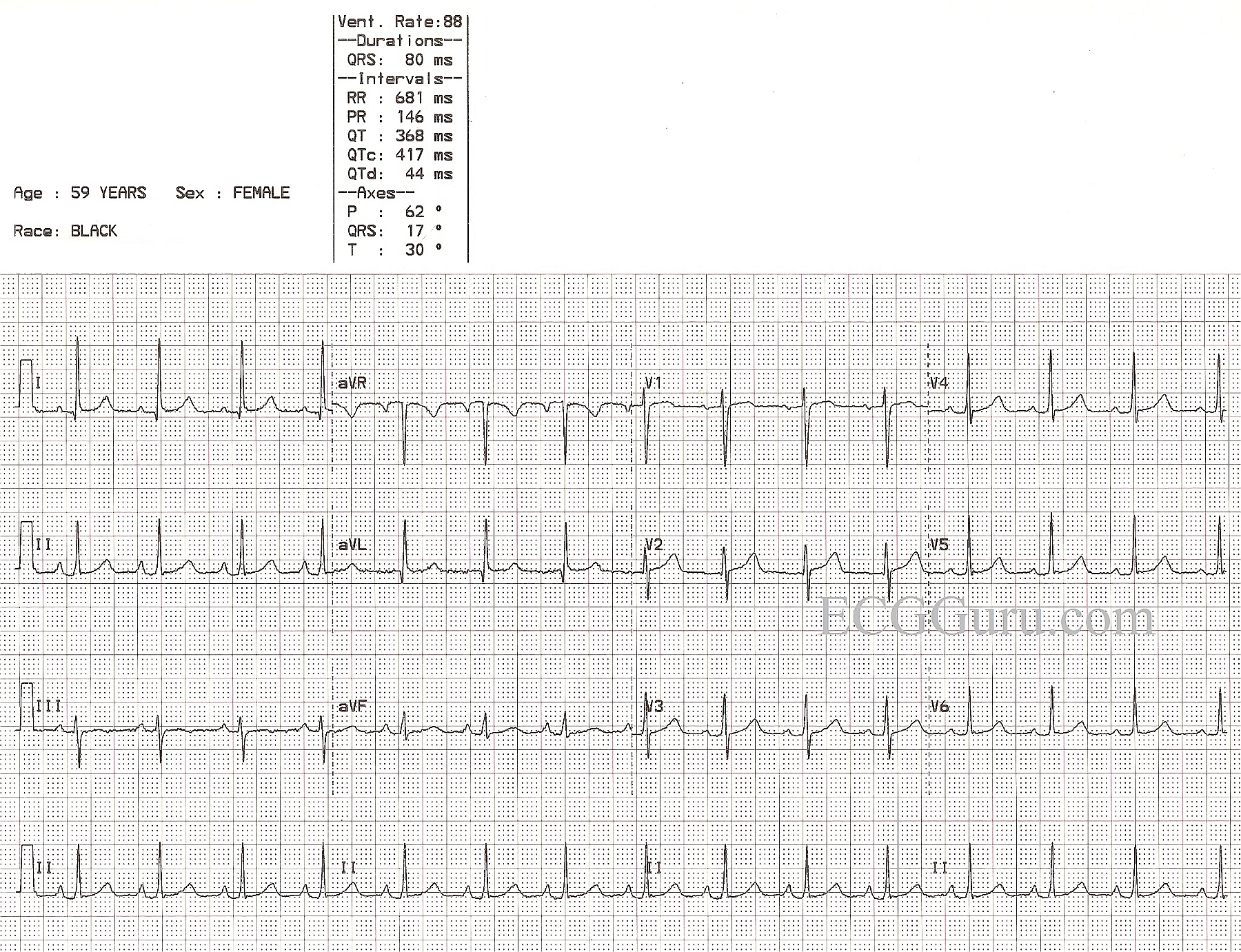 This ECG is nearly completely normal.  We say "nearly" because there are VERY subtle changes which may or may not be chronic.  Unfortunately, we know nothing about this patient's history or circumstances except age, gender, and race, and the fact that she was an Emergency Department patient.  If she presented with chest pain, the ECG might be viewed completely differently than if she presented with a fever.

So, first, let's look at what is within NORMAL range.  Most of these characteristics will be readily seen by your BASIC LEVEL students.  The rate and intervals are within normal ranges.  The rhythm is normal sinus rhythm.  There is good R wave progression in the precordial leads.  That is, V1 is primarily negatively-deflected and V6 is positive, with Leads V2 through V5 gradually becoming more and more positive.  The frontal plane axis is within normal range - Leads I and II are positive.  This would be a suitable ECG to use when introducing beginning students to the 12-lead ECG.

As for what is NOT NORMAL, there are several subtle characteristics.  First, the P waves are slightly tall and have a pointed appearance.  The P wave in V1 is biphasic.  This can represent P PULMONALE, a sign of right atrial strain.  This is often seen with pulmonary disease.  One might also expect to see a shift of the frontal plane axis to the right if there is right ventricular hypertrophy as a result of increased strain on the right heart, but here we see a subtle shift to the left.  The axis is still within normal limits, but at 17 degrees, it is closer to the left than the right.

The ST segments here are not perfect.  One could argue that there is VERY slight elevation in Leads I and aVL, and the shape of the ST in V1 is coved upward.   Lead III's ST segment is flat, and the T wave is inverted.  Without clinical corelation, it is impossible to determine the importance of these changes.  It is a good discussion to have with your more advanced students.

As said, it would be MUCH easier to ascribe meaning to these changes if we knew something of the patient's chief complaint, symptoms, and history.