Jerry W. Jones, MD FACEP FAAEM is a diplomate of the American Board of Emergency Medicine who has practiced internal medicine and emergency medicine for 35 years.

Question:   What is the cause of an apparent right bundle branch block pattern in a paced rhythm?

Answer:  Is There a Pacemaker Wire Problem… or Not?

During one of my orientations as a young internal medicine house officer, the cardiologist lectured to us on the essentials of how to check pacemakers. Since none of us had any ECG interpretation background our comprehension was less than sterling. But I remember him stressing the point that a properly paced pacemaker lead would result in a left bundle branch block pattern on the ECG. A right bundle branch block pattern in V1, on the other hand, meant that the pacemaker wire had inadvertently wandered into the left ventricle – a highly undesirable situation.

“Not to worry,” he said. “Such things rarely happen and you will probably retire before seeing such a thing!” That evening I saw my first pacemaker 12-lead ECG with a right bundle branch block pattern in V1. Fate wasted no time with me.

I ordered a 3-view chest x-ray and as far as I could see, the wire looked like it was in the right ventricle where it was supposed to be. I called the cardiologist on-call who happened to be in the hospital at the time and he dropped by the ward. Back then, we didn’t have ultrasound or echo available. But he, too, was convinced the pacemaker wire was in the right ventricle. It really was and so I still hadn’t seen a RBBB pattern due to a pacer wire in the left ventricle. I still haven’t, but I have seen a number of pacemaker ECGs with a RBBB pattern in V1.

How do we know if such a finding represents a real left ventricular pacer wire or a pseudo-malplacement?

Second, the axis of the pseudo-malplacement tends to demonstrate a significant left axis deviation, between -30 ° and    -90 °. Since the right ventricle is activated first, the vector finishes by pointing up and to the left. If the wire were actually located in the left ventricle, the mean frontal axis would be to the right of +90 °

A fourth check is to look for an S wave in Lead I. Remember: one of the most characteristic features of RBBB is that slurred S wave in Lead I (as well as the other left-sided leads). If the ECG shows an RBBB pattern in V1 and an S wave is present in Lead I, then that is most likely a real RBBB pattern and the wire has somehow made its way into the left ventricle. 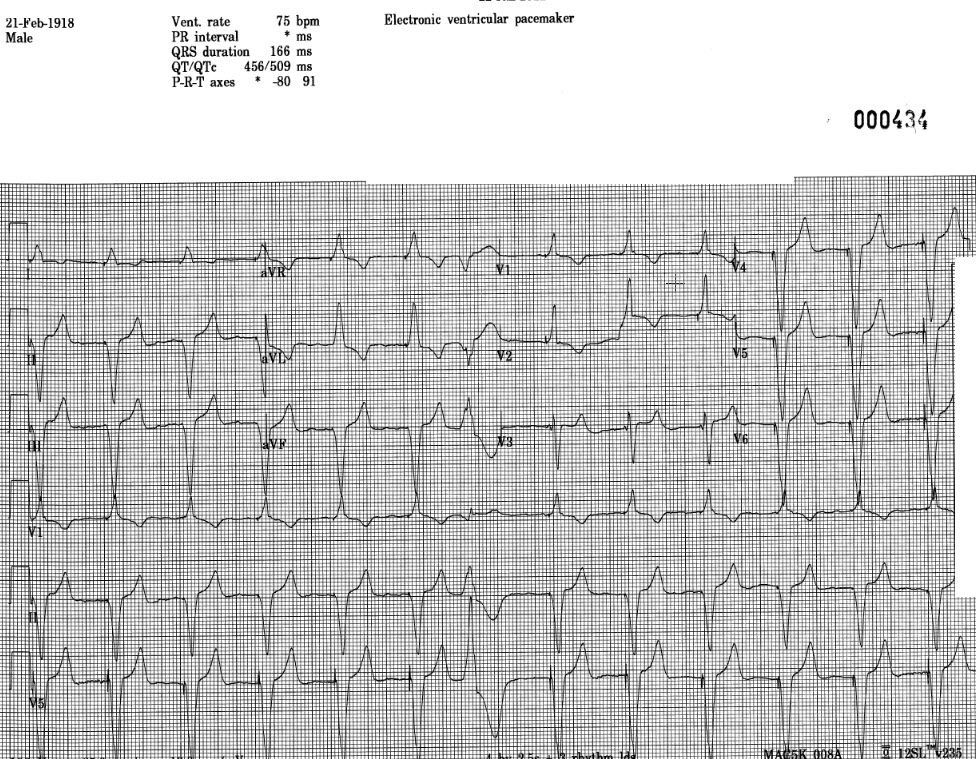