The Patient:    A 64-year-old man complaining of chest pain and shortness of breath for 20 minutes.  Long-standing history of triple vessel disease, severe aortic stenosis, hypertension, thrombocytopenia.  Meds unknown.  He was not considered to be a candidate for valve surgery.

The ECG: There is normal sinus rhythm with a rate of 90 bpm.  P waves are not visualized well in all leads, so remember that the three channels of this ECG are run simultaneously.  If you see a P wave in Leads I and II, they are also present in Lead III.  The PR interval is WNL.

The QRS complexes are wide, at .122 seconds (122 ms).  The criteria for left bundle branch block are met. (Supraventricular rhythm, wide QRS, upright QRS in Leads I and V6, negative QRS in V1).  The frontal plane axis is within normal limits, but toward the right, at 87 degrees.  The QRS complexes transition at V4 from negative to positive, but Leads V1 – V3 have no initial r waves.  These are possibly pathological Q waves, likely from a past anterior-septal M.I.

The patient:    79-year-old man complaining of severe “burning” chest pain, radiating to his neck. Walking exacerbates his discomfort.  He has had nausea and vomiting for 24 hours. Past medical Hx includes high cholesterol and atrial fibrillation. Medications not known.

The ECGs:  These ECGs could be called “classic”.  There is a 100% occlusion of the right coronary artery (RCA), which was successfully repaired in the cath lab.  About 80% of inferior wall M.I.s are due to occlusion of the right coronary artery.  Depending on how proximal the occlusion is, we can expect a pattern on the ECG representing injury to all areas supplied by the RCA.  This “package deal” can include: 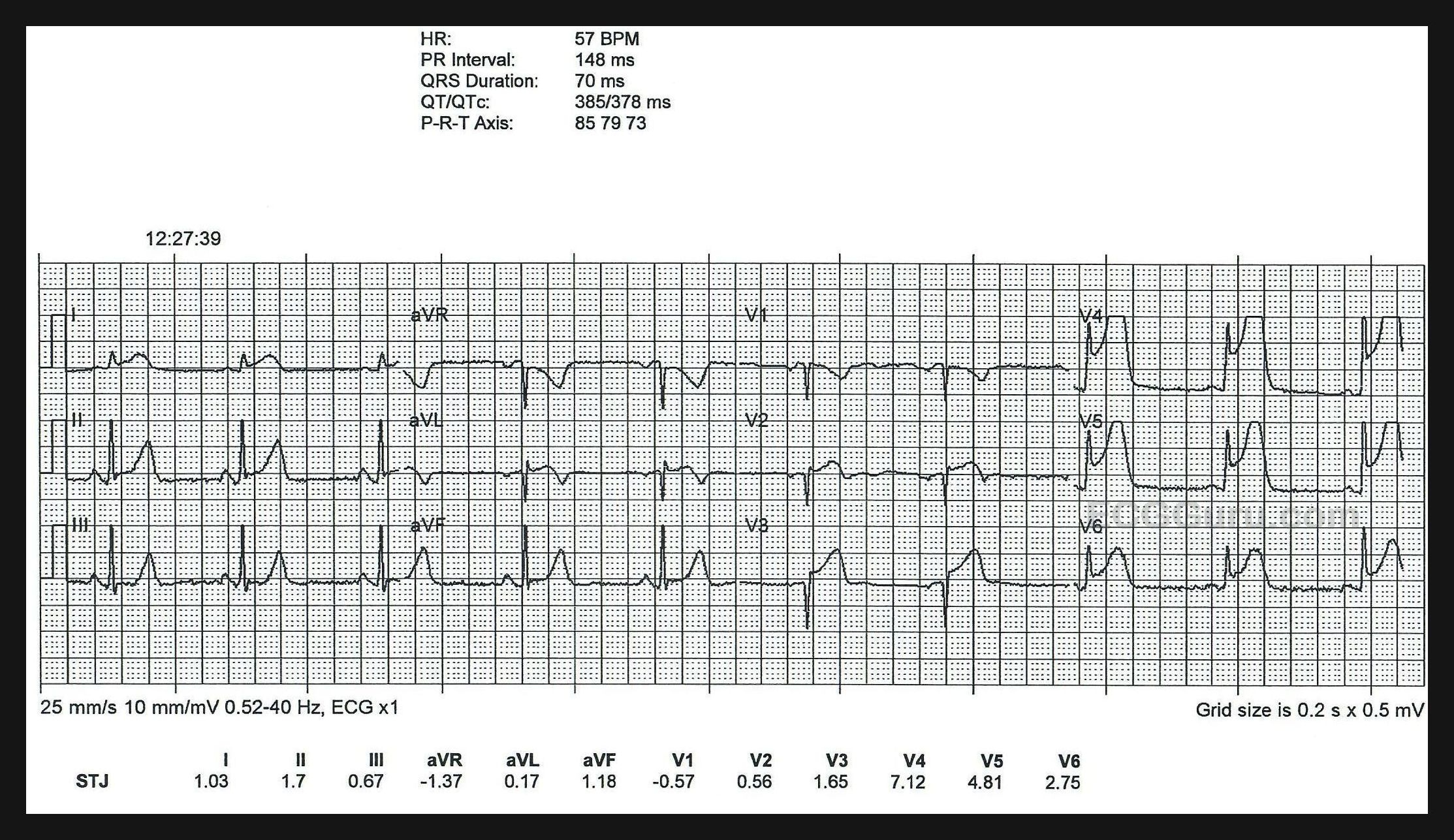 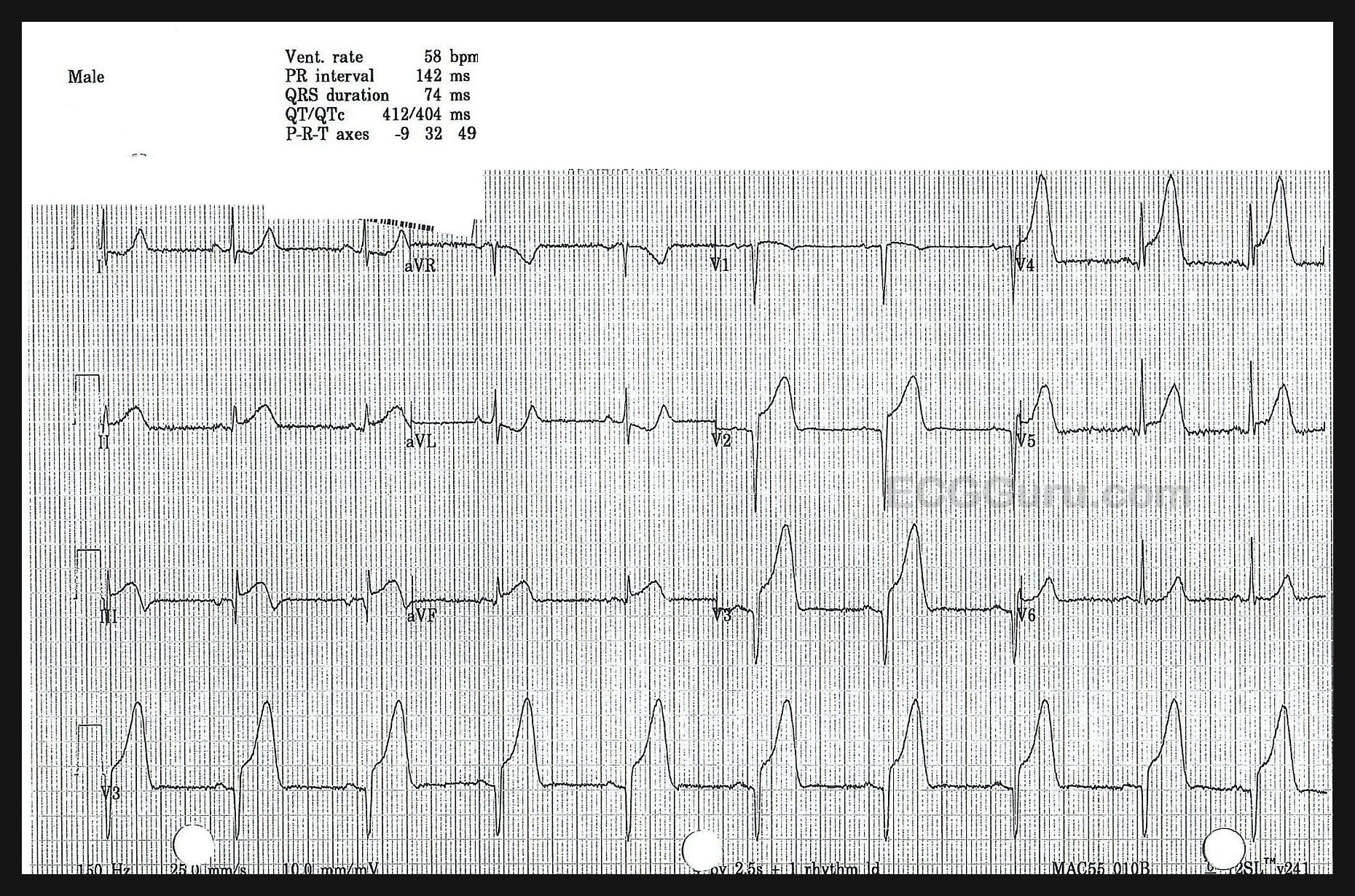 EDIT: Please refer to the comments below this text. The second ECG in this series shows unexpected QRS and ST-T morphology changes, which I tried to explain by way of the patient's long anterior descending coronary artery. However, Dave Richley, who is a very well-known cardiac physiologist and ECG Guru took the time to analyze these morphologies and realize they can be explained by an inadvertent ECG LEAD MISPLACEMENT. This patient does have a proximal lesion of the LAD, proven and repaired in the cath lab. But the inferior wall does not have the injury it appears to have in this second ECG. Thanks to Dave for reminding us to slow down and look closely when things don't look "right". 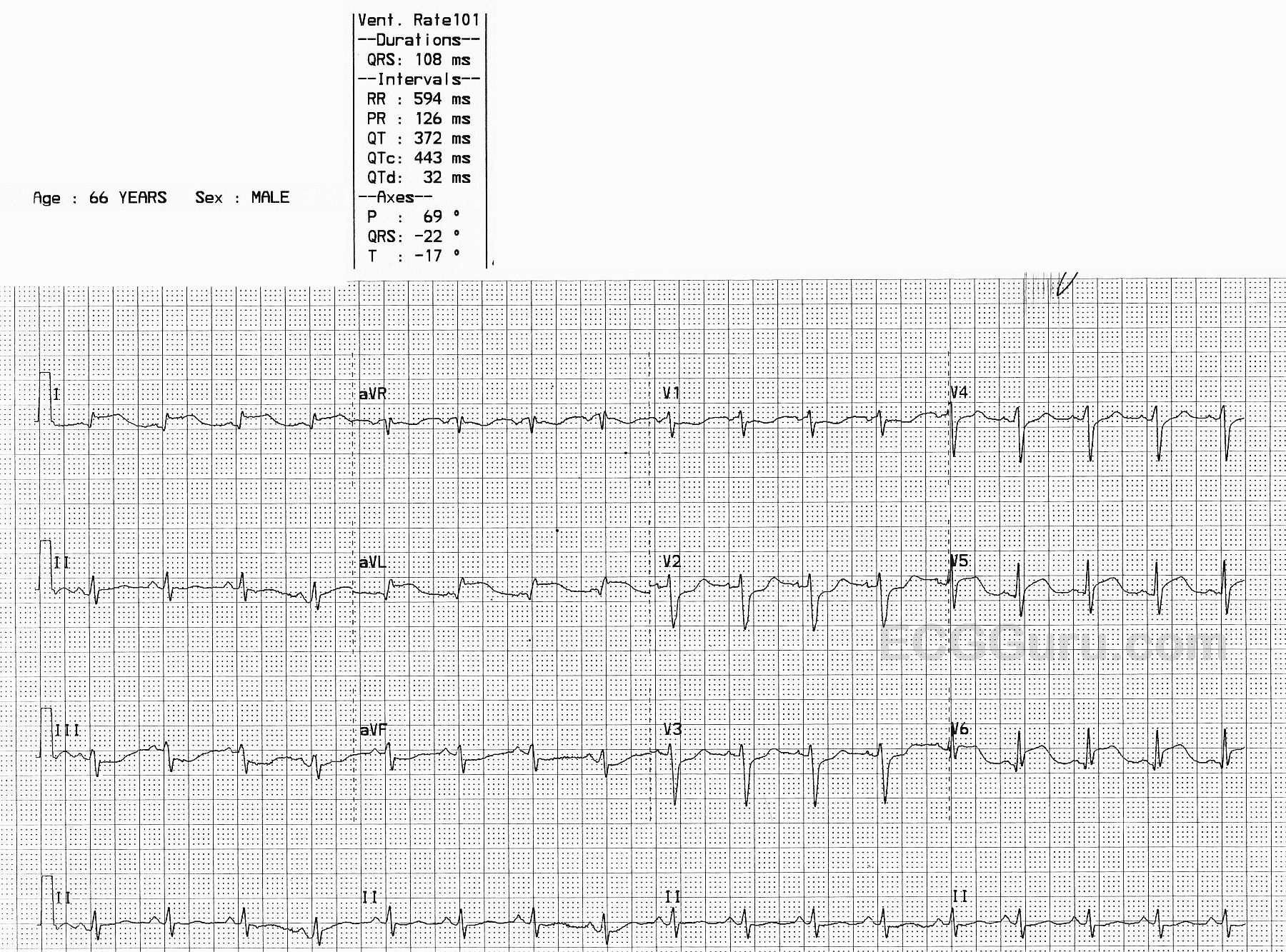 The patient:   This ECG was taken from a 66-year-old man who was complaining of chest pain at rest. He had been previously diagnosed with lung cancer with metastases to his bones.  The last ECG, taken one week ago, was normal.

The ECG:  There is mild sinus tachycardia at 101 bpm.  The rhythm is regular.  The QRS duration and PR interval are normal, as is the QTc.  The QRS voltage in the limb leads is small, and we do not know the patient’s height and weight.

There are notable ST elevations in I and aVL (high lateral wall) and in V5 and V6 (low lateral wall).  When the high and low lateral walls are similarly affected, we usually look to the circumflex artery as the culprit artery.  We also see ST depression in Leads III and aVF (reciprocal to the STE in I and aVL) and in V1 – V4.  This could indicate subendocardial damage or reciprocal changes.  This ECG meets the criteria for acute lateral myocardial infarction.

The patient was taken to the cath lab emergently.  His coronary arteries, including the left circumflex, all were free of occlusive lesions.  He had no coronary spasm during the procedure, but it was decided that spasm had been the cause of the ECG changes.  His ECG reverted to normal.

It is important to record abnormal findings, as some changes can be temporary or fleeting.  Coronary artery spasm can cause ischemia and damage to the heart, just as plaque lesions and blood clots can. 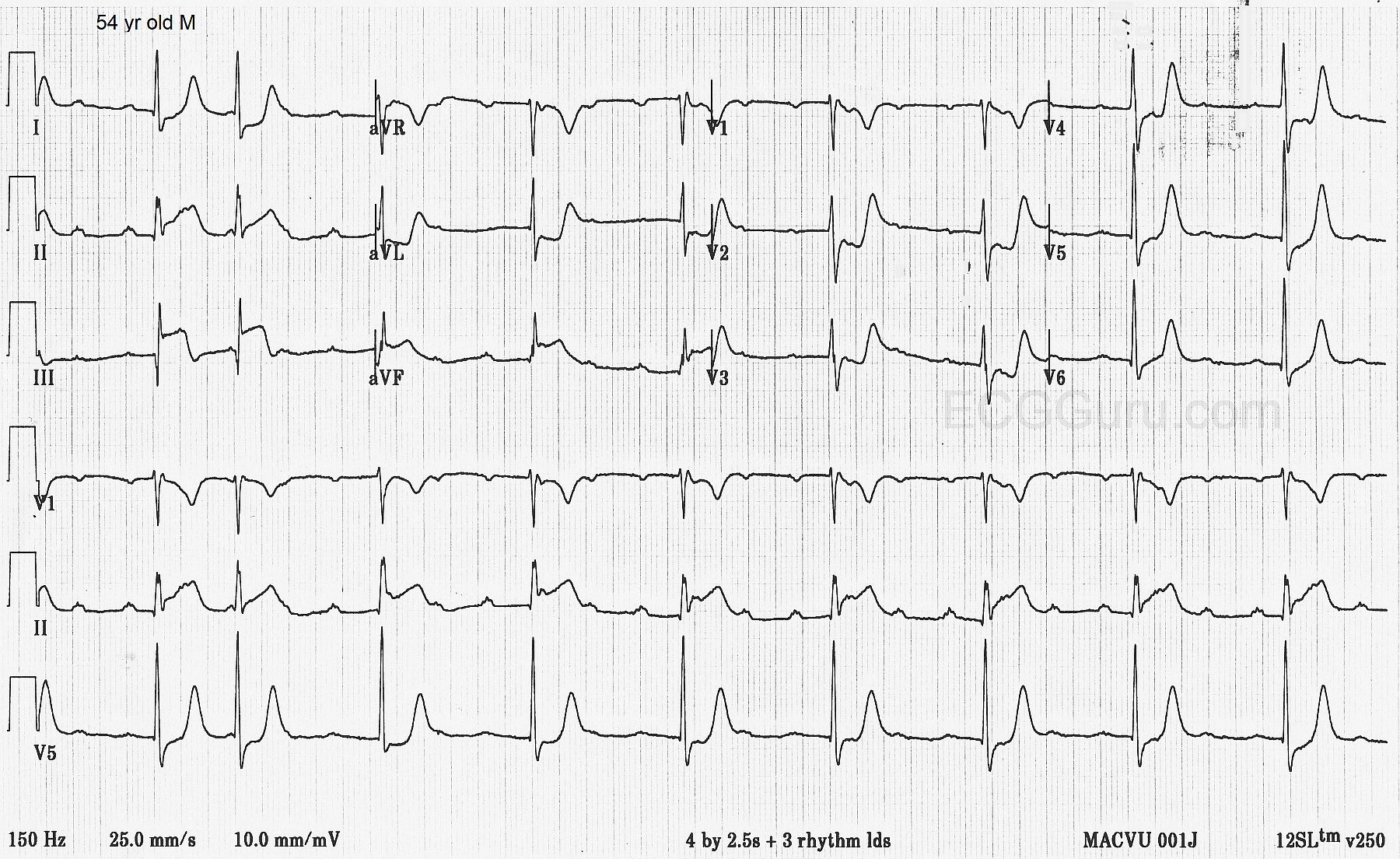 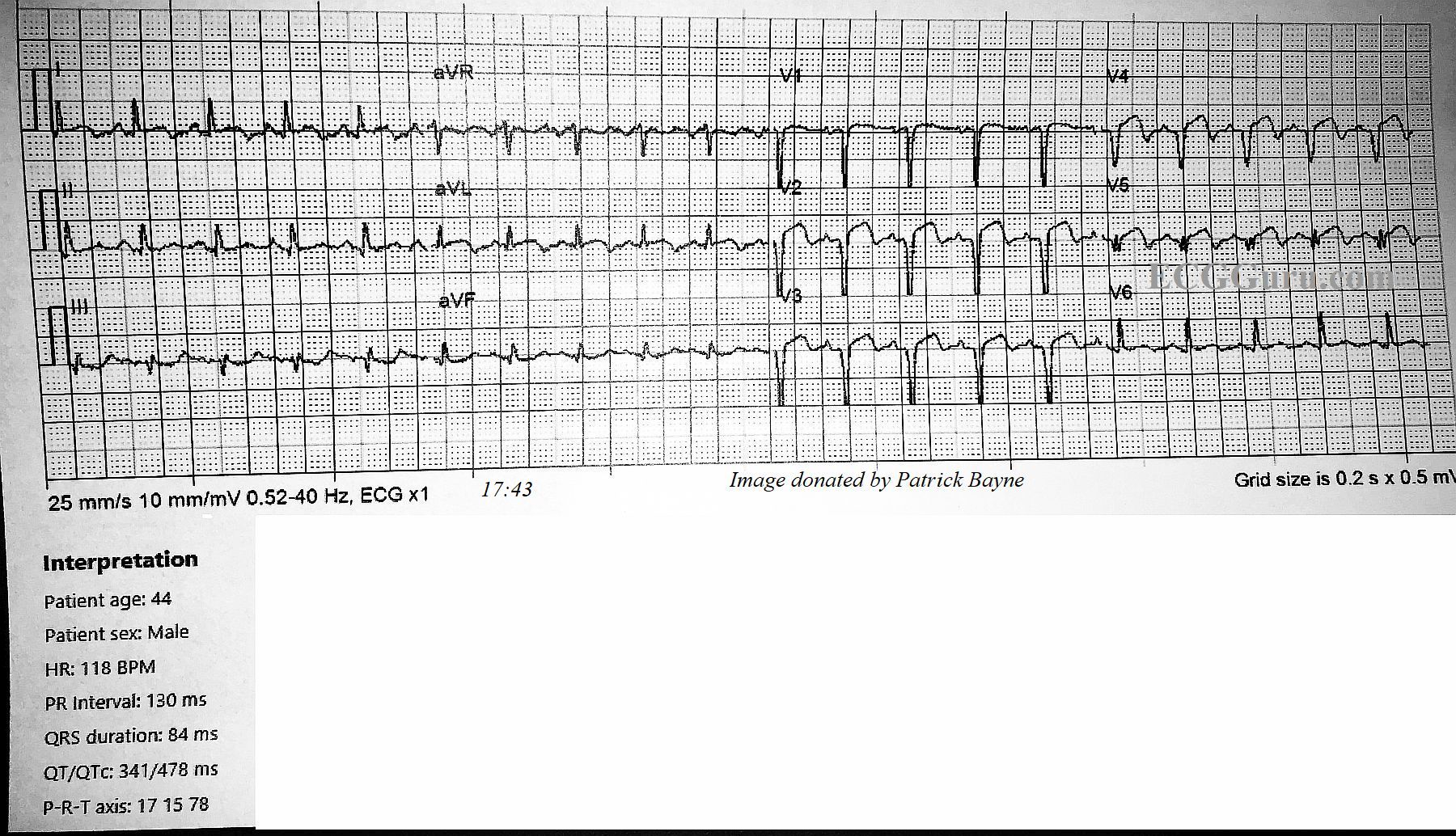 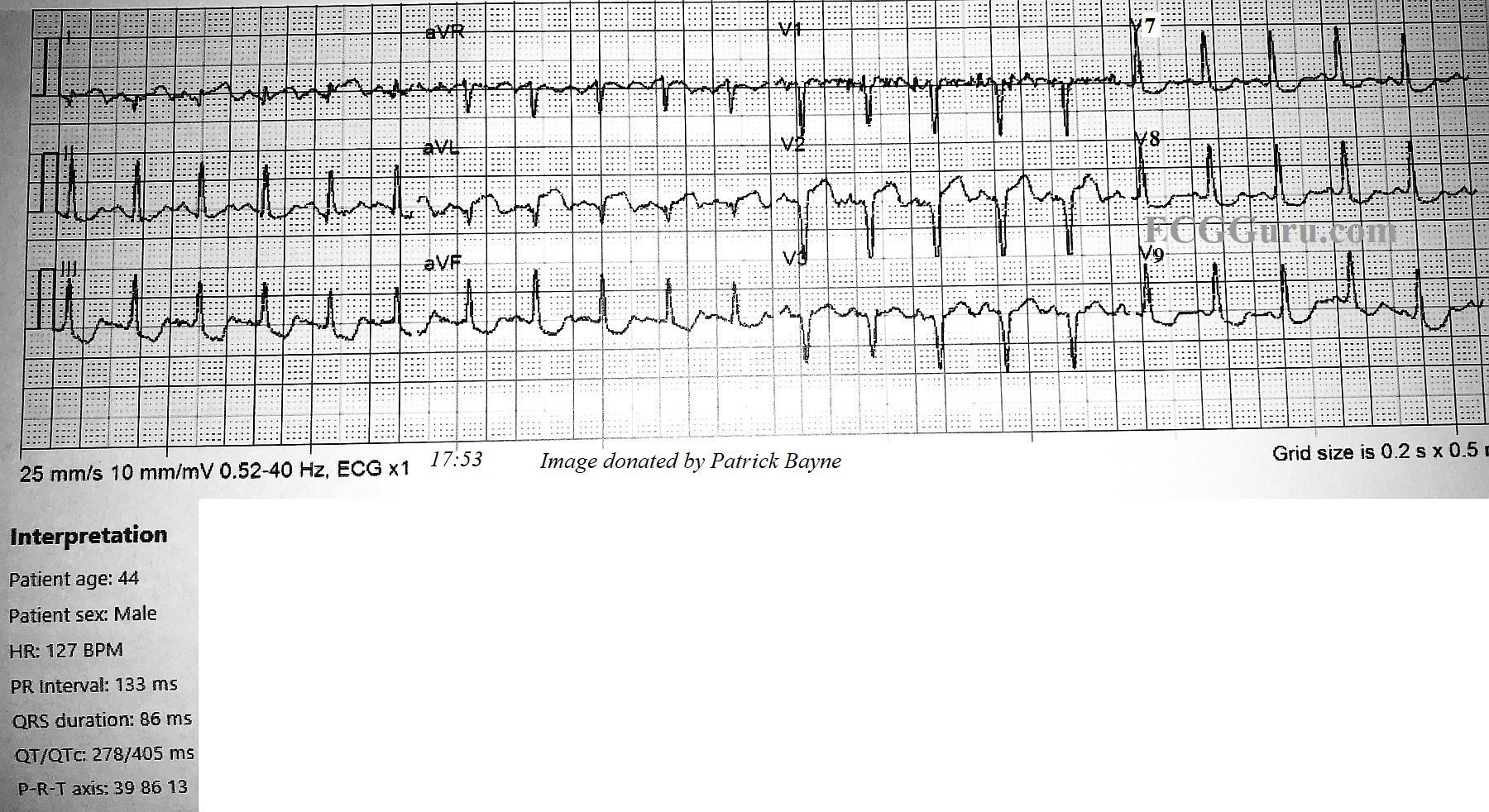 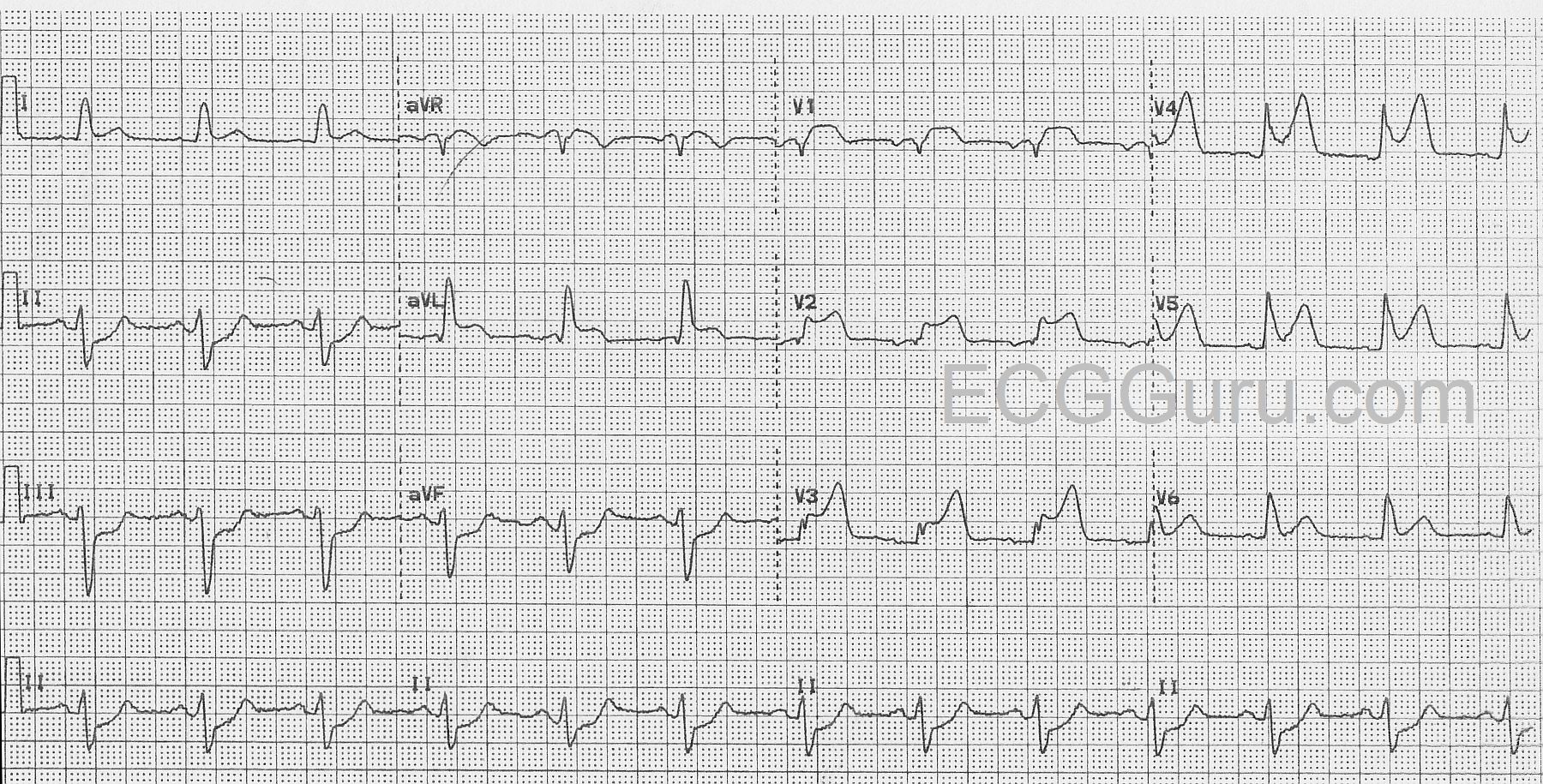 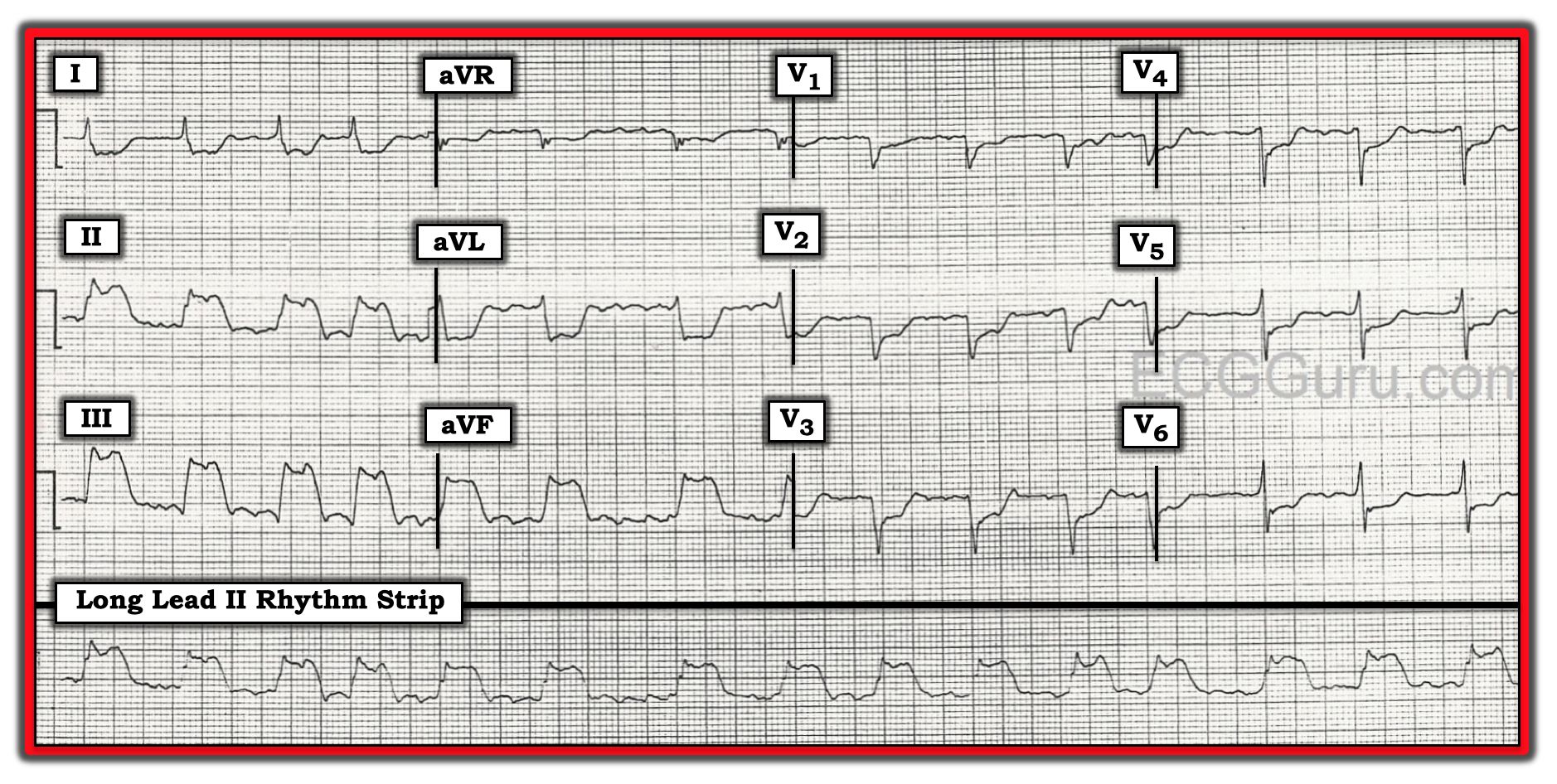 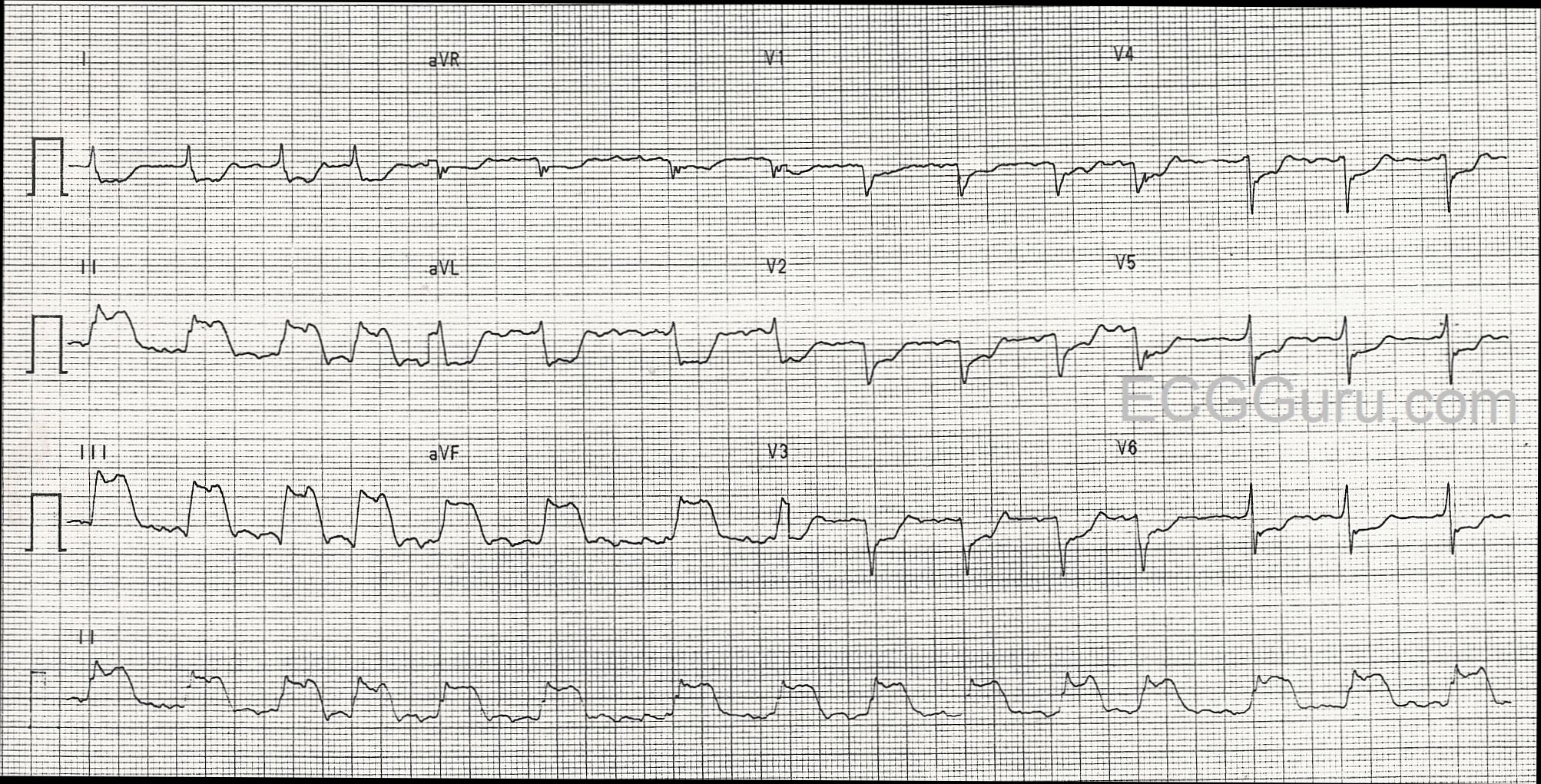 The Patient   This ECG was obtained from a 74-year-old man who had a history of COPD. He was complaining of severe chest pain at the time of the ECG.

The ECG     The rhythm is atrial fib or flutter (the R to R intervals are irregular, but seem to repeat about 4 interals).  Flutter waves are seen during some of the longer intervals. The rate is approximately 90 beats per minute.  The ST segments are very noticeably elevated in Leads II, III, and aVF.  There is reciprocal ST depression in Leads I and aVL, and also in all the precordial leads. 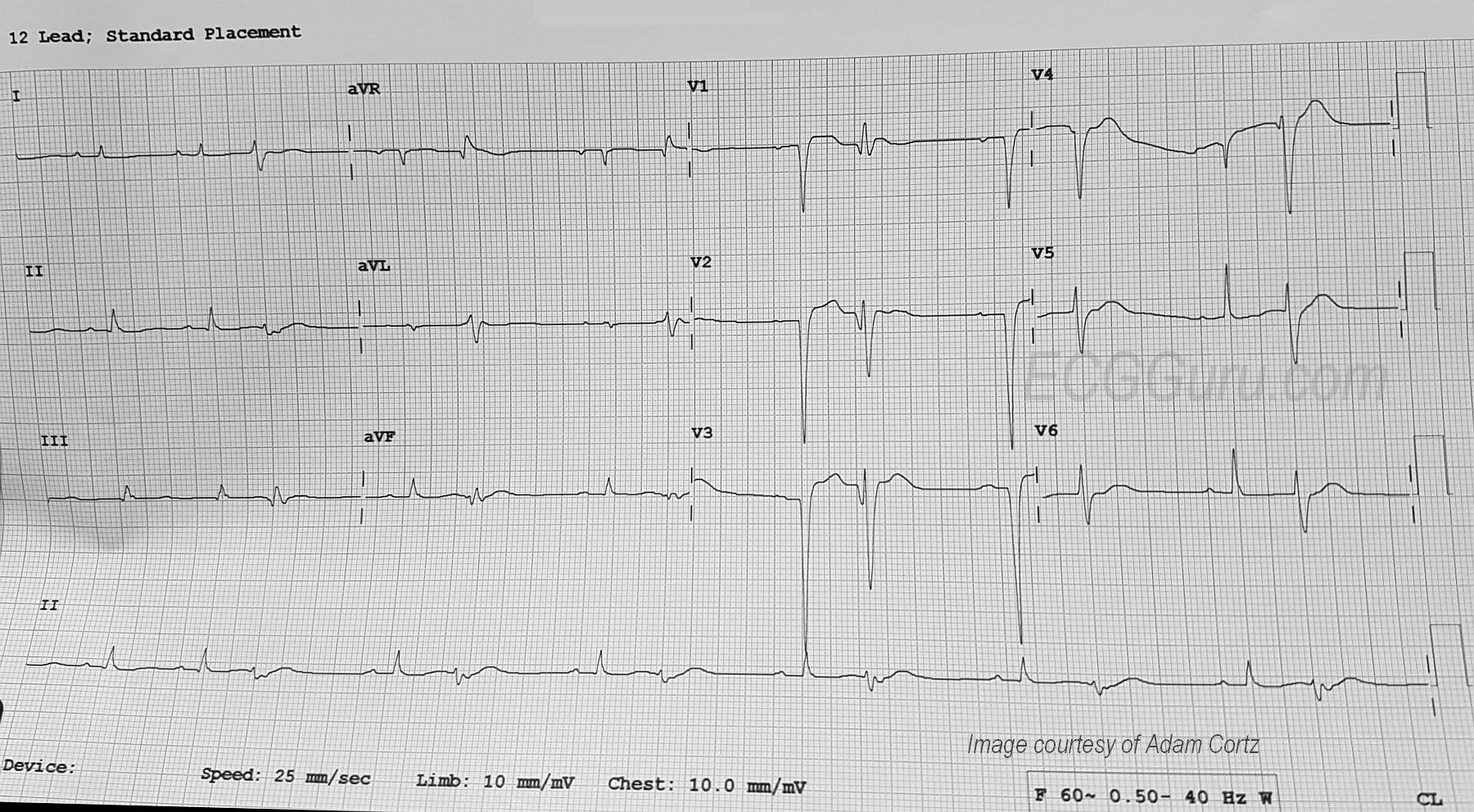 The Patient     This ECG was obtained from a 51-year-old man who presented to EMS with acute chest pain. He had a history of hypertension, 40 pack-year smoker.

Ten days post PCI, the patient had ventricular arrhythmias and went into cardiac arrest, but was resuscitated. He continued to have occurrences of non-sustained ventricular tachycardia (VT), progressing to sustained VT.  Electrolytes were monitored and corrected when necessary. The patient expired before any further diagnosis was made.

ECG Interpretation    The rhythm is sinus at a rate of about 80 bpm (first two beats).  The PR interval is about .18 seconds.  The QRS duration is about .10 seconds.  After the second sinus beat, ventricular bigeminy occurs. Every other sinus beat is obscured by the PVCs.  By the end of the strip, the underlying sinus rhythm has slowed slightly.

The ECG signs that the ectopic beats are ventricular are:  lack of P waves associated with the premature beats, QRS width about .16 seconds, and compensatory pauses.  The axis of the sinus beats is around 60 degrees (normal), but the axis of the premature beats is difficult to determine due to the low voltage and biphasic QRS complexes in the frontal plane leads.  It is also difficult to determine ST and T wave changes in the PVCs for the same reason.

The Patient:    Paramedics were summoned to the home of a 74-year-old woman who had a complaint of shortness of breath.  She was found sitting, alert and oriented, with labored respirations at 30/min. She stated that the shortness of breath came on suddenly. She denied any cardiac or pulmonary medical history, and said she took no medications. The patient was ambulatory.  Her skin was cool and moist.  Her SpO2 on room air was 85%, improving to 90% on oxygen via 15 lpm non-rebreather mask.  Her lungs sounded clear.

When the patient was moved to the transport vehicle, she suddenly became nonverbal, with a leftward gaze. Her pupils were noted to be unequal and non-reactive (we do not know which was larger).  Her BP was 67/43.

During transport, her heart rate declined into the 20’s and became apneic and pulseless.  Recorded BP was 46/25. CPR was done until and after arrival at the hospital, where efforts to resuscitate were halted after some time.