The Patient   This ECG was recorded from an 86-year-old man who was weak, pale, and diaphoretic. He was hypotensive, with a BP of 88/54.  He denied chest pain or shortness of breath.

The ECG   The 12-lead ECG shows a bradycardia at about 60 beats per minute and regular.  The QRS complexes are narrow, at a little less than .08 seconds (800 ms).  The P waves are negative in Leads II, III, and aVF and positive in aVR.  This is an indication that the P waves are traveling in a “retrograde” fashion – backward. The origin of the P waves has to be the AV junction or the lower atria for this to happen.  The PR interval is on the short side of normal at about .12 seconds (120 ms), possibly even less.  This is common in junctional rhythm, as the impulse starts at the AV junction, and travels back through the atria and forward through the ventricles at the same time.

There are no premature beats, and the ST segments are not elevated or depressed. There are no T wave inversions, except for aVR, where it is normal.

Patient Outcome    This patient was diagnosed with orthostatic hypotension, bronchitis, and urinary tract infection. He was treated in the hospital and cleared by a cardiologist for discharge two days later.

Our thanks to Michael Francis and Chris Burden for donating this ECG. 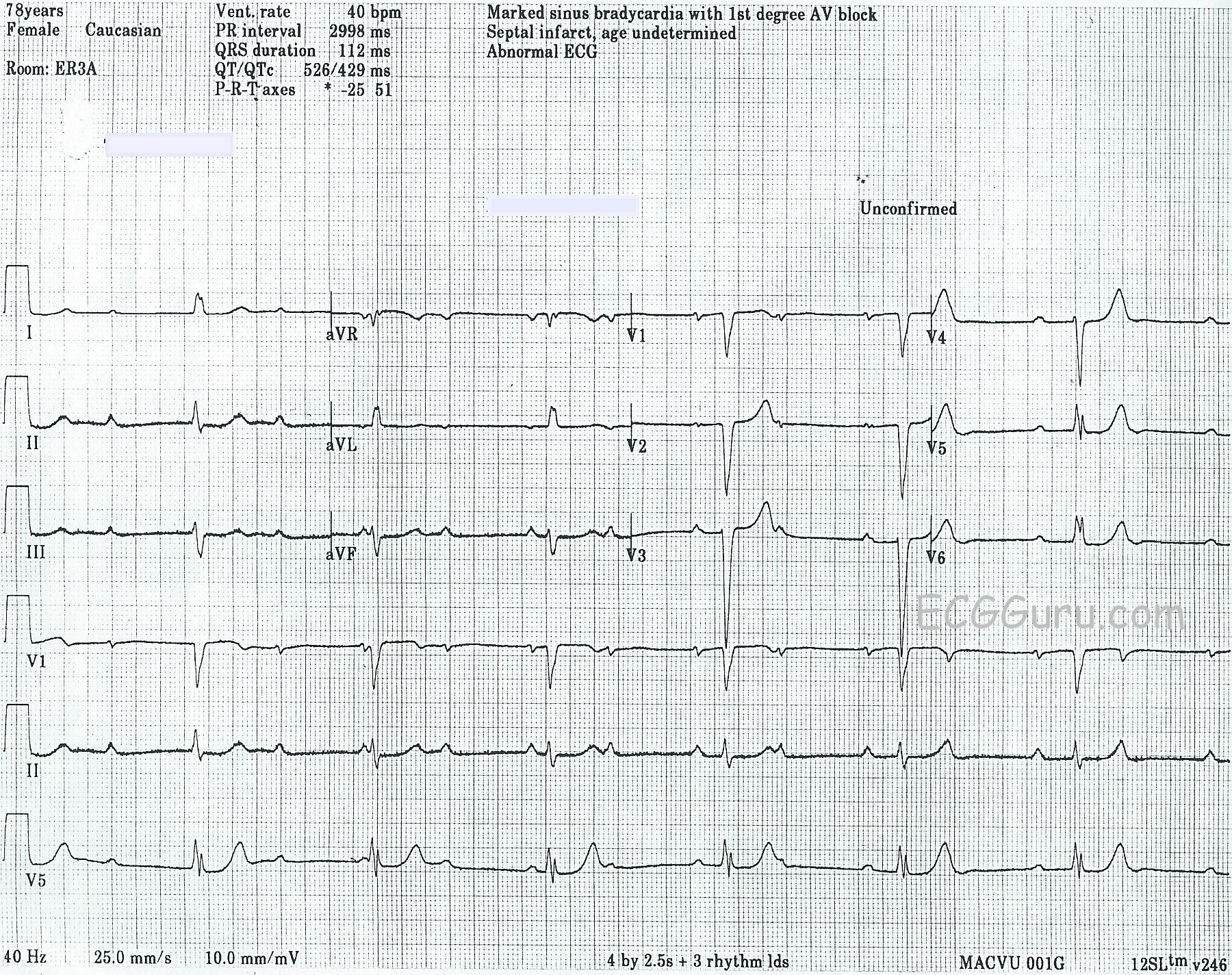 This ECG was taken from a 90-year-old woman.  We have no other history, unfortunately.  It is a good example of a sinus rhythm with complete AV block, also called third-degree AV block.

The defining characteristics of this rhythm include:   1) an underlying rhythm that is regular and with a physiological rate.  In other words, the P waves are not so fast that they would not be expected to conduct one-to-one.  2)  a second rhythm of regular QRS complexes that is unrelated to the P waves.

Occasionally, a P wave may occur before a QRS and appear to have a PR interval.  This is just a chance meeting, as both rhythms (P waves and QRS complexes) are regular AT DIFFERENT RATES, so we would expect them to occur near each other from time to time.  NONE of the P waves are being conducted to the ventricles to produce QRS complexes. This is a good ECG to demonstrate "marching out" the P waves to see that they are very regular, even though some are hidden in the QRS, ST segment, or T waves.

In very general terms, this "supra-Hisian" type of AV block is preferable to a "sub-Hisian" block.  The rate is faster, and the QRS complexes narrow, both conditions causing a better cardiac output than wide QRS complexes and extremely slow rates.  However, the effect of the block on the patient has a lot to do with the cause of the block and the symptoms the slow rate cause.  Emergency treatment of the rate may be necessary if it causes a drop in blood pressure and perfusion.  Some patients with this type of block will need a permanent implanted pacemaker, but not all.

This ECG is taken from a patient with an implanted pacemaker who was experiencing near-syncope.  She was taken to the hospital by EMS, where the pacemaker was adjusted to obtain ventricular capture.  This ECG did not have a Lead II rhythm strip, so the 12-lead ECG is being presented.  The P waves have been marked with a "P", pacemaker spikes marked with an arrow, and the QRS complexes marked with a "J" because they are junctional.  Because we can see 12 leads, or viewpoints, the morphology of the P waves and QRS complexes changes each time the machine switches to a new lead.

The underlying rhythm is sinus, with nearly regular P waves occuring at a rate of about 72 beats per minute.  The QRS complexes are also regular, but they are dissociated from the P waves.  Because the rate is near or just under 40 bpm, and the QRS complexes are narrow, this represents a slow junctional rhythm.  Because both atrial and ventricular rhythms are regular, but not associated with each other, an interpretation of complete heart block (third-degree AV block) can be made.  This explains why the patient had a pacemaker implanted.

The pacer spikes, for the most part, track the P waves, which is how this pacemaker is programmed.  They are not followed by a paced QRS complex, however.  This is failure to capture.  The second and fourth P waves did not stimulate a pacer spike because of their proximity to the T wave of the junctional beat.  The mA (energy setting) was adjusted in the Emergency Dept., and the pacemaker did not require repositioning.  The patient regained a reliable paced rhythm.

This section of the ECG Guru is meant to be for your basic students.  Pacemakers now have become very complex, with many options and variable settings.  So complex, that I would not feel comfortable getting into any more detail than I have here (although visitors to the site are welcome to).  It is important that, if you deal with patients in an emergency setting, you do not tell the patient that "something is wrong with their pacemaker" until it has been evaluated by a qualified person who can electronically interrogate the device.  It can be very difficult to determine from an ECG how a pacemaker is programmed, and how it should be reacting.  Since this patient had symptoms related to the bradycardia, and since pacemaker spikes occurred free of any refractory period and did not produce QRS complexes, it is safe to say there needs to be an adjustment.

In an emergency, with serious symptoms present, a transcutaneous or transvenous temporary pacemaker can be used.  Medications such as Atropine, epinephrine, and norepinephrine are also used, depending upon the type of AV block and the resources available. 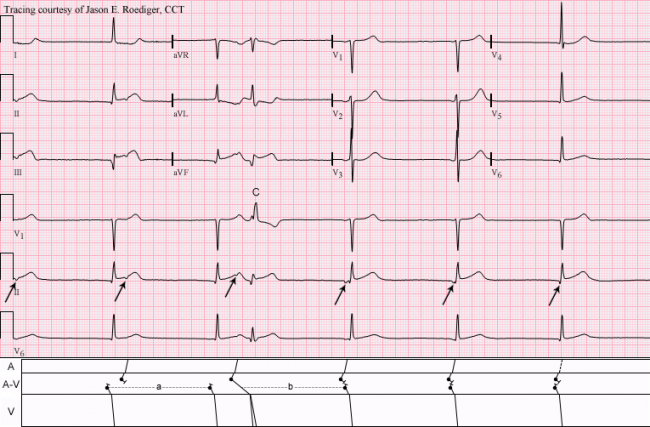 At this time of posting, I currently have no clinical data for this patient.  This ECG is of interest because of its arrhythmic and nonarrhythmic elements.

I can think of at least two possible explanations for the mechanism of this rhythm and both would benefit from being illustrated by a laddergram.

One mechanism is rather exotic and has not been previously seen here on this website or discussed in the various FB forums. 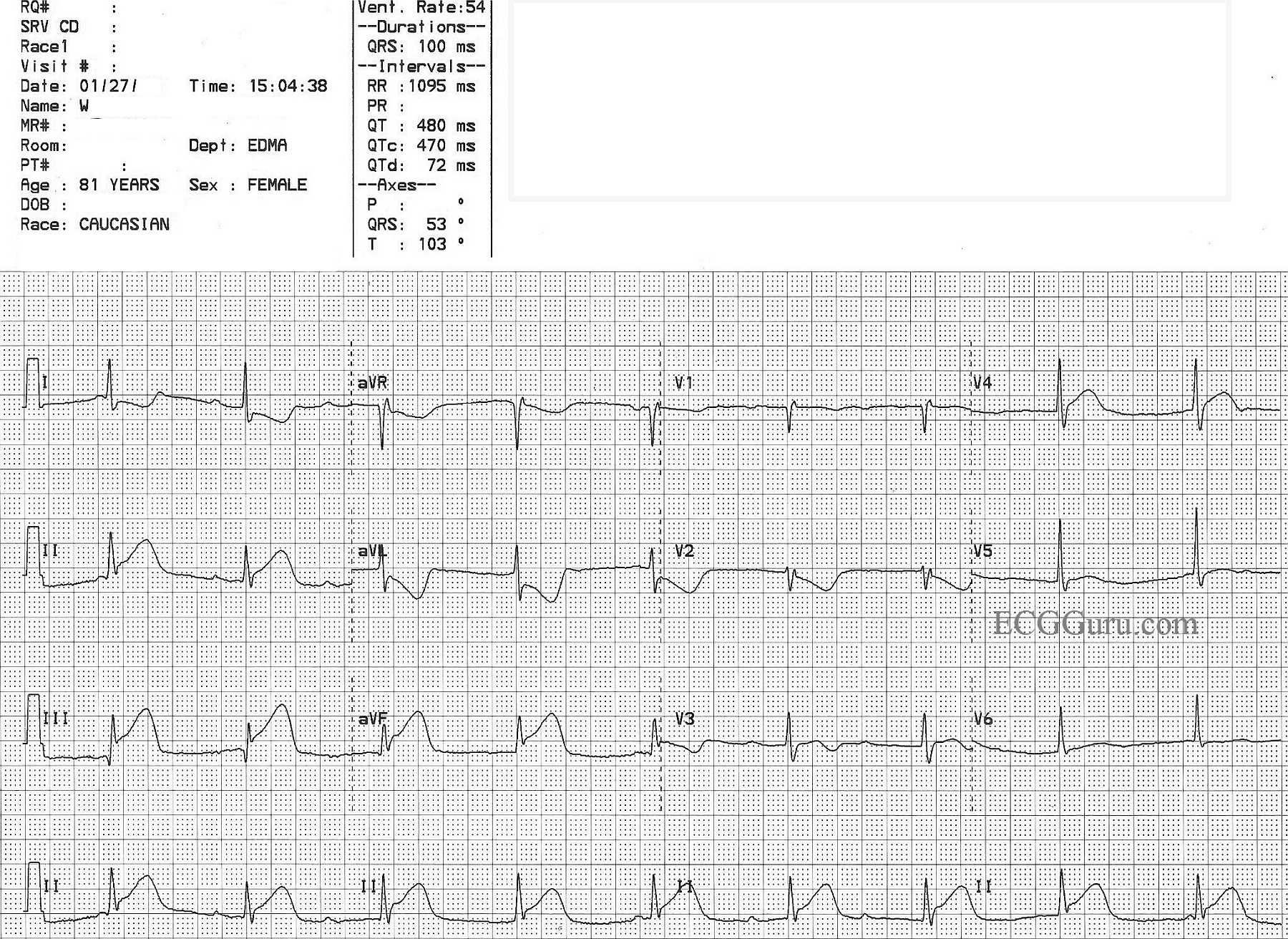 This ECG was obtained from an elderly woman who suffered a complete right coronary artery occlusion and inferior wall M.I.  In her case, the AV node was also affected, and she developed a third-degree AV block with a junctional escape rhythm.  A good ECG for ACLS classes as well as for ECG classes.  A lively discussion can be had regarding "types" of complete heart block and the nature of the escape rhythm - when to treat and when to leave the rhythm alone.  In this case the rate of the junctional escape rhythm was adequate for perfusion, and the patient's blood pressure was stable. Priority for treatment in this situation is restore blood flow through the coronary artery, if the patient is a candidate for PCI.  You might want to review Christopher Watford's contribution to the Ask the Expert page on AVB vs. AV Dissociation. 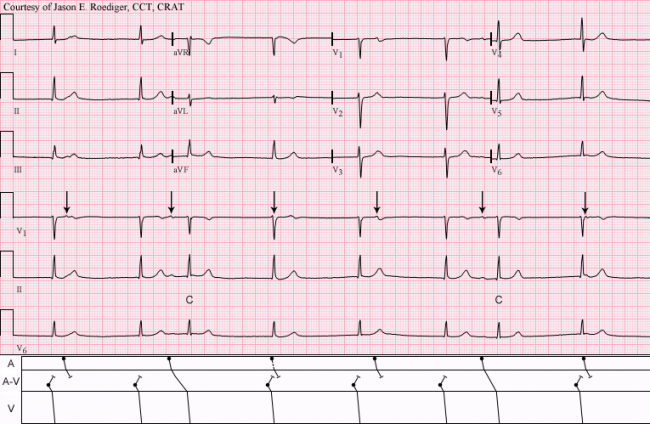 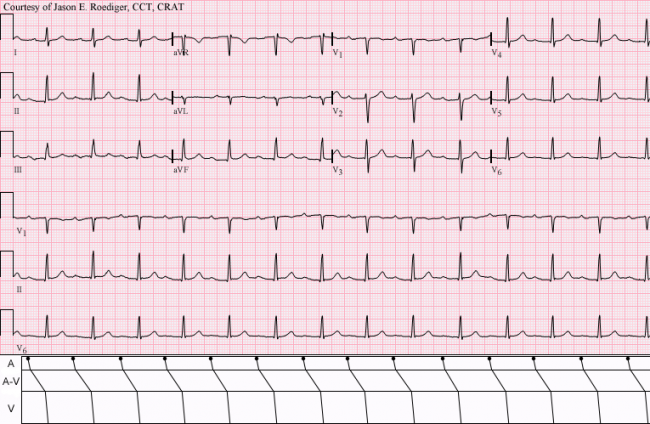 This patient was seen by his primary care provider (PCP) on an outpatient basis.  The PCP decided to send her patient over to me to perform a routine ECG and establish a baseline, hince the computer's statement below of "No previous ECGs available".  I printed out the above 12-lead ECG and became slightly concerned with the rhythm I was seeing.  Consequently, I also recorded six full pages of continuous rhythm (not shown here).  I don’t ordinarily resort to doing this