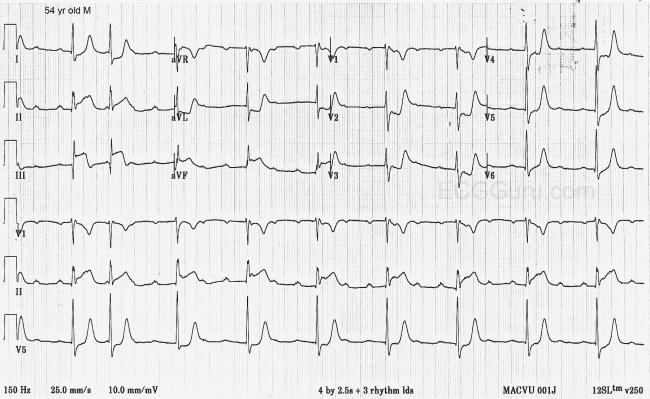 This series of two ECGs was taken from a 71-year-old man who complained of dizziness and near-syncope the day before these ECGs were done.  He was seen in an Emergency Dept., and advised to follow up with a neurologist. On the day of these ECGs, still feeling dizzy and like he would pass out, he called EMS again.  He denied chest pain.  We do not know his past medical history.  The first ECG was taken at 10:22 am.  His BP was 177/76 and SpO2 99%.  It shows a regular sinus rhythm (p waves marked by small asterisks) at a rate of about 75 / min.  There is a high-grade AV block, meaning that some P waves are conducted (beats 2, 4, 7), but most are not.  In addition, he has an escape rhythm, probably ventricular, at a rate of just over 40 / min.  The overall effect of the escape rhythm is to keep the heart rate above 40 beats per minute.

Fifteen minutes later, at 10:37 am, another ECG is taken.  The patient's BP is 154/86.   This ECG shows the high-grade AV block quite well, but this time, most of the QRS complexes on the strip are conducted from P waves.  It is difficult to see all the P waves in every lead, but if you remember that all three channels are run simultaneously, you will find evidence of the P waves in at least one of the three leads represented at any given time.  (Example:  V1, V2, and V3 - V3 shows the P waves well).  The next-to-last QRS on the page is interesting, as it has a different PRI than the normally conducting beats.  Is this a fusion beat or an aberrantly-conducted one?   It probably does not matter to the outcome of the patient.

The slowing of the rate in the second strip gives us a clue as to why the patient felt dizzy, but the blood pressures recorded did not catch hypotension.  Possibly if the patient had been standing instead of lying on a stretcher, we would have seen more hemodynamic changes.

Unfortunately, we do not know the outcome of this patient, but it seems he is a candidate for an implanted pacemaker. 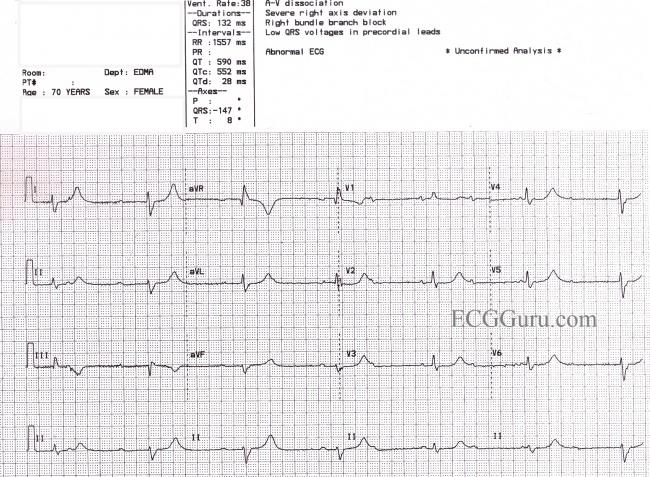 This ECG is from a 70 year old woman for which we have, unfortunately, no clinical information.  It shows a sinus rhythm with a rate of about 72 bpm (NSR) with AV dissociation caused by third-degree heart block.  The escape rhythm is junctional at a rate of 38 bpm.  There appears to be a right bundle branch block, based on the QRS duration of 132 ms, and a wide S wave in Leads I and V6.  The precordial leads do not show the usual RBBB pattern of rSR' in V1 and V2, and the r wave progression is poor (non-existent).  This is felt to be due to poor lead placement (a good teaching point).  Of interest, the ECG machine has reported a "severe right axis deviation" based on the tall upright R wave in aVR and the deep S in avF.  In RBBB, the first part of the QRS represents left ventricular depolarization, and the terminal wave represents the delayed right ventricle.  In effect, the two ventricles have their own electrical axes, which we can see because the ventricles are not depolarizing simultaneously.  The axis of the LV appears to be normal in this tracing.

In addition to the above, this patient has a very prolonged QT interval.  The QT is longer in bradycardic rhythms, but when corrected to a standard of 60 bpm (QTc), this patient's QT interval is still prolonged at QTc: 552 ms.  Without clinical data, we cannot speculate  as to why this patient's QTc is prolonged, but it can be a very dangerous situation.  Follow the links for more information on QT prolongation and Torsades de Pointes and Long QT Syndrome.

As always, we welcome comments from our members adding insight to this interesting ECG, and also questions you would like to ask our Guru members.