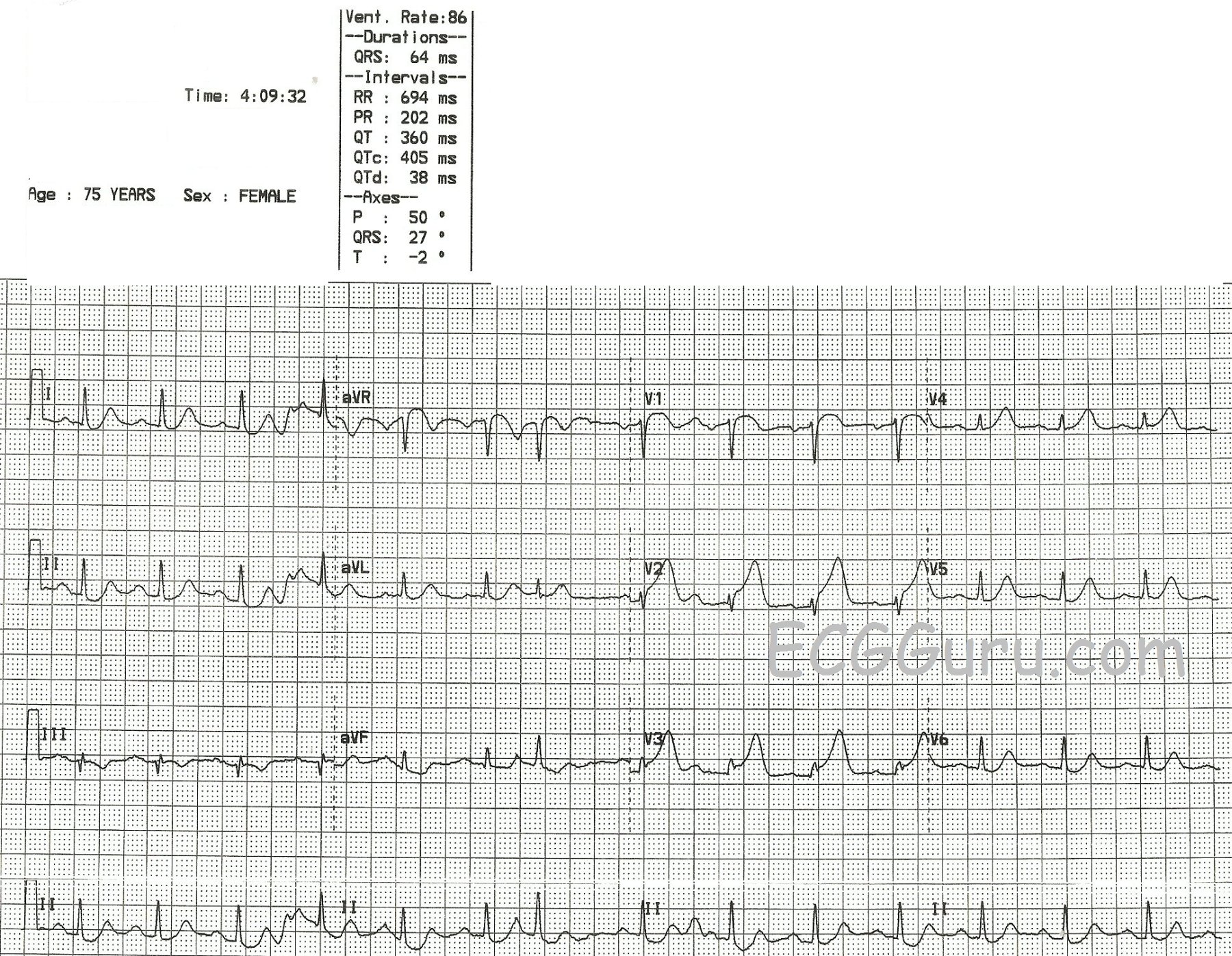 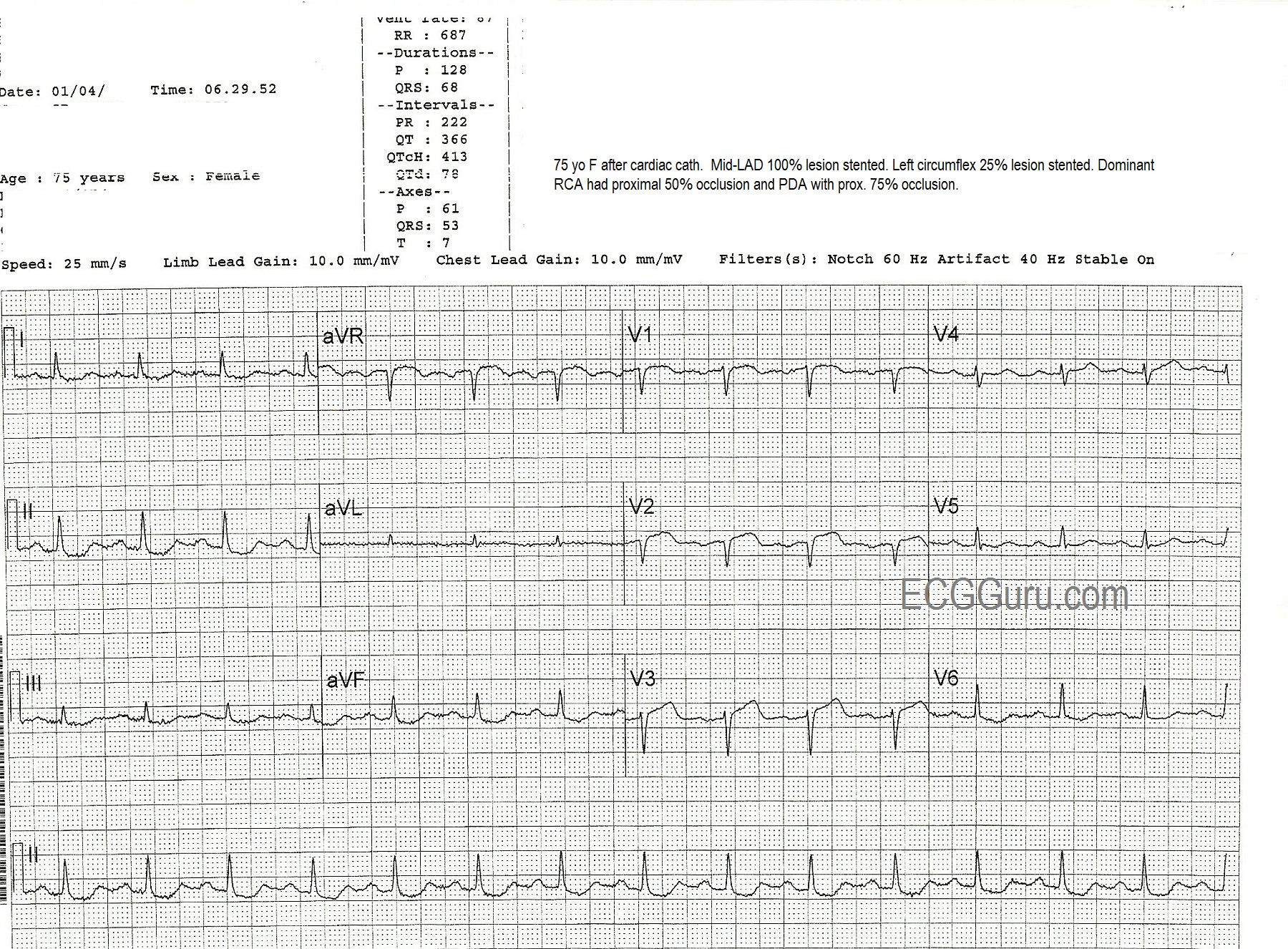 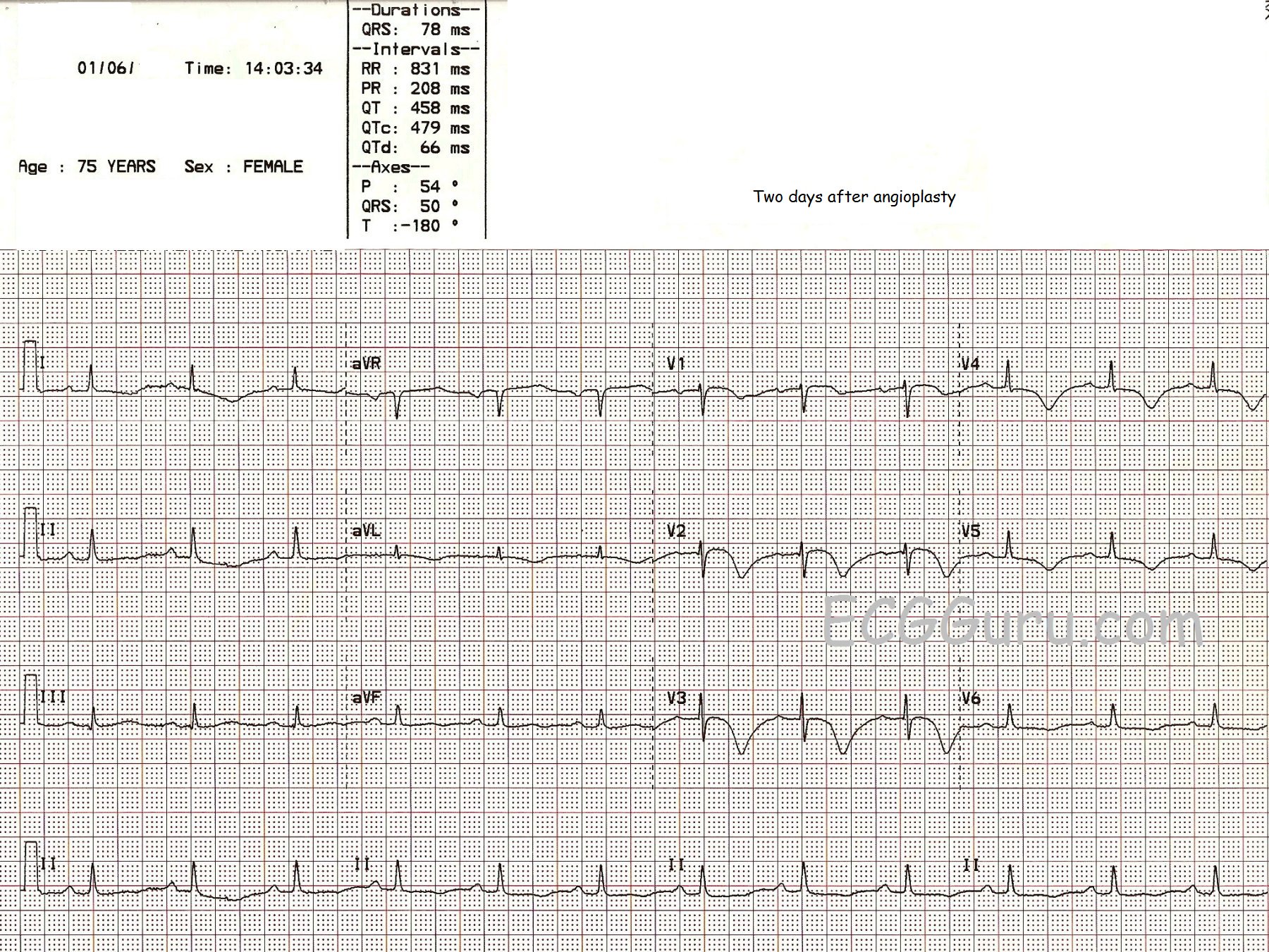 A series of ECGs can be a valuable addition to any teacher's collection.  This series follows a 75-year-old woman through three days, during which she experienced an acute anterior wall M.I., a catheterization with angioplasty and stents placement.

In the first ECG, taken at 4:09 am, the patient has presented to the Emergency Dept. with a complaint of chest pain. (Other details are no longer available).  Although there is some baseline artifact, it appears that the rhythm is sinus rhythm with one PAC (7th beat).  There is subtle but measurable ST elevation in V1, V2, and V3 (anterior-septal leads).  The shape of the STE in V1 is noticeably coved upward.  Even aVR has some STE, with coving.  There is equally subtle ST depression in Leads II, III, and aVF (inferior leads).  Fortunately, there are no pathological Q waves at this point, which would be an indication of necrotic tissue in the area of the M.I. (anterior-septal wall).

The patient was taken to the cath lab, where it was found that she had a 100% mid-left anterior descending artery occlusion, which was opened and stented.  She also was found to have widespread coronary artery disease, with the left circumflex artery 25% occluded (stented), the right coronary artery (which was dominant) proximately occluded 50% and stented, and the posterior descending artery 75% occluded (stented).

The second ECG, taken at 6:29 the same morning, after the cath procedure, shows some ST elevation with coving remaining in V1 through V3, and also aVR, but now with the loss of R waves in V1 and V2 and loss of R wave voltage in V3.  This represents the formation of pathological Q waves, and can be a permanent change in many cases.

The third ECG, taken two days later in the cardiac step-down unit, shows improvement, and progression toward healing.  The ST segments are still shaped in a slightly coved-upward shape, but they are less elevated.  The R waves have returned.  The T waves in V1-V3 are inverted.  The deeply inverted T waves of V2 and V3, especially, and classic for ischemia, and we even see the "ischemic zone" extending across the anterior-lateral wall, including V4 through V6 and Leads I and aVL.

The patient did very well to discharge, and we don't have followup after that.

This series of ECG rhythm strips shows a paroxysmal supraventricular tachycardia successfully treated with adenosine.  The patient was complaining of a rapid heart rate and palpitations, but was hemodynamically stable.  It is not known whether any parasympathetic stimulation, such as a Valsalva maneuver or carotid sinus massage, was used initially.

The first rhythm strip shows a PSVT, presumably AV nodal reentrant tachycardia, at a rate of about 215 per minute.  (We originally indicated a rate of 240 per minute, but this was a typo). Using the simplist method of determining rate, the six-second method, we see 21, but almost 22, QRS complexes in six seconds. Differential diagnosis would include sinus tachycardia, but this rate is too fast for sinus tach, especially in a resting patient.  Also, sinus tach would slow down as the patient is rested or made more comfortable, and this rate did not vary.  Also, when confronted with a supraventricular tachycardia, one should also consider atrial flutter and atrial fibrillation.  This is somewhat slow for atrial flutter with 1:1 conduction, and that rhythm is much more rare than AVNRT. It is too regular for atrial fibrillation.  So, we are left with the probable diagnosis of paroxysmal supraventricular tachycardia.  The “paroxysmal” part is presumed since AVNRT has an abrupt onset, and the patient’s symptoms started suddenly.

The second rhythm strip shows what happened after adenosine was administered.  The patient received first a 6 mg dose, rapid IV push.  When that was not effective, he received 12 mg rapid IV push.  The rhythm strip is typical of the first minute or so after adenosine administration.  Adenosine can cause transient AV blocks, escape rhythms, and ectopic irritability.  The half-life of adenosine is only 6 seconds, so the dysrhythmias and uncomfortable symptoms are short-lived.  In this strip, we see frequent PVCs and runs of V tach.

This series shows the evolution of ECG changes in anterior wall M.I. secondary to occlusion of the proximal left anterior descending artery.  The patient is an 88-year-old woman with chest pain.  She was designated a "cardiac alert" from the field by paramedics.  Her proximal LAD was opened and stented in the cath lab.  We do not have follow-up information on her.

The first ECG in the series, titled "12-Lead 3", shows ST elevation at the J point in V1 through V3.  In addition, the T waves are "hyperacute" - tall, broad, and asymmetrical. This can be an early, transient sign of myocardial injury.  Slight reciprocal depressions are seen in the inferior leads.  Lead V4 has a T wave inversion that is out of place with the progression of the T waves in V3 and V5.  Lead placement may be to blame.  Hyperacute T waves in a patient with chest pain should be taken very seriously.

The second ECG, titled "12-Lead 4", shows continued elevation at the J point in Leads V1 through V3, with a lessening of T wave amplitude.  In addition, Lead aVL is showing some T wave changes. The T wave is biphasic, and may be about to become inverted.  This is not an improvement!  V1 through V3 show us the anterior-septal wall, and an M.I. here indicates occlusion in the LAD.  Leads I and aVL show the high lateral area of the anterior wall, and damage here is an indicator that the occlusion is proximal.

The third ECG, titled "12-Lead 5", shows a "maturing" of the ST segment elevation.  Even though there is some significant artifact, we can see that the ST segment in V1 is coved upward, and the ST segment in V2 is flat.  Both shapes are abnormal, and a sign of CAD.  The T waves have become less pronounced, but V2 looks as if the T wave may become inverted in the near future.  V3 looks improved in this image.

The patient's clinical symptoms did not improve during these ECG changes.  Hyperacute T waves are not a definitive sign of STEMI, but they provide a highly visible warning that may catch attention.  They definitely are an indication to run serial ECGs, as these paramedics did. 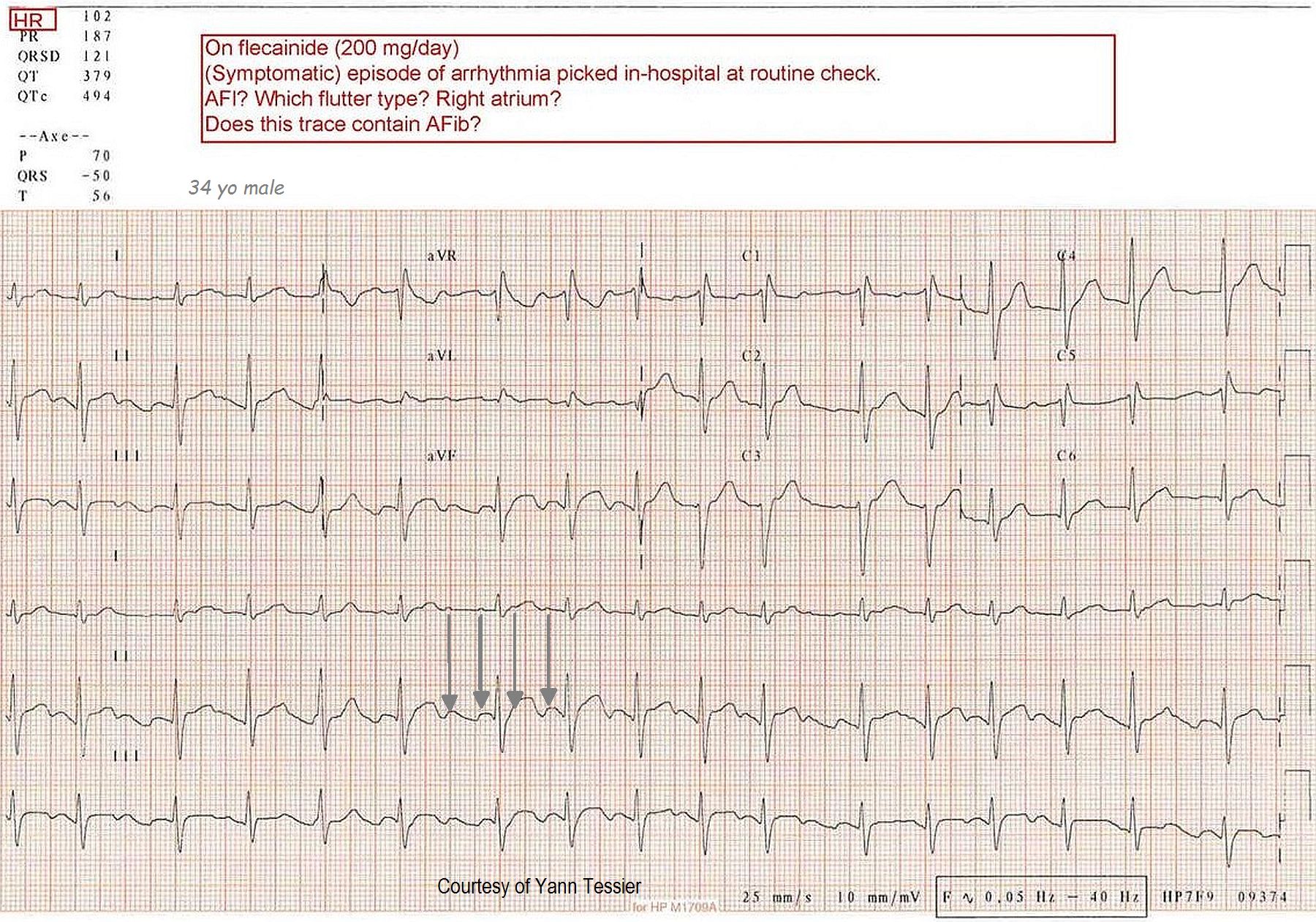 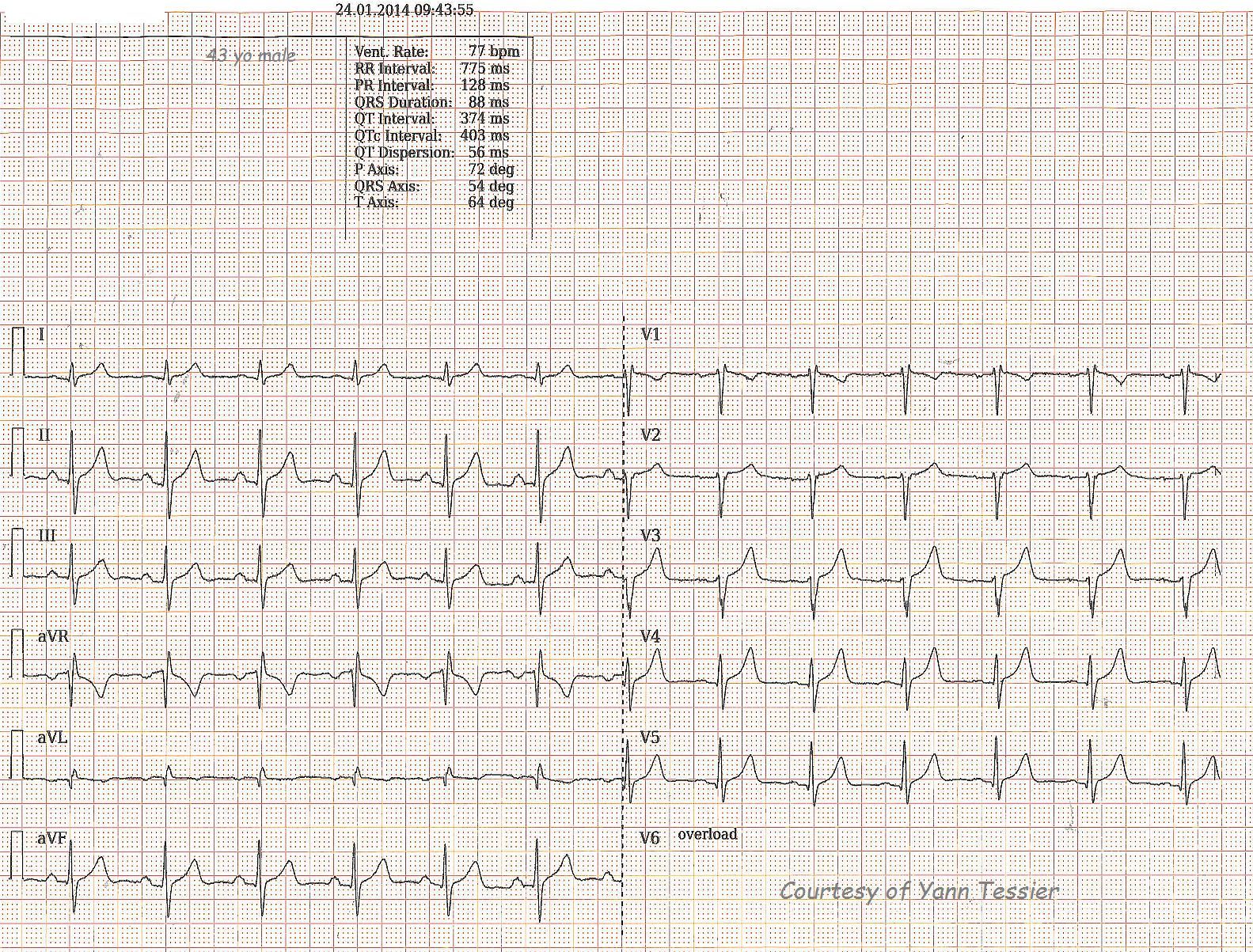 In the first ECG shown, we see an irregular tachydysrhythmia.  He has had periodic episodes of rapid heart rate since the age of 19, but is in good health otherwise.  He is on Flecainide, 200 mg per day.   The rhythm might look like atrial fibrillation to many people, but there are signs of regular, fast flutter waves (arrows).  The irregularity is caused by variable conduction of the atrial flutter.  The QRS is slightly widened, possibly due to the Flecainide, a sodium-channel blocker which slows conduction.

The patient usually felt palpitations during these periods of rapid heart rate, but had no syncopal episodes, chest pain, or other concerning symptoms.

The next ECG shows more apparent flutter waves.  The ST elevation is due to artifact which can occur on manually-obtained ECGs due to the type of filtering.  It is not uncommon to see dramatic ST elevation on manually-obtained rhythm strips which disappears when a standard filtered 12-Lead is performed.   On other ECGs, the patient also had periods of NSR and frequent PACs. (ECGs not shown).

The third ECG was obtained after the patient underwent successful radiofrequency ablation for atrial fib / atrial flutter.  He is now off antiarrhythmics, and feeling well.

For instructors and students, this is a nice "before and after" series to illustrate successful ablation.