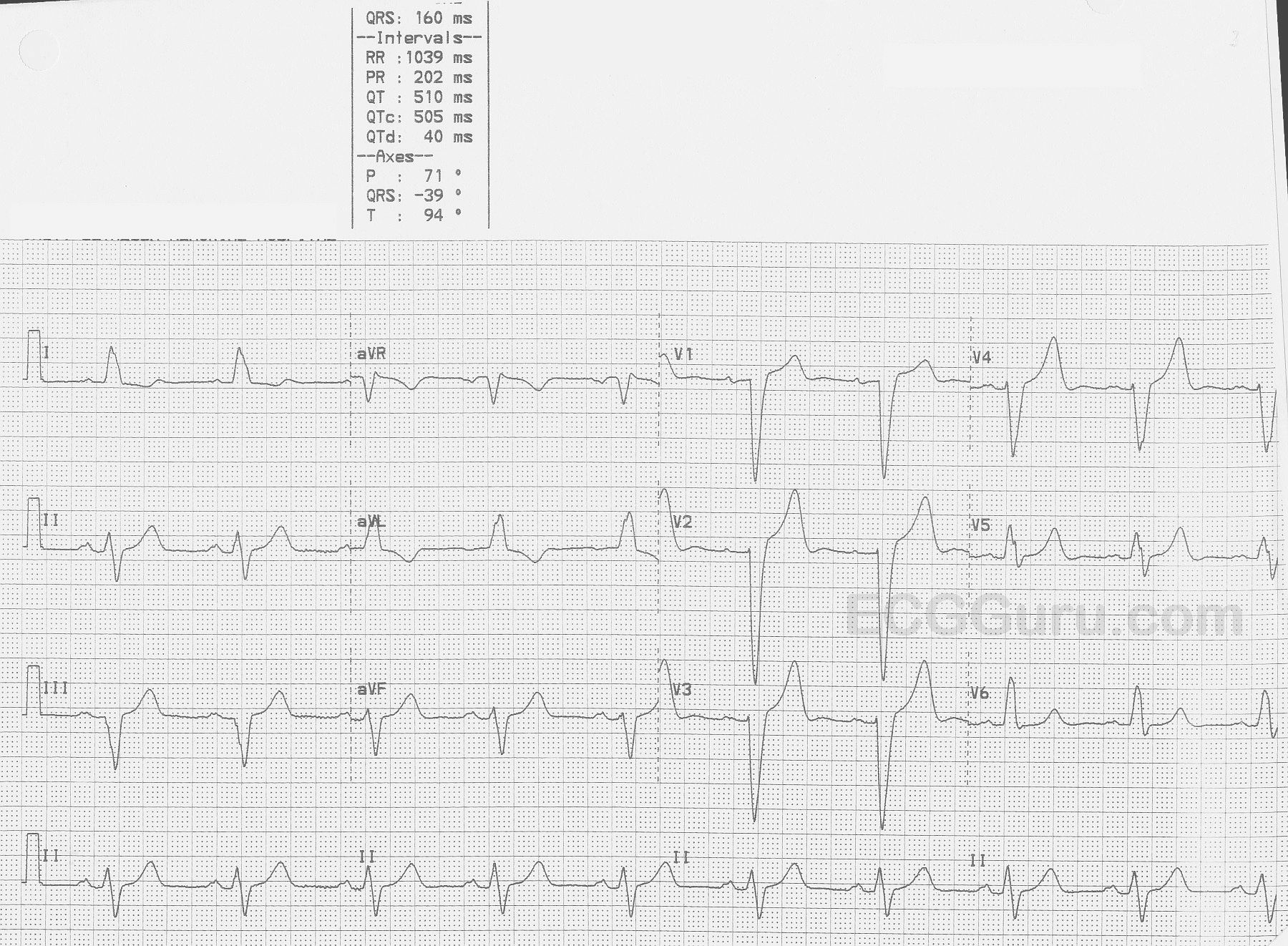 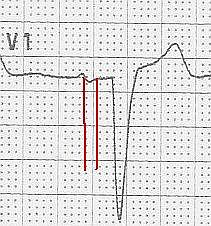 This ECG is taken from an elderly man with heart failure.

The ECG   The first feature that might capture your attention is the wider-than-normal QRS complex, which is 160 ms (.16 seconds).  The rate is 58 bpm. We do not know the patient’s medications or baseline rate.  There are P waves present, and so the rhythm is SINUS BRADYCARDIA. The P waves are broad , > 110 ms in Lead II (red lines in close up) and bifid, with greater than 40 ms between the two peaks in Lead II (blue lines).  In V1, the P waves are biphasic, with the terminal negative portion greater than 40 ms duration (red lines). This meets the ECG criteria for LEFT ATRIAL ENLARGEMENT, or preferably, LEFT ATRIAL ABNORMALITY. (https://LITFL.com/left-atrial-enlargement-ecg-library/) ECG criteria are not highly accurate for detecting atrial enlargement, and abnormal findings should be confirmed by anatomic measurement. (https://www.ncbi.nlm.nih.gov/pmc/articles/PMC2244611/).

The QRS complexes, as mentioned, are wide. Because there is sinus rhythm, we know the delay in conduction is due to interventricular conduction delay, and not to ventricular rhythm.  This ECG meets the criteria for LEFT BUNDLE BRANCH BLOCK. 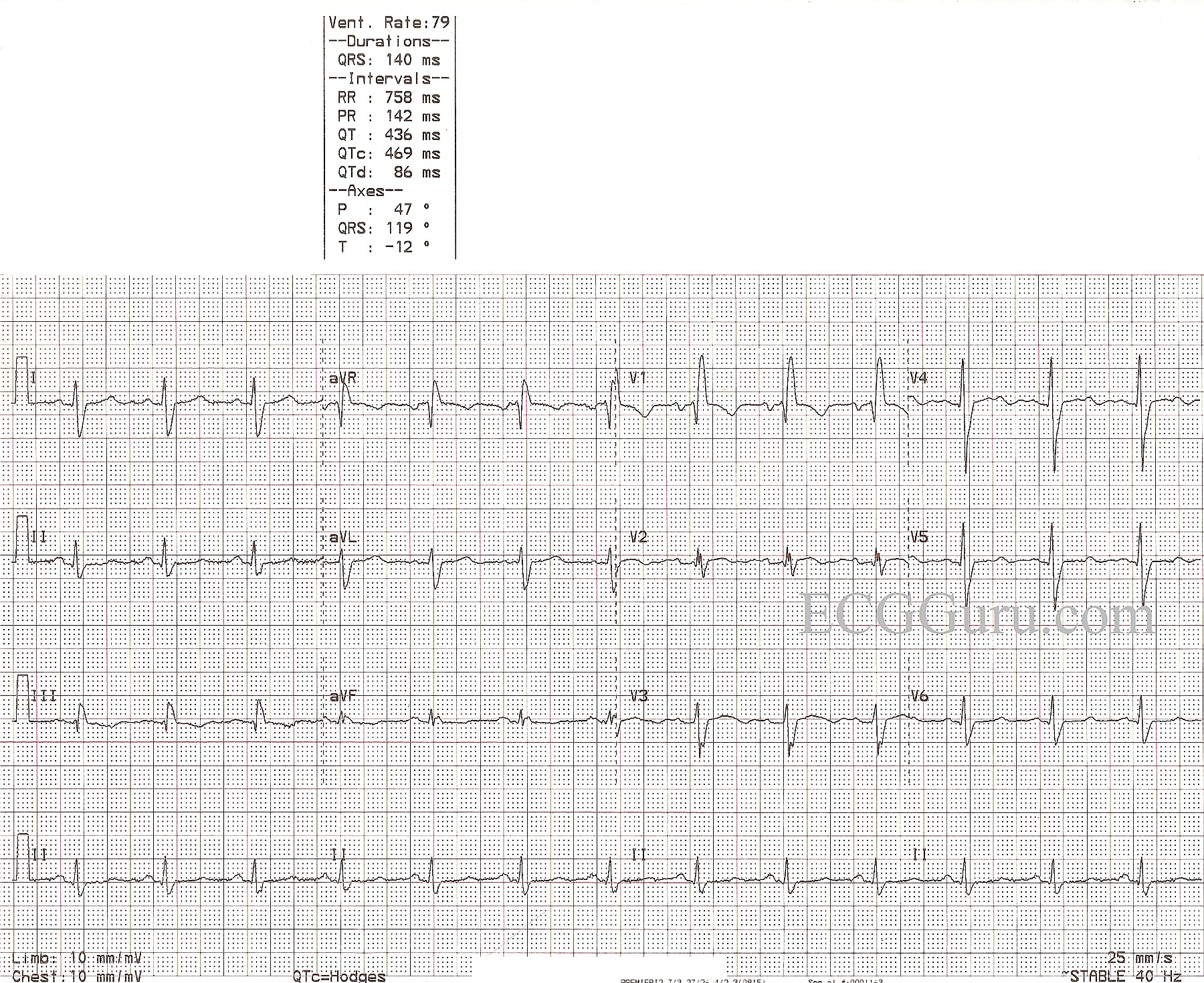 This ECG is from a 59-year-old man who was a patient in the Emergency Department with mild chest pain.  He had a history of coronary artery disease.  We have no other information about his medical history, medications, or outcome.

The causes of right bundle branch block are many.  The website, Life In the Fastlane has a good quick reference.

This patient has a slightly prolonged QTc interval at 469 ms, for which we do not know the reason, lacking clinical information.  The QT interval measures the total time it takes to depolarize and repolarize the myocardium, and it is measured from the beginning of the QRS to the end of the T wave.  The QT interval lengthens naturally in slow rates, and shortens with faster rates.  The QTc has been mathematically corrected to a rate of 60/min.   A good rule of thumb is the QT interval should be less than half the RR interval of the preceding beat. A long QT interval (>500 ms) has been associated with increased risk of torsades de pointes.

The ECG criteria for left bundle branch block are:

The left bundle branch (LBB) can be blocked permanently, temporarily, intermittently, or in the because of a fast rate.  When the LBB is blocked, conduction proceeds from the AV junction down the right bundle branch, depolarizing the right ventricle.  The impulse travels from the right ventricle across the left ventricle, cell by cell.  Conduction is slower this way, and there is asynchrony of the ventricles. This slow conduction and asynchrony of the two ventricles causes widening of the QRS complex. 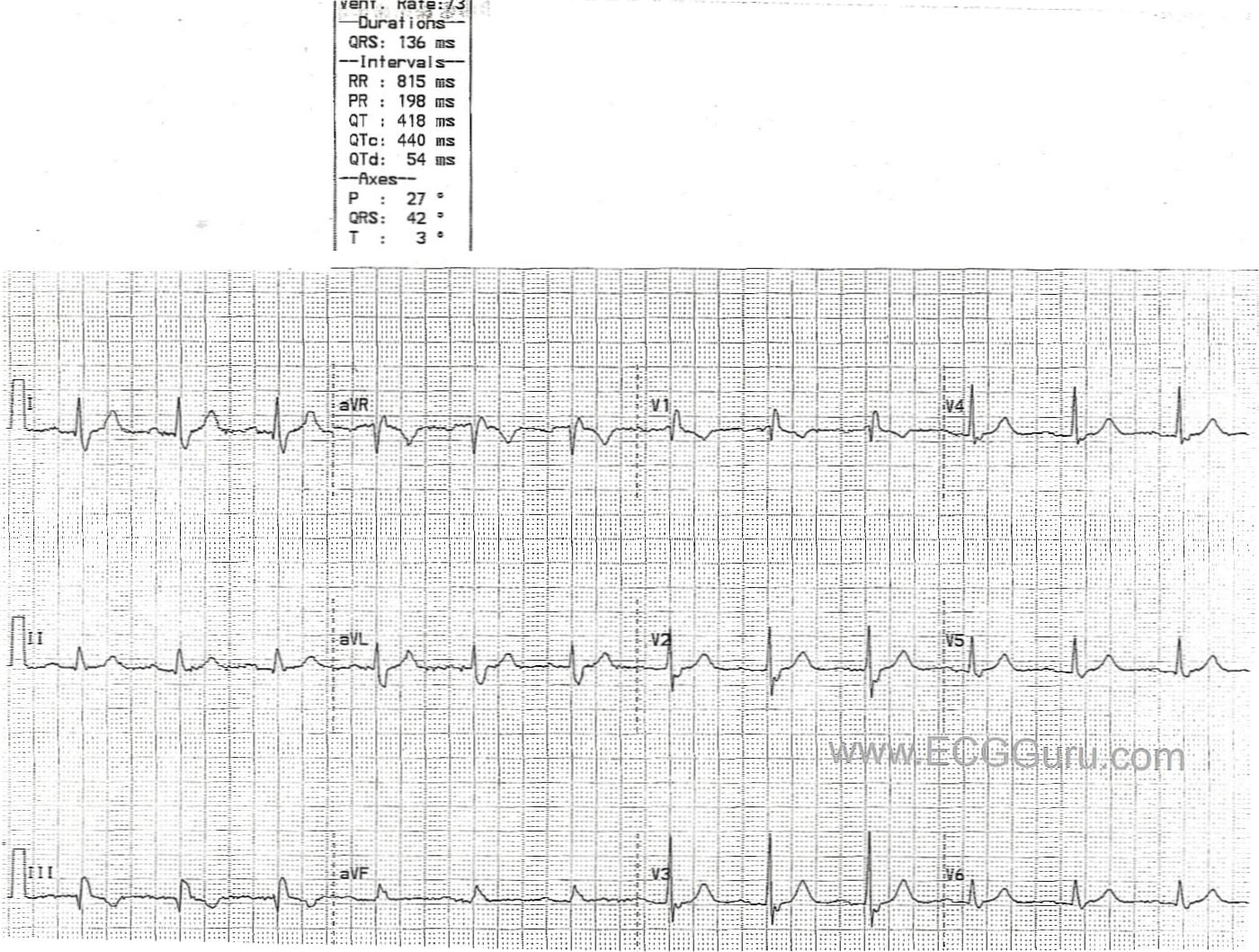 This ECG shows a normal sinus rhythm at 73/min. and a right bundle branch block.  The diagnostic characteristics of RBBB are:  wide QRS (greater than .12 sec.), supraventricular rhythm (in this case NSR), and an rSR' pattern in V1 with a small, wide S wave in Leads I and V6.  The R' and small s waves represent the right ventricle depolarizing slightly AFTER the left ventricle.  In fact, in RBBB, each lead should look pretty normal at first, with a terminal right ventricular depolarization wave added to each QRS complex.  This is because the left ventricle depolalrizes normally.  In this patient, R waves progress fairly soon in the precordial leads (V1 through V2).  It is not known in this case if it is due to poor electrode placement or patient causes.

This ECG is from a healthy young man in his 20's.  He was born with a ventricular septal defect (VSD) that was surgically repaired when he was a toddler.  He now has a right bundle branch block, which could be a result of the defect, or the surgery.  This is a good ECG for the Instructors' Collection because it clearly shows all the ECG characteristics of right bundle branch block:  wide QRS in a supraventricular rhythm (in this case, NSR), rSR' pattern in V1, wide or "slurred" S waves in Leads I and V6.  There is no rhythm strip below the 12 leads in this ECG, but there is no rhythm disturbance.