This ECG is from a 59-year-old man who was a patient in the Emergency Department with mild chest pain.  He had a history of coronary artery disease.  We have no other information about his medical history, medications, or outcome.

The causes of right bundle branch block are many.  The website, Life In the Fastlane has a good quick reference.

This patient has a slightly prolonged QTc interval at 469 ms, for which we do not know the reason, lacking clinical information.  The QT interval measures the total time it takes to depolarize and repolarize the myocardium, and it is measured from the beginning of the QRS to the end of the T wave.  The QT interval lengthens naturally in slow rates, and shortens with faster rates.  The QTc has been mathematically corrected to a rate of 60/min.   A good rule of thumb is the QT interval should be less than half the RR interval of the preceding beat. A long QT interval (>500 ms) has been associated with increased risk of torsades de pointes. 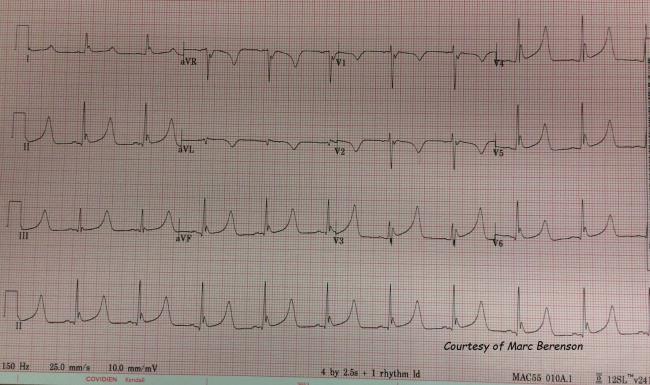