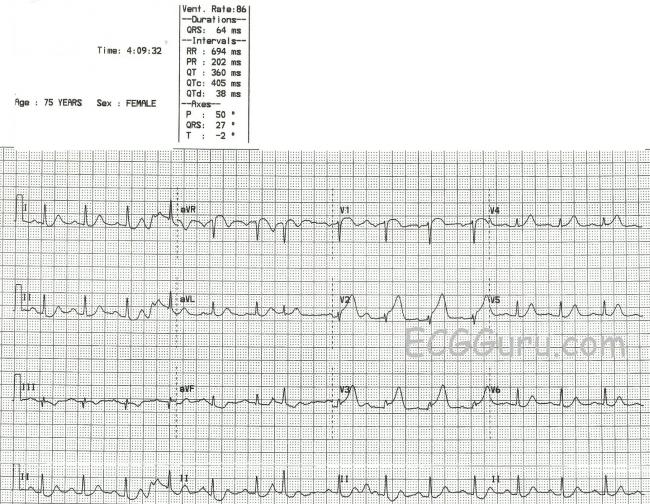 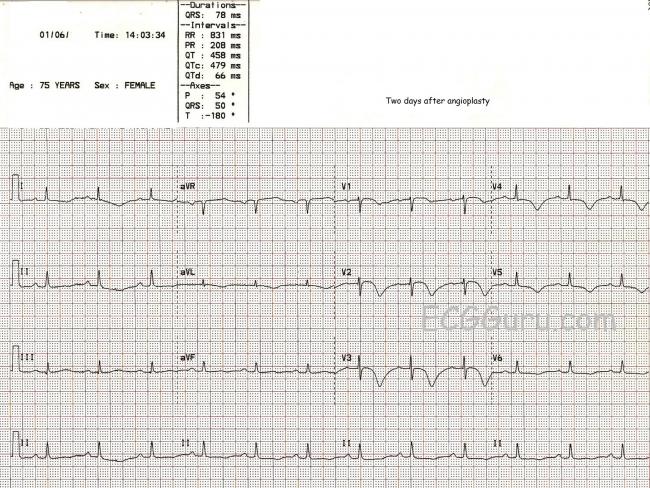 A series of ECGs can be a valuable addition to any teacher's collection.  This series follows a 75-year-old woman through three days, during which she experienced an acute anterior wall M.I., a catheterization with angioplasty and stents placement.

In the first ECG, taken at 4:09 am, the patient has presented to the Emergency Dept. with a complaint of chest pain. (Other details are no longer available).  Although there is some baseline artifact, it appears that the rhythm is sinus rhythm with one PAC (7th beat).  There is subtle but measurable ST elevation in V1, V2, and V3 (anterior-septal leads).  The shape of the STE in V1 is noticeably coved upward.  Even aVR has some STE, with coving.  There is equally subtle ST depression in Leads II, III, and aVF (inferior leads).  Fortunately, there are no pathological Q waves at this point, which would be an indication of necrotic tissue in the area of the M.I. (anterior-septal wall).

The patient was taken to the cath lab, where it was found that she had a 100% mid-left anterior descending artery occlusion, which was opened and stented.  She also was found to have widespread coronary artery disease, with the left circumflex artery 25% occluded (stented), the right coronary artery (which was dominant) proximately occluded 50% and stented, and the posterior descending artery 75% occluded (stented).

The second ECG, taken at 6:29 the same morning, after the cath procedure, shows some ST elevation with coving remaining in V1 through V3, and also aVR, but now with the loss of R waves in V1 and V2 and loss of R wave voltage in V3.  This represents the formation of pathological Q waves, and can be a permanent change in many cases.

The third ECG, taken two days later in the cardiac step-down unit, shows improvement, and progression toward healing.  The ST segments are still shaped in a slightly coved-upward shape, but they are less elevated.  The R waves have returned.  The T waves in V1-V3 are inverted.  The deeply inverted T waves of V2 and V3, especially, and classic for ischemia, and we even see the "ischemic zone" extending across the anterior-lateral wall, including V4 through V6 and Leads I and aVL.

The patient did very well to discharge, and we don't have followup after that.

It is always highly instructive to have sequential tracings in a case for which the clinical course is known. As per Dawn ― this 75-year old woman presented with new-onset chest pain and ECG-1. The most remarkable feature on this initial 12-lead are the taller-and-broader-than-they-should-be T waves in leads V2,V3. These are hyperacute changes and signal the need for timely cardiac catheterization for almost certain LAD (Left Anterior Descending) acute occlusion in progress. Although anterior Q waves have not formed ― anterior R wave amplitude is reduced.
As per Dawn ― ECG-2 is marked by reduction in the amount of ST elevation and near resolution of the hyperacute T waves ― but with development of new QS complexes in leads V1,V2. Fortunately ― ECG-3 marks the return of normal R wave progression to the anterior leads. The precordial ST coving and deep T inversion with prolonged QT suggests reperfusion of the LAD lesion has indeed occurred. Hopefully the loss of myocardium has been limited.