Irregular Rhythm in a Young Person 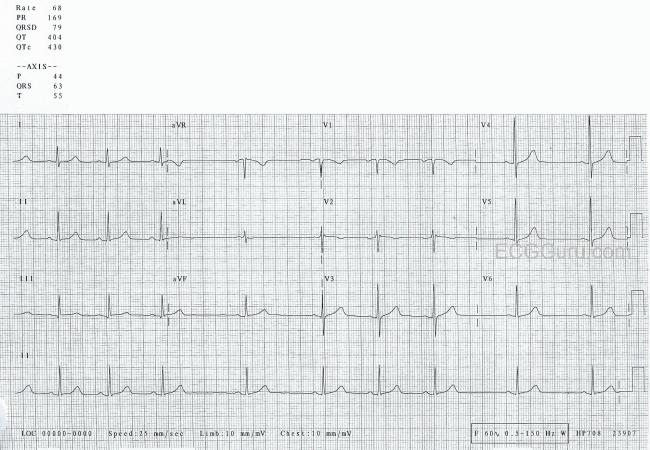 The Patient     This ECG is taken from a teenage boy whose mother was concerned that he has an “irregular pulse”.  He is otherwise very healthy, and has no complaints.

The ECG     The rhythm is irregular.  With such a short strip (12-Lead ECGs are often about ten seconds long), it is difficult to determine the exact reason for the irregularity.  One possibility is a sinus rhythm with PACs, which would not be unexpected in a young person.  The more likely interpretation is sinus arrhythmia, also very common in young people.  In a longer strip, we might be able to associate the rhythmic slowing and speeding of the rate with the patient’s respirations.  The P waves all look alike in each of the twelve leads. Different P wave morphology in the early beats would indicate PACs, but the similar P waves do not exclude PACs.

The J point – the end of the QRS and beginning of the ST segment – is at the baseline in all leads except possibly V2.  Remember to measure the J point against the T-P segment, rather than the P-R segment. A tiny bit of elevation at the J point is not uncommon in young men, and is not a worry when there are no symptoms, and the ST segment has a normal shape.  The ST segments here are concave upward, which is normal.  T waves are usually upright, but it is within normal limits for young people to have some T wave inversion in right-sided leads (III, V1, V2).  We see that in this patient in V1 and V2.

It is important to consider the patient’s age and gender when interpreting the ECG.  The presentation, including symptoms, history, medications, and abnormal physical findings are also important.  What might be abnormal in an elderly person with chest pain could be perfectly normal in a young, healthy person.

Now, we are more concerned about why this mom is checking her healthy child’s pulse.    ;-)

The ECG in the Figure was obtained from an otherwise healthy teenage boy, whose mother was concerned about an “irregular pulse”. This case provides an excellent example of the importance of the clinical history with regard to ECG decision-making.

— As per Dawn — the diagnosis for this irregular, narrow-QRS rhythm strip is sinus arrhythmia. All 9 P waves in the long lead II rhythm strip manifest identical morphology. Looking above at each 3-lead group of simultaneously-recorded leads — P waves also do not change appreciably within any given lead. While possible for PACs to arise from an atrial focus close to the SA node — which therefore may result in similar-looking P waves — the fact that none of these 12 leads show appreciable difference in P wave morphology speaks highly against there being PACs. The rhythmicity of this 9-beat rhythm strip also argues again there being PACs — because PACs characteristically occur recognizably earlier-than-expected — and we do not see that here! Similarly, lack of P wave morphology variation argues against “wandering atrial pacemaker” — which leaves us with sinus arrhythmia as the diagnosis.

— I have always gone by the definition for sinus arrhythmia being a sinus-mechanism rhythm in which there is ≥0.12 second ( = 3 little boxes in duration) variation in P-P intervals. The degree of P-P interval variation seen here is clearly more than is typically seen — though not outside of the range I’d consider “potentially normal sinus arrhythmia”. That said — although the history reported was, “He is otherwise healthy and has no complaints” — I would definitely want to VERIFY this negative history myself before signing off this case. I’d feel better about sinus arrhythmia with this degree of P-P interval variation if this was an athletically active teenager — who on my personal questioning confirmed never having symptoms of chest pain, syncope or presyncope.

— As per Dawn — this identical ECG would be interpreted VERY differently if the history was different. For example, if the patient was an older adult with symptoms of fatigue, who was not on rate-altering medication — one would have to consider entities including recent ischemia/infarction, hypothyroidism, and especially SSS ( = Sick Sinus Syndrome). However, in an asymptomatic and definitely healthy young athletic teenager — a benign sinus arrhythmia is almost certainly what we have.

— Otherwise, I suspect this patient either has an unusual chest wall appearance or electrode leads for V1 and V2 may have been inappropriately placed too high on the chest. That’s because high V1,V2 placement is a good bet when there is a significant negative component to the P wave in these leads — when we unexpectedly see an rSr’ complex in one or both of these leads — and/or when QRST complexes in leads V1 and V2 resemble the appearance of the QRST in lead aVR.

— Finally, although the area of transition is normal (ie, the R wave becomes taller than the S wave is deep between leads V2-to-V3) — the amplitude of the R wave in lead V3 becomes quite tall abruptly. This may be normal — or more likely, it is the result of faulty chest lead placement.

Bottom Line — This ECG (including the rhythm strip) most likely is “normal” given the clinical scenario.

FOR MORE on the ABOVE POINTS:

— Recognition of Lead V1, V2 Lead Misplacement — Please CLICK HERE — and check out My Comment at the bottom of this page in Dr. Steve Smith’s ECG Blog.