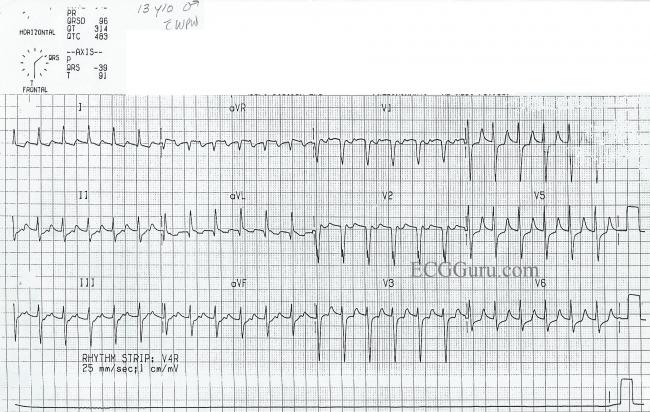 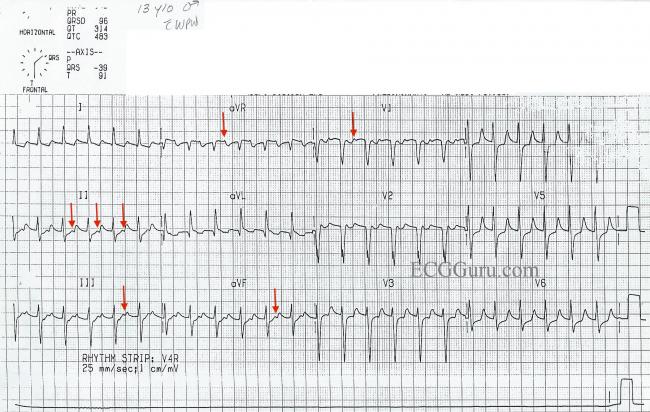 W-P-W is often diagnosed in children and teenagers.  Treatment depends upon the hemodynamic stability of the patient during episodes of SVT.  Catheter ablation can be used to disable the accessory pathway in many cases.

*. The second image has been added to accompany Dr. Ken Grauer's comments below.

As per Dawn — this case reflects AVRT = (AtrioVentricular Reciprocating Tachycardia) in a 13-year old male with known WPW (Wolff-Parkinson-White) syndrome. The question comes up as to how we would interpret this tracing IF it were not known that this patient has WPW?

The 1st Step in the interpretation of any arrhythmia (after ensuring that the patient is hemodynamically stable) — is to simply describe what is seen. There is a regular narrow-complex tachycardia at a rate just under 150/minute without evidence of sinus P waves. That is, there is no regularly occurring upright P wave in lead II. Although the baseline in lead I almost presents a sawtooth pattern — there is no evidence of atrial flutter in other leads. This leaves us with the diagnosis of a reentry SVT (SupraVentricular Tachycardia) as the likely diagnosis.

Terminology of reentry SVT rhythms has evolved. The older term (still in common use) is PSVT = Paroxysmal SupraVentricular Tachycardia, so named for its frequent abrupt occurrence. The newer term is AVNRT = AV Nodal Reentrant Tachycardia, which provides a better idea of the mechanism of the arrhythmia. In patients with an AP (Accessory Pathway) — instead of AVNRT, the term “AVRT” ( = AtrioVentricular Reciprocating Tachycardia) is used, which as Dawn mentioned — may either be “orthodromic” if the impulse first goes through the AV Node — or “antidromic” if the impulse first goes down the AP. The QRS complex will be narrow with orthodromic AVRT — since the impulse is conducted to the ventricles over the normal AV nodal pathway. This is by far the most common form of AVRT in patients with WPW, making up ~ 90-95% of cases. In contrast — the QRS will be wide with antidromic AVRT — because the impulse arrives to the ventricles by conduction over the AP. Fortunately, acute treatment (ie, with vagal maneuvers, adenosine or AV nodal blocking drugs) — is virtually the same for either antidromic or orthodromic AVRT (because the AV node forms an essential part of the pathway in either case). However, longterm management of reentry SVT rhythms may differ depending on whether or not an AP (accessory pathway) is present. This is because of the potential for much more dangerous rhythms such as atrial fibrillation or flutter in patients with WPW.

The PEARL in this case — is to recognize the presence of retrograde conduction (RED arrows) in several leads on this tracing. Retrograde conduction is seen as a negative P wave in the inferior leads — and as a positive deflection in leads aVR and V1. These 5 leads are by far, the most common leads in which retrograde atrial activity can be recognized. Note that the RP’ interval (ie, distance from the QRS to the retrograde P wave) — is relatively long! Because the reentry cycle with AVNRT is entirely contained within the AV Node — the distance traveled over the reentry circuit is less than it is when a portion of the reentry circuit lies outside of the AV node (as it does when the patient has WPW). Therefore, the fact that the RP’ interval in this case is long (occurring in the latter portion of the ST segment) — should suggest to us that an AP is likely to be involved!

Two final points: i) The QRS complex almost looks wide in V1,V2. However the other 10 leads strongly support our contention that the tachycardia is supraventricular (with a narrow QRS); and ii) There looks to be a lot of chest lead ST depression and even T wave peaking. The significance of this would be unknown in a hemodynamically stable 13-year old with this rhythm. Prudence suggests revisiting assessment of ST-T wave changes after converting the rhythm to sinus with a repeat 12-lead ECG. Chances are these ST-T wave changes will have then resolved.

I review the basics for assessing and managing PSVT in Section 14.3 (from my ACLS-2013-ePub). To download — CLICK HERE — The part that discusses distinction between AVNRT vs AVRT begins with Section 14.3.7.

AVNRT and AVRT tend to cause a lot of confusion among electrocardiographers - and not just the beginners!

First, the names are very similar. Second, they can look very similar on a rhythm strip if you don't look very closely (and sometimes even when you DO look closely).

Just remember that due to the micro-reentry of AVNRT, the activation of the atria and ventricles is virtually simultaneous. Therefore, the retrograde P waves are almost never seen. When they are seen, they appear as tiny s waves ("pseudo-s waves") in the inferior leads and tiny r' waves ("pseudo r prime waves") in Lead V1. The pseudo-s waves will look as though they are actually attached to the end of the QRS complex in the inferior leads, but if you look very closely (or even better, if you use a magnifying lens) you will frequently see a slight "jog" or slurring between the end of the QRS complex and the pseudo-s wave. As for the pseudo-r prime" wave in V1, it can usually be distinguished by the fact that a true r' is a direct extension of the upslope of the S wave and continues the straight line of the S wave. A pseudo-r' will usually start to slur or angle away from the slope of the S wave as it reaches the baseline. A good example of a true r' in V1 is an incomplete RBBB. Find examples of iRBBB and a pseudo-r' on the internet (or perhaps even on this website) and compare them. If you look closely, you will see there is a difference! But the thing to remember here is that whether it is a pseudo-s or a pseudo-r', the retrograde P wave will appear ATTACHED to the end of the QRS complex.

The situation is different with AVRT. The circuit is much larger ("macro-reentry") and the atria are always activated AFTER the ventricles. Therefore, there is ALWAYS a retrograde P wave following the QRS during an AVRT and there will definitely be a separation from the end of the QRS complex. You won't need a magnifying lens to see that. The retrograde P will usually be somewhere in the ST segment, but it can also be on the upslope of the T wave. If it is on the upslope of the T wave, it is usually not too difficult to see, but sometimes it can blend in - imperceptible to all but the most seasoned electrocardiographers. Whenever you go looking for retrograde P waves, remember that they are inverted (negative) in the inferior leads (which may or may not include V5 and V6, depending on the placement of their electrodes), upright in V1 and upright or isoelectric in Lead I.

Of course, there are rare instances in which the return circuit in AVNRT is the slow pathway and the AP in an AVRT has slow, retrograde decremental conduction - both of which will cause the retrograde P waves to appear closer to the following QRS complex. But these are rare situations and best saved for a more advanced discussion.