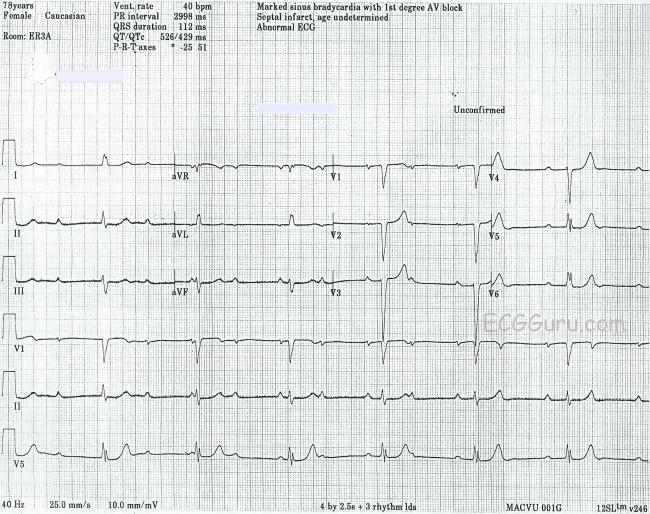 The immediate concern for patients with AV dissociation and escape rhythms is the RATE. If the rate becomes very slow, it can have deleterious effects on the patient’s hemodynamic status.  The rate can usually be quickly enhanced with the use of a pacemaker – either temporary trans-venous pacing or trans-cutaneous pacing.

Lastly, the ST segments over this entire ECG are flat and horizontal, a possible sign of ischemic disease.  It is not localized to a specific part of the heart or coronary artery’s area.

Interesting ECG from a 78-year old woman, about whom we do not know any details of her medical history. I agree with Dawn’s interpretation. I’ll just reinforce a few of the points she made.

As to the rhythm in this case — the diagnosis is complete ( = 3rd degree) AV Block because: i) the atrial rhythm is regular (with calipers you can walk out all P waves on this tracing, at a rate just under 100/minute); ii) the ventricular rhythm is regular ( ~ 40/minute); iii) there is complete AV dissociation (no P waves are conducting); andiv) the ventricular rate is slow enough (well under 50/minute) to provide opportunity for conduction — but NO P waves conduct to the ventricles despite this adequate opportunity to do so.

The QRS is a little wide — but not markedly so. Measurement of intervals IS an area in which computerized interpretations ARE good — so the 112 msec given for QRS duration looks to be accurate. QRS morphology resembles that of LBBB, but is just not wide enough to qualify for this. So I agree with Dawn that the escape pacemaker may indeed be arising from somewhere in the conduction system (AV Node, Bundle of His), probably with some preexisting conduction defect (perhaps incomplete LBBB). That said — whether the escape pacemaker is supraventricular (from the AV Node) or lower down in the ventricles is far less important than the ventricular response, the patient’s hemodynamic status, and the clinical circumstances that precipitated developed of complete AV Block in this 78-year old woman.

Thanks for posting one of my favorite topics: AV dissociation and 3rd degree AV block. However, your discussion is so thorough that, like Dr. Grauer, I just want to reinforce some of the findings.

1. There are two different rhythms here - one sinus and the other (most likely) junctional. I say "most likely" because the QRS width is borderline widened and such complexes can be seen from the common bundle after entering the ventricle (rare!). A most important point to be made here, however, is that the diagnosis of 3rd degree AV block does NOT depend on finding AV dissociation, but rather on finding AV dissociation AND P waves that should have conducted but did not. This ECG certainly appears to meet those criteria. As Dr. Marriott so famously pointed out: "The P waves should probe all areas of diastole [i.e., the T-P segment]." (Brackets are mine).

2. As you pointed out, both rhythms are regular. The escape rhythm - whether junctional or ventricular - should be very regular indeed since neither the junction nor the ventricles are influenced significantly by the autonomic nervous system (they ARE influenced, however, by the endocrine system!). Any irregularity in the ventricular rhythm would indicate that capture beats are occurring and that there actually is no block at all.

3. Another thing I wanted to point out about escape rhythms: they tend to appear at the low end of their normal escape interval. This is a junctional escape rhythm whose normal range is 40 - 60 beats/min and it appears here at a rate of... 40/min! The same thing goes for ventricular escape rhythms - they are likely to be closer to 20/min rather than 40/min.

4. If you look at the Lead II rhythm strip, you will see that there is considerable variation in the morphology of the QRS intervals. This happens whenever a lead is equiphasic (or nearly so). A slight shift in the physical position of the heart can have a significant effect on the direction of the QRS vector in that lead. We usually see this as a respiratory effect in the inferior leads, Lead III especially. As the person inhales and exhales, the movement of the diaphragm changes the orientation of the heart with respect to the mean QRS vector and such changes appear. When they appear in a cyclical manner, they are totally benign and do not imply any problems.

5. This is an incomplete LBBB (iLBBB). How do I know this? There is a finding on this ECG that is highly suggestive of iLBBB aside from the width of the QRS interval. If you look closely at Leads V5 and V6, you will see a small, initial slurring of the QRS. It looks like a delta wave, but it isn't. This finding is highly suggestive of iLBBB though the sensitivity is apparently somewhat low (we are fortunate to see it here!). I have included a snippet from the ECG with the slurs indicated by arrows.

6. One should always remember that while there may be complete 3rd degree AV block in the antegrade direction, impulses may conduct quite normally in the retrograde direction. Thus, atrial echo beats can occur, which would interrupt the sinus rhythm. However, because of the location of the block in the AV node, such impulses would be highly unlikely to travel back down to the ventricles and produce a ventricular complex.

To anyone who might want to join in the discussion, please feel free to do so - even if it's just to ask a question or request a clarification of something mentioned in a post. Don't be intimidated by any of the other posts. This site is a great source of ECG education.