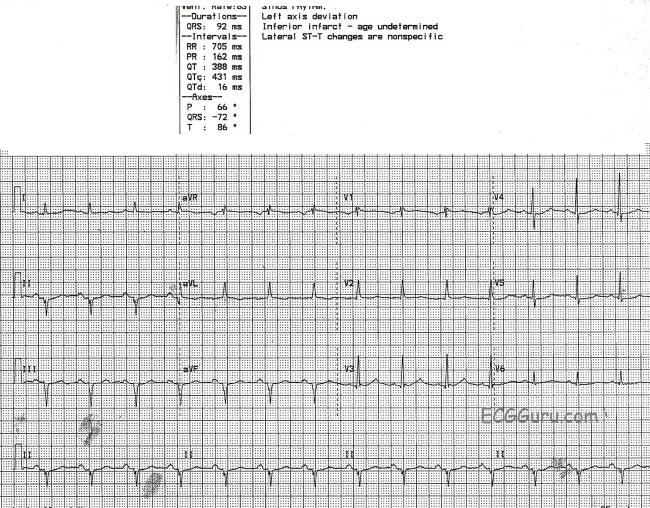 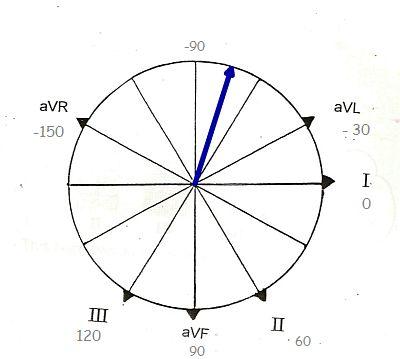 If you are teaching frontal plane axis to your students, you will need to teach them HOW to determine the axis - usually beginning with the QRS axis and then adding the P and T waves.  But, you also need to teach them WHY we measure axis, to provide relevance to something that may seem challenging to beginners.  There are many ECG interpretations that rely heavily or are dependent upon the determination of the axis.

This ECG is a great example of left axis deviation.  The cause is readily discernible, if your students know the ECG signs of myocardial infarction. This patient had an inferior wall M.I. in the distant past, and now has pathological Q waves in Leads II, III, and aVF.  Pathological Q waves in related leads in a patient with history of M.I. are a sign of necrosis, or permanent damage, in that part of the heart.  The inferior wall has lost an extensive amount of tissue, which is now electrically inactive as well as mechanically inactive.  (You may also find it helpful to show students videos of ventriculograms showing normal LV function and hypokinesis of the LV due to M.I.)  Because of the loss of electrical activity in the inferior wall, the "mean" electrical direction (or axis) is AWAY from the inferior wall.  That is, the electricity travels AWAY from II, III, and aVF and TOWARD I and aVL.

Many of the blogs and webpages listed in our "Favorites" address the subject of axis determination.  Here is one from Cardio Rhythms Online if you would like a review.

(You may also find it helpful to show students videos of ventriculograms showing normal LV function and hypokinesis of the LV due to M.I.) - See more at: http://ecgguru.com/comment/reply/546#comment-form  IS THIS POSSIBLE????

Hi, Marionnurse-  the R wave progression IS faulty here. Possibly poor lead placement. Sometimes it is hard to find a tracing that perfectly illustrates one thing without some other, inexplicable flaws creeping in.

If you were asking about the ventriculograms, VERY possible. We have posted several ventriculograms on this site on the "resources" page. Also on the ECG GURU YouTube channel. With a little practice, you will soon realize that ventriculograms are pretty easy to read. Compare the normal VG with the one with a stunned inferior wall. You will readily see what M.I. can do to the myocardium. Echocardiogram (ultrasound) is great for this, too, but I think it is harder to "see" if you are not experienced. My students have always responded well to visual material.

Perhaps some of the other Gurus out there will comment on the R wave progression in the chest leads.

Given the old infeior MI I was willing to attribute the tall R-waves in V2 and V3 to concomitant old posterior MI.

Agreed - and that changes the R wave progression (or the horizontal axis) - a good topic for more advanced students.  Thanks, Vince!

Can u comment on leftward axis beyond -60 ?  My understanding is that an inferior MI or other causes are UNlikely to cause an axis beyond -45 and so  bundle branch disease (LAHB)would have to exist despite the inferior MI

There are some unusual happenings on this ECG. The rhythm is sinus. Intervals are normal. There is marked LAD - with an estimated axis of -70 degrees. There is no chamber enlargement. Regarding QRST Changes:

CLINICAL IMPRESSION: It is difficult to know what to make of this tracing. The QS complexes in the inferior leads are virtually diagnostic of prior inferior MI - especially with the notching in the downslope of the QS in lead II. We suspect associated LAHB (Left Anterior HemiBlock) is present in view of the markedly leftward axis. Added to this is IRBBB (incomplete RBBB) - plus an unusal qR pattern in leads V2,V3 with early transition between V2-to-V3. Whether these anterior precordial lead findings represent prior posterior infarction or scarring from cardiomyopathy is uncertain. Perhaps an Echo, serial tracings and more clinical follow-up will be needed in order to know for certain.

P.S. In a sense - inferior MI and LAHB are “competing conditions”, in that both may produce negativity in the inferior leads. This is especially true when the result of a prior inferior infarction is such that a predominant negative deflection is present in the inferior leads. The difference - is that “pure” LAHB should produce an rS complex in the inferior leads. This is because the LAH (= Left Anterior Hemifascicle) lies to the left and superiorly wrt the LPH (Left Posterior Hemifascicle). Thus, with “pure” LAHB - initial activity goes away from the blocked LAH = to the right and inferiorly. This is OPPOSITE of the direction of the very first portion of electrical activity with an inferior MI, in which necrosis in the inferior wall produces a Q wave (= negative deflection) in the inferior leads. Initial "Bottom" LINE: It is sometimes DIFFICULT to tell if both LAHB and inferior MI are present.
I think the long lead II rhythm strip in this case is revealing. Whereas I initially thought from looking only at the 3 beats in lead II of the 12-lead that there was a QS in lead II - there is actually a tiny-but-real initial r wave - then that notch on the initial part of the downslope on the way to predominant negativity. I think what we are seeing is the result of some initial “competition” between the LAHB (which is trying to urge the initial depolarization vector to the right and inferiorly) - and the Inferior MI (which is diverting initial electrical activity superiorly in opposition to the necrosis in the inferior wall). This is the probable cause of the “notch”.
While I am not accustomed to seeing the qR pattern in V2,V3 that we have here - this may represent similar “competing conditions” between posterior MI and LAHB. Although the LAH does lie superior and leftward (compared to the LPH which lies inferior and rightward) - in 3 dimensions, the LAH also lies slightly “anterior” to the LPH (hence its name “anterior” vs “posterior” hemifascicle). This is why you sometimes see very poor r wave progression with LAHB (ie, loss of some “anterior forces” from the block in the LAH - therefore predominance of posterior forces from the remaining conduction fascicles). This may be the reason we DO see a small q wave in V2,V3. This initial negativity from the LAHB in the transverse plane might then be overwhelmed by the posterior MI that produces predominant anterior forces (tall R waves) in V2,V3 …. It may simply be because initial forces from the LAHB occur an instant before initial forces resulting from posterior MI that we are able to catch a glimpse of that tiny negative deflection (q wave) in the anterior leads.
BOTTOM LINE: A Vectorcardiogram would tell the tale - because it magnifies 3-dimensional orientation of forces. Alas, Vectors are a “dinosaur” in the ECG world in the year 2014 … Another way to tell might be reconstruction of events IF serial prior tracings were available. Unfortunately - I don’t think they are. Scarring from cardiomyopathy and tortuous aorta are other known reasons for qR complexes in anterior leads. Perhaps additional followers of ECG Guru might have other theories. My “hunch” at this time however is that this ECG manifests a series of “competing conditions” from an highly unusual presentation of prior LAHB with superimposed infero-postero infarction - with incomplete RBBB thrown in as a final bonus (the rSr’ in V1).