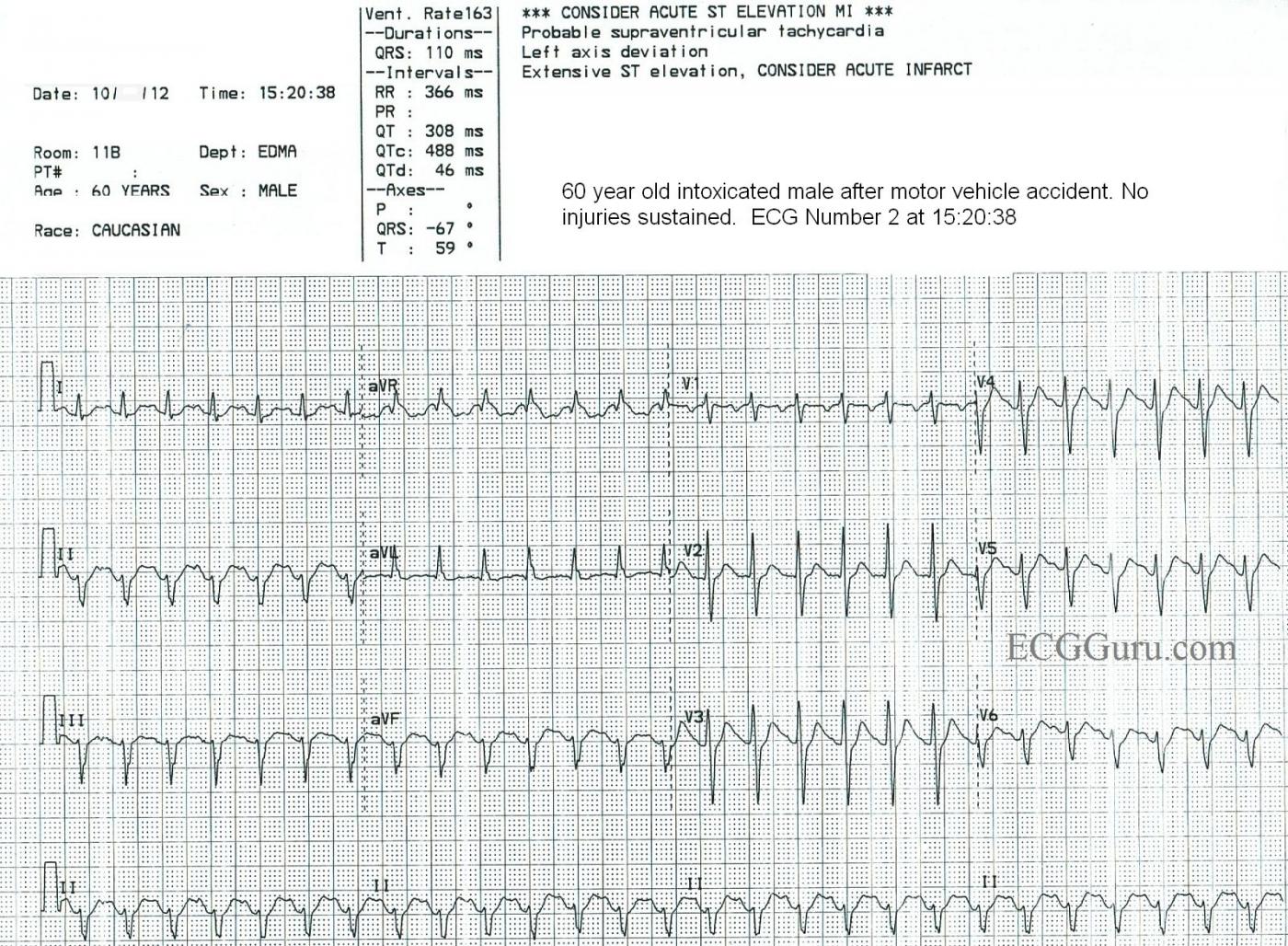 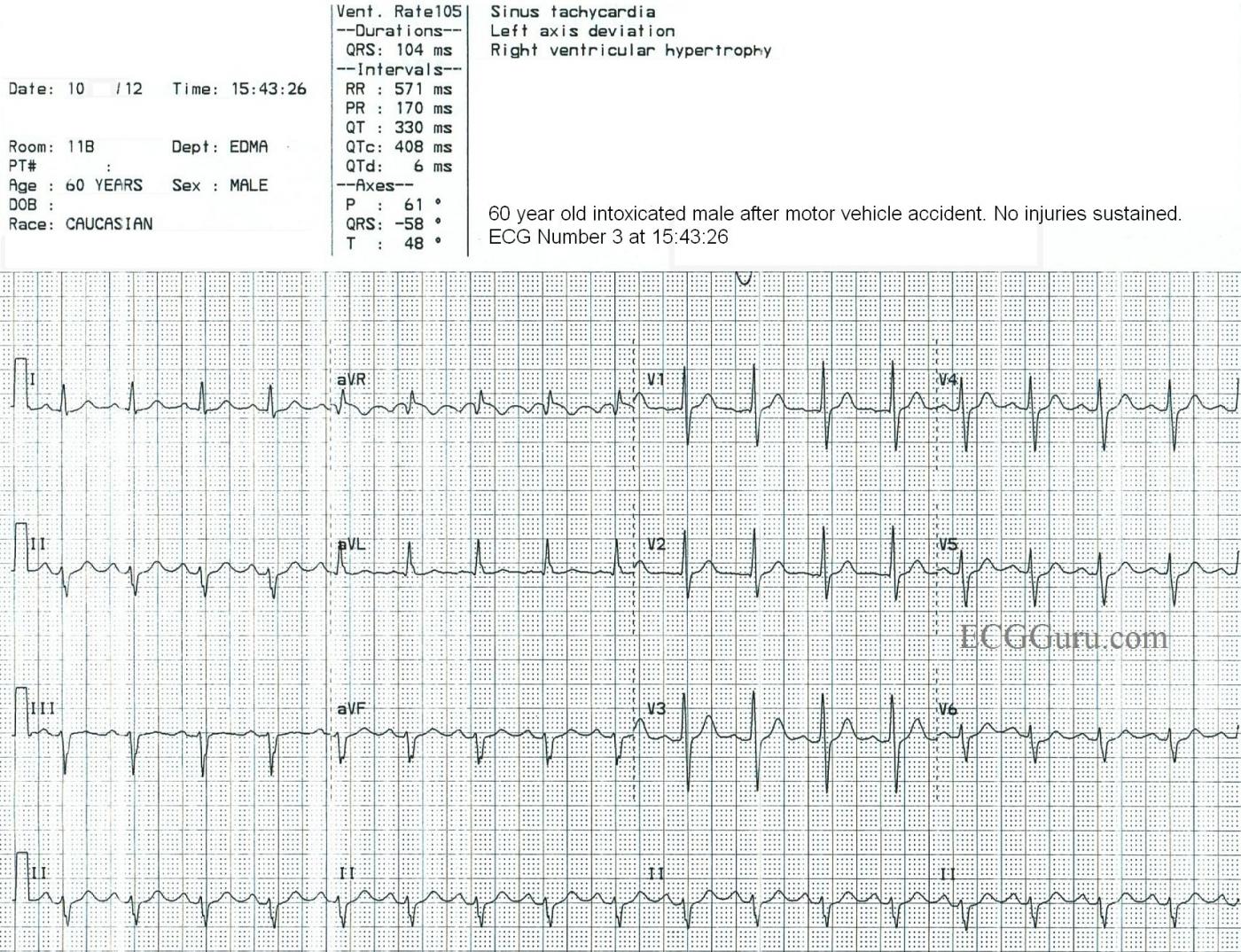 This series of three ECGs is from a 60-year-old man who was brought to the Emergency Department after being involved in a motor vehicle accident.  No injuries were found, but the patient was severely intoxicated by alcohol consumption.  He was conscious but agitated.

The first ECG was taken by fire-rescue personnel at the scene of the accident. His hemodynamic status was stable, and the rate was not addressed in the field. ECG No. 1 shows a supraventricular rhythm at 161 bpm, with a narrow QRS and P waves visible before each QRS.

A notable feature of this ECG are the left axis deviation, by default diagnosed at left anterior hemiblock (left anterior fascicular block).  The .10 second QRS width is typical of LAHB, as is the rS pattern in Lead III.

Also  noted is the unusual R wave progression in the precordial leads.  The R waves are prominent in V2, and then fail to progress across the precordium, and the S waves persist. This is probably due to the hemiblock.  We do not know this patient’s medical history, except that he self-described as an “alcoholic”.  LAFB can be associated with coronary artery disease.

Now being evaluated in the Emergency Dept., we see the patient's heart rate is 163 bpm.  Some variability in the rate was noted with patient agitation and activity, so it was determined that the rhythm was probably sinus tachycardia.  There were no other significant changes in the ECG from the first one.  Unfortunately, we no longer have access to lab results, so we do not know his electrolyte or hydration status.  Labs confirmed ETOH intoxication.

After IV fluids and a short rest, the patient is much less agitated, and is conversant.  His heart rate is now 105 bpm.  This rate was reached by gradual increments, further evidence that this was SINUS TACHYCARDIA all along.  Reentrant rhythms (AVNT, AVNRT, atrial flutter) start and stop abruptly.  Some leads on ECG No. 3 may suggest an underlying atrial flutter (aVR, aVF), but the waves do not “march out”.

At rates over 140 per minute, it can sometimes be difficult to differentiate sinus tach from reentrant tachycardias (PSVT).  Seeing gradual adjustments of the rate favors a diagnosis of sinus tach.  Also, seeing an obvious “cause” of sinus tach helps.  In this case, the patient was a chronic alcohol abuser who was intoxicated.  This is associated with sinus tachycardia, due to stimulation of catecholamine secretion and cell membrane alterations.  Also, he was agitated and possibly dehydrated.

Differential Diagnosis of a regular SVT

Interesting sequential case study by Dawn of 3 successive tracings illustrating sinus tachycardia. As per Dawn — ECG #1 shows a regular SVT ( = SupraVentricular Tachycardia) rhythm at a rate of ~ 165/minute. Sinus P waves are present — though they are not initially obvious. That’s because the rapid rate partially hides the upright P wave in lead II, which we barely see deforming the terminal portion of the T wave in this lead. That said, we know that this terminal deflection is a P wave — because it corresponds precisely with the simultaneously-obtained upright deflection in lead I — and, it appears to have a similar PR interval as the P wave that we can see in lead aVF — and, with the negative P wave in lead V1. The important clinical point is that although lead II is usually the best lead for identifying P waves — there are times in which other leads may be needed to identify sinus P waves. That is the case here.

There is little change in this clinical picture in ECG #2. However, in ECG #3 after the heart rate has slowed — a distinct, upright sinus P wave is now clearly visible in lead II. Of note — we have lost the negative P wave deflection in lead V1 in ECG #3. I strongly suspect this is due to variation in lead placement — as R wave progression has changed. That is, the R wave is equal (if not a little bit taller) compared to the S wave in lead V1 in ECG #3 — whereas the S wave in lead V1 was greater than the R wave in lead V1 for both ECGs #1 and #2. Finding a deep negative component to the P wave in lead V1 is often a clue that leads V1,V2 have been place 1 or 2 interspaces too high on the chest. If this were the case (and if ECG #3 was the tracing that represented correct precordial lead placement) — then we have abnormal findings of both LAHB and R=S in V1 to explain, though neither of these findings represents an acute change.

Dawn also highlighted the additional point that diagnosis of Sinus Tachycardia is often a clinical one — to be made on the basis of a clinical situation consistent with this rhythm (ie, dehydrated patient) — plus serial tracings that show gradual slowing of the rate as the patient is treated, with confirmation that partially hidden deflections in lead II were in fact representative of sinus P waves all along.

BOTTOM LINE: It is best to keep an open mind to the likely causes of a regular SVT rhythm. These most often include: i) Reentry SVT (ie, AVNRT; AVRT); ii) Atrial Flutter; iii) Atrial Tachycardia; and iv) Sinus Tachycardia. Sinus Tachycardia should not be forgotten just because one may not initially see clear sinus P waves — as with rapid rates, sinus P waves may sometimes be hidden within the preceding ST-T wave.

Does this ECG hint at another cause for the patient's agitation?

What a load of memories this case brings back to me from my nearly 40 years in the emergency department - and most of them not good! This is a very typical case for a Friday or Saturday night.

There are any number of reasons for agitation in a drunk, including concealed head injury, internal bleeding and hypoglycemia (in addition to the EtOH effects). But the first ECG gives another hint. Look at the T wave and the proximity of the P wave. In fact, the P wave is near the beginning of the downslope of the T wave. What is happening in the heart at this point? We have a ventricular systole that is occurring almost simultaneously (or simultaneously) with atrial systole. In a 60 year old, this may result in a backup of blood into the pulmonary venous circuit with consequent pulmonary congestion and hypoxemia. Also, the blood that refluxes back into the lungs doesn't contribute to the cardiac output, which may fall. Whenever you have a P-on-T phenomenon in an older patient - and he/she is agitated - don't forget the possibility of hypoxemia causing the agitation or confusion. Fluids appear to have helped in this patient - they are frequently dehydrated. But don't forget hypoxemia.