Jason's Blog: ECG Challenge of the Week for July 22-29. What are the causes of these patterns? 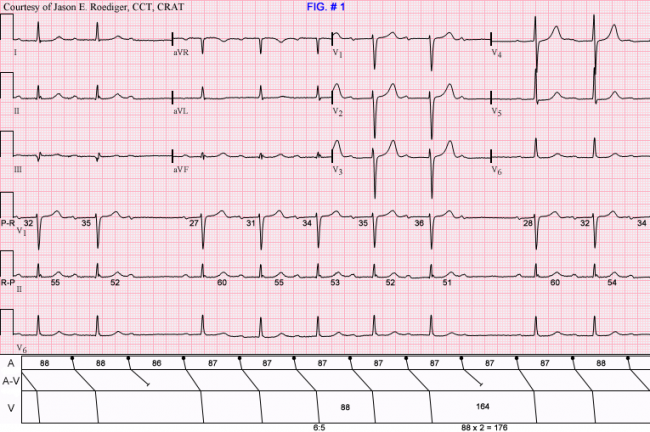 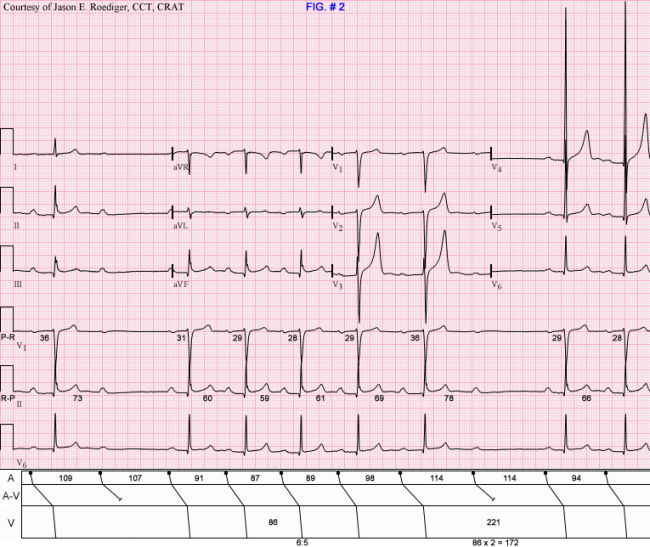 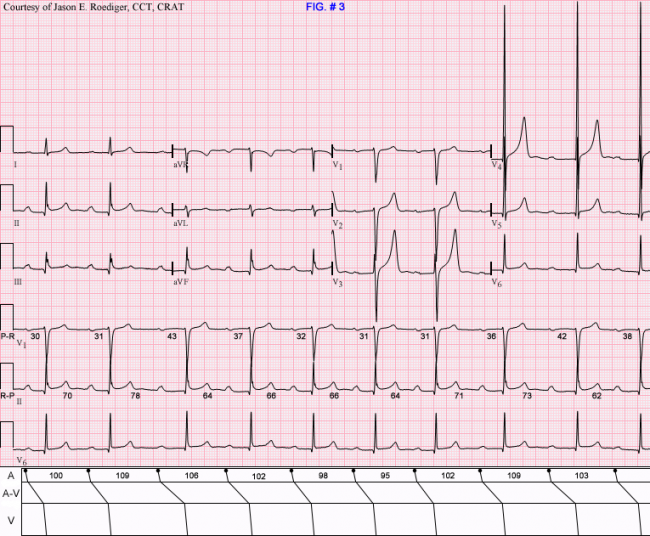 I recently performed both of these ECGs a few days apart during the same work week.  They were recorded on an outpatient basis.  It wasn’t until I recorded the second ECG that I realized I had a good pair of ECGs to illustrate this comparison.

At a superficial glance, both of these appear to represent the same thing and some people might even argue that both of these ECGs have identical interpretations but they would be wrong.  One of these represents a conventional example that is intrinsic to the heart and it's conduction system.  The other is a lesser-known example and is extrinsic to the heart.  Admittedly, they do share similar characteristics however there are several contrasting features as well.

The computer interpreted Fig. # 2 as:

DO YOU AGREE WITH THE COMPUTER?

What are the causes of the pauses and the "group beating"?  Do either of these patients need a pacemaker?

Ecg1 is a normal Wenckebach, but ecg2  represents a more serious problem. There is a constant PR interval with sudden block in AV conduction, besides the conducted complexes show PR prolongation. AV block occurs when we have a PP interval lengthening. This is characteristic of paroxysmal AV block which is very dangerous and usually indicates block below the AV node level (in the His-Purkinje system). The mechanism of this block must be a phase 4 block. I think he patient 2 needs a permanent pacemaker.

The first tracing shows fixed PP interval and PR interval except the first PR after the block. There is 2:1 AVB twice in this ECG. The RR interval in the block = 2 RR intervals during SR with 1:1 conduction. This is Mobitz type II AVB. This patient can be diagnosed bedside by simple exercise test which will increase the block, if yes then PPM is indicated.

Honorable mention goes out to marionurse and gpapi for spotting the Wenckebach in Fig. # 1 and to dr rshama for expertly picking up on the typical vagal response in Fig. # 2.


* NOTE:
All measurements on the ECGs and their respective laddergrams are in hundredths of a second.

Figures 1 and 2 both share some common ground:  (1) QRS complexes measuring less than 0.12s in duration, (2) prolonged P-R intervals, and (3) 6:5 ratios, but that's where their similarities effectively end.

In this case, the computer made the right call but as you will see below, the computer quite often makes big blunders.  This patient had only recently been newly documented in this A-V block a couple of weeks prior.  In hindsight, I should have suspected Lyme disease and suggested that possibility to the patient's PCP.  The PCP had a working theory that his atenolol was the offending drug causing this so it was discontinued.  Even after being off his beta blocker for nearly two weeks, the A-V block continued to persist.

*NOTE:  Figures 2 and 3 are from the same patient.
FIG. # 2
COMPUTER’ S INTERPRETATION:

COMMENTS:
Inexplicably, the computer completely ignores the "dropped" beats. The computer is programmed not to make the statement of "marked" sinus bradycardia unless it calculates the sinus rate at 49/min or slower. Here the computer averaged the sinus rate at about 47/min, but none of the independent sinus cycles even come close to dropping that low much less do they collectively average at that slow of a rate. A few minutes later I recorded two additional ECGs that were incorrectly interpreted by the computer as atrial fibrillation and junctional rhythm. Both of them were equally of high quality.

Dr. Barold calls this vagally-mediated A-V block. Notice the complete lack of reciprocal relationships between the R-P interval and their associated P-R intervals. In other words, R-P/P-R reciprocity is not present here as it was in Fig. # 1. With a monumentally long R-P interval of 0.78s, one would have expected the 8th sinus impulse to have optimal opportunity to conduct, however it does not. The shortest R-P interval of 0.59s subsequently enjoys the best conducted P-R interval of 0.28s. These paradoxical relationships between the P-R intervals and their antecedent R-P intervals are not at all typical of normal A-V nodal behavior.  The longest RR interval (221) encompassing the "dropped" beat is greater than twice the shortest RR interval (86); 86 x 2 = 172.

This patient had previously been documented as having chronic episodes of A-V block going as far back at a full decade ago so none of this was to be entirely unexpected.  The patient did, however, complain of some dizziness a few hours earlier the same morning I performed these ECGs.  In light of this new symptom, the on-call EP fellow was consulted at the request of the patient's PCP.

This 12-lead ECG was not originally presented in the initial Case of the Week but I've included it here for provide further clarification.  I recorded this ECG (Fig. # 3) just a couple of minutes after I recorded the ECG seen in Fig. # 2. Again, inexplicably, the computer has completely ignored the sinus P-waves and as a result has called this junctional rhythm.  In between the recording of Fig. # 2 and Fig. # 3, I performed a 3rd additional ECG that was interpreted by the computer as atrial fibrillation but looked virtually identical to Fig. # 3.

This is what the cardiology attending said about the patient seen in Figures 2 and 3:

ON THE 12-LEAD ECGS THEMSELVES: "EKG tracing review with our electrophysiologists. Findings of prolonging P-P interval and prolongation of PR interval are felt to be consistent with high vagal tone."

IN HIS PATIENT’S PROGRESS NOTE: "Based on increasing P-P interval and some increase in the PR interval, findings are felt to be physiologic secondary to high vagal tone."

Most healthcare providers know what a P-R interval is and how to properly define it. It's been my experience that far less people have ever heard of an R-P interval which is just as easy to understand but is largely ignored. In order to fully understand the Wenckebach phenomenon, as it pertains to A-V block, it is imperative that one understand R-P intervals. They are no less important than the P-R intervals are. It’s for this very reason that I’ve included two key definitions below.

Lastly, the issue of whether either of these patients are suitable candidates for implantation of a permanent pacemaker (PPM).  The answer is "no". The rational would be that both patients are asymptomatic and the anatomic level of the block is isolated to the A-V node (i.e., intranodal rather than infranodal). Type I A-V block and Vagotonic A-V block are not exactly the same thing. Electrocardiographically, they behave differently however electrophysiologically, they are both due to block in the A-V node.  It’s an oversimplification, but I often describe them as being somewhat like distant cousins in that they are related.