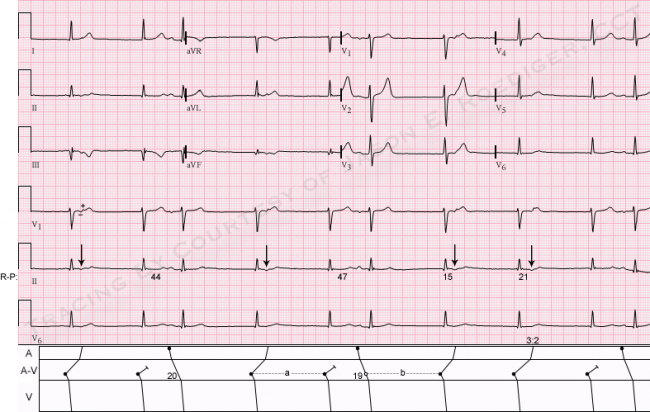 What well-known eponym can technically be applied to this 12-lead ECG?  HINT:  It takes on a somewhat unusual form here.

It was a bit tricky to confirm my suspicions and, as always, a ladder diagram proved invaluable. Cool tracing, especially since the "early" beats are actually the ones originating in the sinus node.

So, the underlying rhythm is sinus bradycardia at about 40 bpm.

This slow rate allows for a junctional rhythm to kick in at a rate of about 52 bpm. Usurpation by default.

This junctional pacemaker results in retrograde condution to the atria with varying 2:1 and 3:2 type I VA block, resetting the sinus node with each successful retrograde capture. It's also the source of the eponynm you're looking for: Wenkebach.

GEORGEOUS example! - THANKS for posting - : )

can you please show with arrows the p wave ? thanks

@milerphile - This week's ECG challenge was posted this past Saturday on March 16th.  The interpretation and laddergram will be posted this coming Sunday on March 24th.  I typically do this to allow an entire week's worth of time for members to respond.

Unfortunately I have read the answers already. Fascinating.

Looking forward to the laddergram.

Does this happen often? What to do with this clinically? Is it benign? Thank you!

COMMENTS:
From the sound of his detailed description, I’m certain the Vince’s laddergram looks identical to the one I’ve constructed.

Beats 7, 8, and 9 represent a trio of junctional escape beats with 3:2 retrograde V-A conduction to the atria.  Individually, beat 7 has an R-P’ interval of 0.15s.  Beat 8 has an slightly but measurably longer R-P’ interval of 0.21s.  Beat 9 does not conduct retrogradely and represents the equivalent of a “dropped” beat.  The progressive delay is taking place at an anatomic level above the junctional pacemaker.  Beats 1, 4, and 7 all display the same R-P’ interval.  Beats 2, 5, and 9 are junctional escapes that are not associated with retrograde P’-waves.

Beats 1 and 2 as well as 4 and 5 represent pairs of junctional escape beats with 2:1 retrograde V-A conduction.
The early beats are not atrial premature beats (APBs) but rather (as Vince pointed out) they are actually conducted sinus beats.

The only primary finding is the sinus bradycardia and treatment should be geared towards treating that.  The junctional escape rhythm is secondary.

As Vince also mentioned, the sinus node is unable to get a foothold or find a window of opportunity due to repetitive overdrive suppression by the consecutive discharges by the retrograde atrial activation.