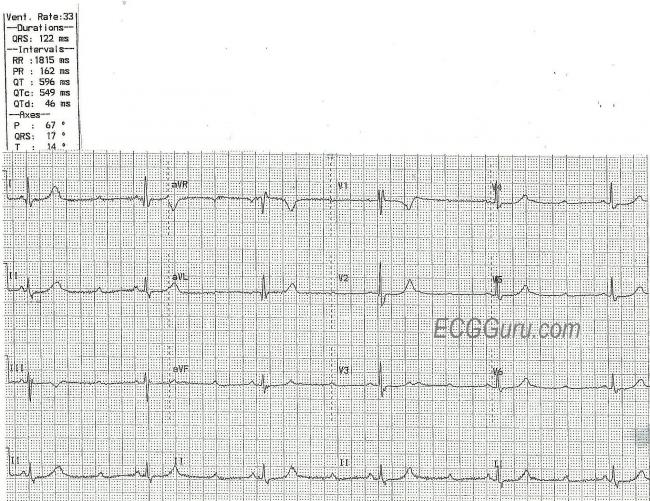 This ECG is taken from an elderly woman who complains of feeling weak and tired. We have no other clinical information, unfortunately.

There is an obvious bradycardia, with more P waves than QRS complexes.  Here is what we see:

*  Atrial rate is around 115/min. and P waves are regular and all alike.

*  Ventricular rate is around 35/min. and QRS complexes are regular and all alike.

What does this mean?  There is sinus tachycardia with second-degree AV block because the atrial rate is over 100/min, but not all P waves are conducted.  The AV block looks like a Type II (Mobitz II) block because the PR intervals are all the same.  This is a reliable indicator of conduction. (Not third-degree AVB).  The wide QRS complexes are due to right bundle branch block.  The ECG signs of RBBB are: 1) wide QRS; 2) supraventricular rhythm; and 3) rSR’ pattern in V1 and Rs, with a wide little s wave, in Leads I and V6.

Type II AV blocks are almost always blocks of the intraventricular conduction system.  That is, they occur in the region of the bundle branches.  A second-degree, Type II AVB is an “intermittent tri-fascicular block”.  That is, one or two of the three main fascicles of the bundle branches is constantly blocked, and the remaining fascicle(s) is intermittently blocked.  When all three fascicles are blocked, there is no QRS following the P wave. When the intermittently-blocked fascicle conducts, we see a QRS.  Often, that QRS will be conducted with a bundle branch block pattern.

In this case, there is a constant right bundle branch block.  The left bundle branch appears to be intermittently blocked, resulting in no conduction for two beats.  So, we would call this a 3:1 AV block.

What about the QTc interval? The QT interval (corrected to a rate of 60) is 549 ms.  This is prolonged in any age or gender. QTc intervals over 500 ms are associated with an increased risk of Torsades de Pointes.

Additional teaching points. This is a great ECG to show students how P waves can “hide” in T waves.  By carefully marching out the P waves, we can find the hidden ones, and also see how they affect the shapes of the T waves in each lead.  V3 shows the P wave occurring on the upslope of the T wave. It is also a good case for discussion of treatment of bradycardias.  At this rate, it is very likely that the patient is hemodynamically compromised.  Generally, emergency transthoracic pacing is used until a temporary transvenous or permanent transvenous pacemaker can be applied. Patients with Type II blocks do not often respond well to atropine because the problem lies in the intraventricular conduction system. Atropine exerts it’s rate-increasing effect in the SA and AV nodes and by blocking the vagus nerve. Type II AV blocks are generally considered serious and prone to worsening.  A complete heart block occurring at this anatomic level would have a ventricular escape rhythm rather than a junctional escape rhythm.  AV blocks occurring at the level of the AV node, such as second-degree, Type I  (Wenckebach) blocks, would be likely to have junctional escape. Prolonged QT intervals can be very serious, and the patient should be evaluated for reversible causes of the prolonged QT interval, while medications known to prolong the QT interval should be avoided.

Interesting tracing! I will highlight some additional comments:

i) The atrial rate is actually not completely regular when measured with calipers (at least not in the earlier part of the tracing). It is common with 2nd or 3rd degree AV block to encounter some irregularity of the atrial rate — called “ventriculophasic sinus arrhythmia”. Typically, the somewhat longer P-P intervals occur away from QRS complexes (thought to be the result of reduced perfusion, because these beats are not near QRS complexes) — and that is what we see here.

ii) Although the QTc does appear to be long — I calculate it at less than 549 msec., especially when corrected for the exceedingly slow ventricular rate. That said, clear distinction of both the P-P interval (beginning and end of P waves) — separation from U waves that may be present — and, distinction of ECG waveforms from artifact (which is prominent in several leads) — are all difficult to assess on this tracing. The presence of both bundle branch block and bradycardia make determination of the significance of the long QT that we see challenging. My suspicion is that improvement of the ventricular rate is likely for the most part to resolve the problem with the QT here — but additional monitoring and follow-up would be needed to know this with any certainty.

iii) I would describe the AV conduction disorder a bit differently. There clearly is 2nd-Degree AV Block — since sinus P waves that should conduct do not. I would further qualify this AV conduction disturbance as “High-Grade AV Block” — since consecutive P waves are not conducted (there is 3:1 AV conduction — with only one out of every 3 P waves being conducted). But we can not with certainty distinguish between Mobitz I vs Mobitz II on the basis of this single tracing — because we never see 2 consecutively conducted P waves in a row. Therefore, we cannot tell if the PR interval would increase if given a chance to do so … Although Mobitz I usually does not manifest with consecutively nonconducted P waves — it can do so on occasion. And it is also possible for Mobitz I to be associated with underlying RBBB. Failure to appreciate the need for at least some consecutively conducted QRS complexes on a tracing to define the rhythm as Mobitz II predisposes to misclassification of this conduction defect.

iv) Statistically, Mobitz I is far more common than Mobitz II 2nd-Degree AV Block. Although I’ve never seen statistics on this — in my experience, well over 90-95% of all 2nd-Degree AV Blocks are of the Mobitz I variety. The reason it is so important to recognize the minority that are true Mobitz II blocks, is the disturbing tendency of Mobitz II to sometimes very suddenly progress to ventricular standstill — which is why pacing of Mobitz II is essential.

v) Practically speaking — it does not matter in this case whether the conduction disturbance is Mobitz I or Mobitz II — since regardless, there is high-grade AV Block with marked bradycardia in an elderly woman with syncope. Assuming there is no readily correctable cause — pacing will almost certainly be needed.

vi) As per Dawn — QRS morphology is consistent with complete RBBB. Assessment of ST-T wave changes does not suggest acute or recent MI — although deeper-than-usual lateral Q waves are seen in leads I and aVL, and this could reflect a prior event.

NOTE: For those interested in review of the AV Blocks — Please check out my hour-long ECG Video on this topic — www.avblockecg.com — If you click on SHOW MORE at this link (under the video), you’ll see a detailed linked Contents to all in the video.