Normal ECG In A Young Adult 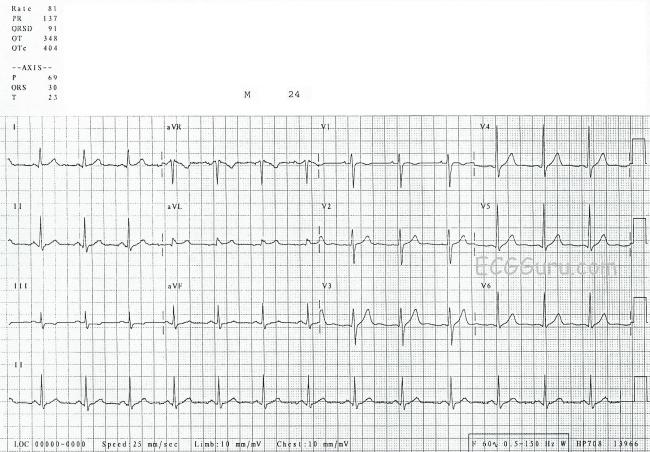 This ECG was obtained from a 24-year-old man who was seen in the Emergency Department for chest pain that was determined to be non-cardiac in origin.  He had a fever and cough, with pain on inspiration. His vital signs were within normal range, and he appeared well-perfused. There was no complaint of dizziness or syncope.

So, what does his ECG show?  The ECG should be interpreted in the context of the age and presentation of the patient.  He is young, and has been healthy all his life.  He is lean and reasonably fit.

The rhythm:  the rate is 81 bpm, and the rhythm is regular.  His P waves are upright in Leads I and II, and they are followed by QRS complexes.  The rhythm is NORMAL SINUS RHYTHM.

QRS frontal plane axis:  Normal axis, at around 30 degrees.  Lead II has the tallest QRS of the limb leads, which is an indication of axis in the normal range.  When the electrical axis travels towards Lead II, we can expect Lead aVL to be small, or even biphasic.

R wave progression:  There is normal R wave progression in the chest leads, with V1 having an rS pattern (mostly negative) and V6 having an Rs pattern – nearly 100% upright.  Leads V2 through V5 progress from negative to positive in an orderly fashion, with the transition occurring in V3.

ST segments and T waves:  There are very slight J point elevations in Leads I and aVL – almost unnoticeable.  There are equally unimpressive ST depressions in Lead III.  The shape of the ST segments is almost uniformly concave upward, or “smiling”, with Leads aVR, III, and V1 the only exceptions. There are very tiny U waves noticeable in Leads V2 and V3.  There are T WAVE INVERSIONS in Leads III and V1 (right-sided leads), and of course, in aVR, which is a right-sided and superior lead.  aVR should look like an upside-down mirror image of a combination of Leads I and II.

Interpretation:   Young people -  children, adolescents, and young adults – often have ECG features that would be concerning in older people, especially in those with cardiac symptoms.  It is important to know what ECG findings might be seen as normal variants in young people.  In this patient, the findings that might appear abnormal at first glance, but are normal variants, are:

*     Slight ST elevation, or sometimes depression, in some leads.  In young men, especially, ST elevation can even be pronounced without signifying cardiac injury. To read an interesting discussion on Early Repolarization Syndrome, click HERE.

There are many other findings you may see in young people, though not in this one:

*     Tall voltages in left-sided chest leads.  “LVH without the strain”.

This is a good ECG to use to remind your students to look at the whole picture – with patient presentation being very important!

In my opinion — one of the most common (and fundamental) mistakes in ECG interpretation is the failure to distinguish between “Descriptive Analysis” and the “Clinical Impression”. Instead, there is a tendency even among experienced providers to fuse the two — with resultant errors in both interpretation and clinical management. My approach emphasizes that there are TWO distinct steps in the interpretation of an ECG. The 1st step — is Descriptive Analysis, in which you simply describe what is seen. Dawn did this in excellent fashion for this case — with green print headings for the major parameters being assessed. I’d simply add that there is no sign of chamber enlargement for this 24-year old. The point to emphasize about this 1st Step — is that there is NO reasoning in Descriptive Analysis, since you are merely assessing the ECG for Rate, Rhythm, Intervals, Axis, Chamber Enlargement and QRST Changes without thought about what any of this might mean clinically.

It is only AFTER you have completed this 1st Step — that one should begin to contemplate the clinical situation. Given that the situation in this case is that of a young adult patient with non-cardiac sounding symptoms — the Clinical Impression for this ECG was correctly interpreted as being extremely unlikely to reflect an acute cardiac event.

My Clinical Impression would have been MUCH different IF the patient in question was older and/or with a history that was suggestive of a possible acute cardiac event. That’s because there IS clearly ST elevation in lead aVL. Although not overly apparent (because of the relatively low QRS amplitude in this lead) — there really is NO doubt that the J-point of the QRS in lead aVL is elevated, with a T wave that is a bit more-prominent-than-is-usually-seen with the tiny QRS that we see here in aVL. There is an almost “magic” reciprocal relationship between lead aVL and lead III — such that in many cases, the deciding factor for me that subtle inferior ST elevation is “real” and acute is provided by the finding of “mirror-image” ST depression in lead aVL. The corollary is also true — namely that acute inferior stemi becomes unlikely if there is no reciprocal ST depression in lead aVL. One should remember that lead aVL is the “highest” lateral lead — and, that there ARE isolated cases of acute high lateral infarction in which the only lateral lead showing clear ST elevation is aVL. As a result, IF the history in this case would have been worrisome for possible acute chest pain — then we would not be able to completely rule out the possibility of isolated acute high lateral infarction given the reciprocal ( = mirror-image) ST depression we see in lead III. In such a case, more careful history/physical exam, serial tracings, serum troponin and stat echo at the time of chest symptoms might be needed to attain sufficient certainty that this was not an isolated acute high lateral infarction.

BOTTOM LINE: Note that the Descriptive Analysis remains completely unchanged, regardless of the history. But, the Clinical Impression would be VERY different depending on whether the patient in question has non-cardiac symptoms or worrisome chest pain. The “bottom line” in this case — is that more than just the ECG is needed to arrive at a sufficient comfort level about whether or not this tracing might represent an acute cardiac finding.

NOTE: For those wanting more regarding the TWO Steps in Systematic ECG Interpretation — Please check out my ECG Blog #93 —

Anyone who aspires to being expert at interpreting 12-lead ECGs needs to very, very closely examine as many normal ECGs as possible. I think you can always find something to comment on, but it's by studying these "normal" ECGs that we develop a greater sense of when something is NOT normal. "Normal" can wear many different coats - even in the same patient on different ECGs. Here's a tip for developing a really good feel for NORMAL v. ABNORMAL: Don't try to study the entire ECG. Just focus on one or two leads at a time for a few weeks. I would strongly recommend starting with aVL and Lead III. Next would be V1 and V2.

I wholeheartedly agree with Dr. Grauer's comment on reporting the findings and the clinical assessment except that I use different terminology: I distinguish between "reading" an ECG and "interpreting" an ECG. Someone reading an ECG may note a first degree AV block, a right bundle branch block and an anterior hemiblock and pat themselves on the back for recognizing all those blocks. However, a person interpreting those findings would immediately see that a single diseased fascicle is all that is keeping the patient alive.

Regarding the findings in aVL... There is very subtle J point elevation in aVL and there is subtle ST depression in leads III and aVF (but mostly lead III). aVL and III are 150 degrees apart and two leads can't get further apart than that except for V1 and V8 or V9 which are much closer to 180 degrees. So aVL and III are reciprocal partners -- aVF and aVL much less so and II and aVL not at all. When there is acute epicardial ischemia in the inferior leads, look for reciprocal change in aVL. Lead I will not display much reciprocity since it is almost perpendicular to the inferior leads. If there is an inferior STEMI and you see ST depression in Lead I, you'd do better to think in terms of reiprocal change to a right ventricular infarction rather than explain the ST depression in Lead I as a reciprocal change to an inferior left ventricular wall STEMI.

As for the 24 y/o patient, a fever and cough and his age and lack of significant past medical history certainly argue very effectively against an incipient STEMI. HOWEVER, I would not rule it out until I ruled it out (pun intended)! A reciprocal change is a powerful validator for STEMI and one should always look very carefully for ST depression (or even ST flattening) when we suspect a subtle STEMI. Bear in mind, though, that reciprocal changes may appear well BEFORE or AFTER the ST elevation and even when the ST elevation is present, the reciprocal changes may be much more obvious and impressive! If the patient had the same Lead III and aVL in previous, non-symptomatic tracings, I would have no concerns. In this case, he could very well have had a mild myocarditis. You didn't say HOW a STEMI was ruled out - I hope it was more than a single troponin drawn an hour after the onset of symptoms.

One last caveat...  Never assume an unrelated diagnosis rules out STEMI. In my career as an internist and emergency physician, I found acute STEMIs lurking in sinus tachycardias, acute influenza, broken hips, nosebleeds, malignant hypertension, severe gastroenteritis, acute bladder obstructions and multiple, multiple cases of diabetic ketoacidosis. Also, as a young internal medicine resident, I was frequently called to the post-op area for post-TURP patients who had infarcted during or shortly after their surgery.