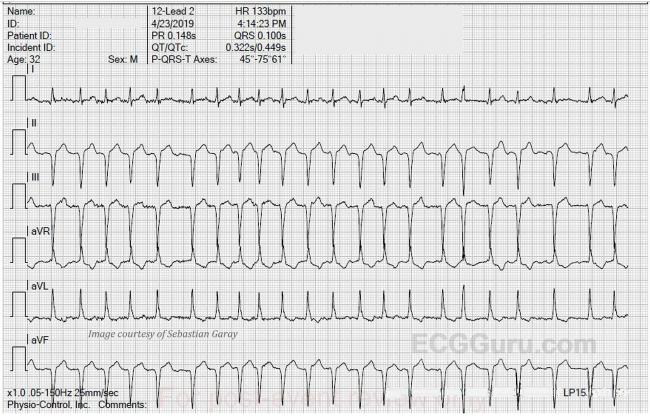 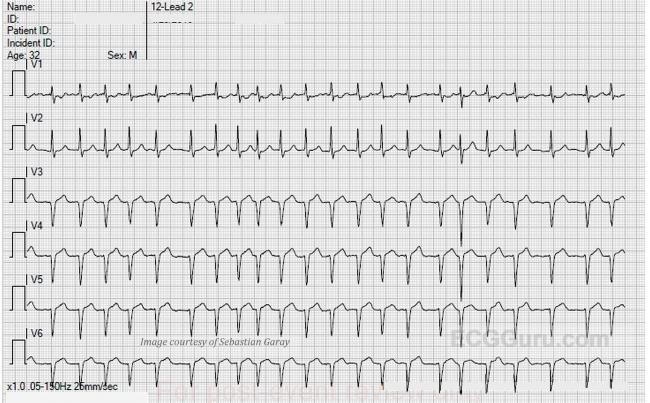 The Patient:     This excellent teaching case was donated to the ECG Guru by our friend, Sebastian Garay (who is an ECG Guru himself).  It was taken from a 33-year-old man who was complaining of chest pain and palpitations. He reported a similar episode about six months prior, but failed to follow up with cardiology. Was told by his medical care provider that he had atrial fib.

The ECG:      We are able in this case to provide a 12-lead ECG with each lead recorded for the entire width of the paper. This has the advantage of producing twelve ten-second rhythm strips.  Page one contains the limb leads, and page two shows us the precordial leads.

The rhythm is atrial fibrillation, with a heart rate of 133 bpm and an irregularly irregular rhythm. The QRS axis is extreme left at about -75 degrees.  This has caused Leads II, III, and aVF to be negatively deflected, and aVR and aVL to be positive. Lead I is biphasic, low voltage, and mostly positive, indicating that the axis travels almost perpendicular to Lead I, but slightly toward it.

The machine mistakenly gives us a reading for PR interval and P wave axis, even though there are no P waves.  The QRS is on the wide side without being abnormal at .10 seconds (100 ms). The QTc is within normal limits, although it might be considered “borderline”, with 431-450 usually considered borderline.

There appears to be very slight ST elevation in the inferior leads with no coving of the ST segment.  We see the same ST appearance in Leads V3 through V6.  The axis in the vertical plane, as indicated by the chest, or precordial, leads, is also unusual.  It appeared the same in multiple ECGs run by different people, so lead placement is presumed to be correct.  V1 and V2 are more upright than negative, which is not normal. The most common cause of upright QRS in V1 is right bundle branch block, which is not present here. Another common cause of a dominant R wave in V1 and V2 is right ventricular enlargement.  V3, V4, V5, and V6 all look very much alike, with no R wave progression, also a sign of right ventricular enlargement.  First glance appears to show pathological Q waves in many leads, but on closer inspection, there are small “r” waves.  Other signs of right ventricular enlargement, such as the “strain pattern” (ST depression and T wave inversion in right-sided leads), are not evident here.

So, to recap, this young and symptomatic man has had intermittent bouts of atrial fibrillation and chest pain.  We do not know of other symptoms, but the ECG is abnormal in many ways, especially for a young person. His symptoms also point to serious heart disease.

The Hospital Course:    The patient presented to the Emergency Department in atrial fib with a rapid ventricular response at 140/min.  His troponin levels were all critically high at 1.230, 1.30, 1.230, and 1.250. (Normal 0.00 – 0.40). Later that day, he converted to sinus rhythm with PACs. The next day, cardiac catheterization was performed.

Diagnosis:  Unspecified atrial fib and Type 2 M.I.  This is a term now being used for M.I. due to an underlying cause other than coronary artery plaque rupture and thrombosis.  In this case, loss of cardiac output due to atrial fib with RVR and NICM caused a defect in the supply-demand conditions in his heart.  Even with open coronary arteries, his heart could not keep up enough cardiac output to adequately supply the coronary arteries and the myocardium. The rapid rate increased the demand side of the equation, while not enhancing the supply side.

Patient Outcome:   The patient was discharged home with instructions to follow up with his primary care provider and cardiologist.  Even in the absence of heart failure symptoms, he was started on medications for failure, as well as medications for the atrial fibrillation.

Our thanks to Sebastian Garay for sharing this great non-STEMI example.

We are told that the patient is a 33-year old man who presented with chest pain and palpitations — and the ECG in the Figure (NOTE: For clarity — I have put both parts of the tracing together, and consolidated the rhythm strip to 2 leads). He apparently had a previous episode — and was told he had AFib, but it appears that follow-up and evaluation was not pursued.

This is a highly unusual ECG. Starting with the rhythm — the QRS complex is of borderline duration, with a supraventricular morphology. The rhythm is irregularly irregular — and P waves are absent — so this is AFib with a rapid ventricular response. Proceeding systematically — the QTc is probably not prolonged (it’s always difficult to assess the QTc at fast rates — and clinical significance of this interval often has little meaning when the rhythm is fast AFib). Criteria for LVH are not seen — but the predominant R wave in lead V1 without QRS widening could reflect RVH.

The most remarkable findings on this tracing relate to the markedly leftward axis (the QRS being entirely negative in each of the inferior leads) — and the bizarre progression of QRS complexes in the chest leads. Following predominant R waves in leads V1 and V2 — the QRS is entirely negative in the remaining chest leads! ST-T waves are nonspecific. Considering the heart rate, and QRS negativity in leads with prominent T waves — I don’t believe ST-T waves show acute changes.

IMPRESSION: This is a bizarre tracing — especially for a young adult without prior documentation of underlying heart disease! Assuming there is no lead misplacement or technical misadventure (and my understanding from our follow-up is that all leads were correctly placed) — I was at a loss to specify the anatomic abnormality. ALL I could say with certainty — was that, “there has GOT TO BE some serious form of underlying heart disease!"

Thoughts: In a young adult with an unexplained bizarre tracing — the differential turns to entities such as: i) WPW; ii) Adult form congenital heart disease; iii) Coronary disease; iv) Cardiomyopathy. But — delta waves are absent — the findings on this tracing don’t suggest any form of congenital heart disease to me — 7 QS complexes in the distribution shown here, in association with predominant R waves in V1 and V2 is not a pattern suggestive of prior infarction — and criteria for LVH are not met.

Follow-Up: Cath revealed marked right heart pressure (and presumably marked RVH?); mild coronary disease; and severe non-ischemic cardiomyopathy with global hypokinesis. I would have LIKED TO KNOW specifics on relative chamber size (Echo findings?) — to better appreciate this patient’s anatomy in the hope of understanding WHY this bizarre ECG pattern developed. BOTTOM Line: There is NO way to predict from this ECG what was found on cath. But such prediction is not the important point. Instead — the KEY teaching point from this case is recognition that the rhythm is rapid AFib and, that — Something is VERY Wrong with this patient’s heart. 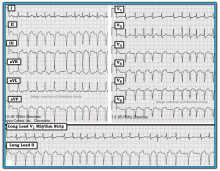 What a case! My thanks to Dr. Garay for this very challenging ECG. And Dawn, your analysis was most impressive!

As you stated, there is atrial fib with a rapid ventricular response. There is one bizarre QRS (6th from the right) that represents an Ashman phenomenon. The QRS axis is up, forward and left, a rather bizarre axis. There is clearly no RBBB since that requires a terminal R in V1 and there is none. A novice electrocardiographer may wonder how one can have a marked LEFT axis deviation while in the RIGHTMOST lead, aVR, the QRS is completely upright. Just remember that the QRS in aVR will be upright whenever the mean QRS axis in the frontal plane is more negative than -60°.

We learn a lot of ways to determine a lot of information about a patient's heart from the 12-lead ECG but we always presuppose an otherwise relatively nomal gross anatomy and - aside from a particular conduction issue - normal conduction throughout the rest of the heart. We expect certain signs to alert us to a chamber enlargement and we expect, for instance, that ST elevation in Leads I, aVL and V2-V6 to indicate an occlusion of the LAD. But, again, this assumes a normal gross anatomy and normal vascular anatomy.

But things don't always follow our expectations. Just as our colleagues, the radiologists, always fall back on the ubiquitous hedge, "clinical correlation recommended," in electrocardiography there is always "R/O cardiomyopathy" or "R/O anomalous coronary circulation." Obviously, based on the cath results, this ECG is an example of the former.

As Dr. Grauer suggested, we did not have enough pieces to this puzzle to complete the full picture before seeing the cath results.

For the right ventricle to usurp the LV as the predominant force in V1 and V2, it has to enlarge about 3 times its normal size, so with the elevated RV pressures there had to be some element of hypertrophy and loss of compliance of the right ventricular wall which would explain the right sided predominance in V1 and V2. I am a bit surprised that we don't see T wave inversions suggesting right ventricular strain. We typically see the QS pattern in Type C RVH, but the QS pattern in that situation begins with V1 and V2 and may (or may not) extend all the way across the precordium. It also only appears in people with very advanced emphysema.

The 12-lead ECG is an amazing tool but sometimes it just doesn't have all the answers.

I appreciate the time you both took to delve into this strange case. How I would love to have echo results and ongoing follow up. Since this case was accessed from an emergency setting, it is now lost to followup. I do hope the patient continues his care and responds well, but we will never know. Thanks again.