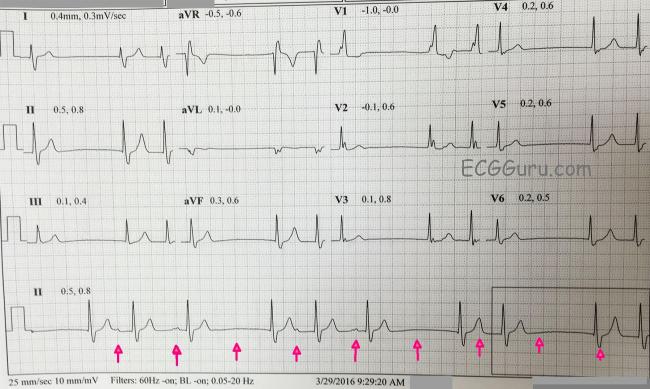 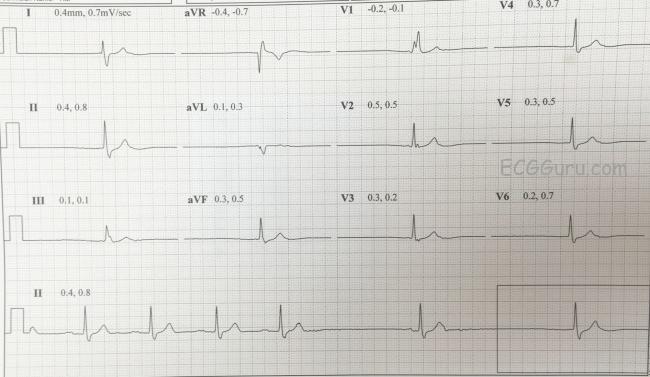 The second tracing shows a junctional escape rhythm with no obvious P waves (unsure because the P waves are small, and the 12-Lead is not concurrent with the rhythm strip at the bottom.)  It is interesting that the rhythm strip shows four consecutive sinus beats at just under 60 bpm, and with P waves that look different from the P waves on the first ECG.  This rate is similar, but not identical to, the sinus rate seen in the first ECG.

The bottom line for the clinician is that this patient, because he is symptomatic, requires a thorough workup.  If the cause of the arrhythmias proves to be cardiac in origin, a pacemaker may be required.

We welcome any and all discussions regarding this ECG, realizing that P waves are very difficult to evaluate, and that they are probably multi-focal.

Interesting tracing — but one for which definitive answer I believe is lacking, in part because of the very low amplitude of atrial activity. Additional monitoring would be invaluable for sorting this out. That said, my “numbered thought process” for assessing this case given the clinical information we are given would be as follows below:

1 — Please note that I have reversed the sequence in which I show these 2 tracings in my labeled diagram (attached). That’s because I think it easier to begin with the tracing that I put on TOP. I see underlying RBBB on the 12-lead ECG of this TOP tracing — but nothing acute and no recent infarct.

2 — I put RED arrows on the TOP ECG showing 4 initial sinus beats and then a ~ 2.0 second pause that is terminated by what may be an atrial escape beat. I used a WHITE (instead of RED) arrow prior to beat #5 — because it looks like this P may be of different morphology — but overall P wave amplitude is so tiny that I’m not sure of that. And it could be that we see a regular sinus P wave, but that before this sinus P can conduct beat #5, a junctional escape beat occurs. We definitely know that the next beat (#6) is junctional escape. So the pause between beats #4-5 may simply be a prolonged sinus pause …  (I don’t think I am seeing blocked PACs anywhere, albeit the tiny amplitude of atrial activity).

3 — In the BOTTOM ECG — We have an escape-capture (or perhaps better stated, double capture) phenomenon. Beats #1,4,7,9 look to be junctional escape. Of interest — the P-P interval in the Bottom tracing for consecutive RED arrows looks to be the same as the P-P interval for the first 4-beats in the Top ECG. So I suspect we have more of the same phenomenon that we saw in the Top ECG — namely junctional escape (that was initiated by a sinus pause) — and then resumption of an unreliable sinus pacemaker. There looks to be at least “potential for Wenckebach” — in that there is PR/RP reciprocity for beats #2,3; 5,6 in the Bottom tracing — and perhaps that is all we are seeing (ie, beats #2 and 5 having a relatively longer PR interval because these P waves occur closer to the refractory period of the preceding beat — with some “recovery” producing the shorter PR interval for beats #3 and 6). That seems to change later on in the Bottom tracing, because I don’t see P waves prior to beats #8 and 10 (unless they are hidden within the preceding T wave). Or, perhaps there is intermittent SA block (accounting for similar P-P intervals until we lose subsequent P waves … ).

Bottom Line: I’d make sure there is no sleep apnea and would check on thyroid function. I’d ask about beta-blocking eye drops which can in part be systemically absorbed … But if all this was negative, and there was no indication of recent ischemia/infarction — then I would suspect this patient has Sick Sinus Syndrome given the overall slow rate with sinus pauses — and given the symptoms he is having. This tracing is not typical for either Mobitz I or SA block, and additional monitoring/work-up will be needed to confirm a diagnosis of Sick Sinus — but I would not be at all surprised if this patient ends up with a pacemaker. 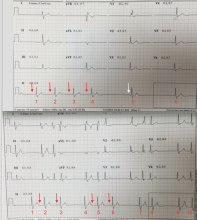